Pandemics Get Forgotten. But Not at This Museum.

Glimmerglass Creates Magic in Its Own Backyard

With world leaders set to gather for the COP26 climate summit, Francis calls for ‘radical’ action.

Why Is Everyone Else Quitting?

Nostalgia Plus Time Equals a New Breed of Collectible Cars

Greece Is Getting Rewired for the Future

NAXOS, Greece — On the windswept western tip of one of Greece’s largest islands, an unassuming stone building above the Aegean Sea has become an …

NAXOS, Greece — On the windswept western tip of one of Greece’s largest islands, an unassuming stone building above the Aegean Sea has become an unlikely outpost in this country’s fight against climate change.

Camouflaged inside is a new power station linked to an 180-mile undersea electricity cable that ties Naxos to a chain of other breezy vacation playgrounds, allowing the islands to ditch their oil-burning generators for renewable power from Greece’s abundant wind and sun.

Nearby islands have become zero-carbon laboratories for companies like Volkswagen to fan out electric cars and wire communities for clean energy. Changes are underway on the mainland too, where dirty lignite coal mines that powered Greece for decades are being fast-tracked for closure.

The push for a transition to clean energy would seem a herculean task for Greece, a country of around 10 million that recently emerged from a devastating decade-long debt crisis and still leans heavily on fossil fuels for power. 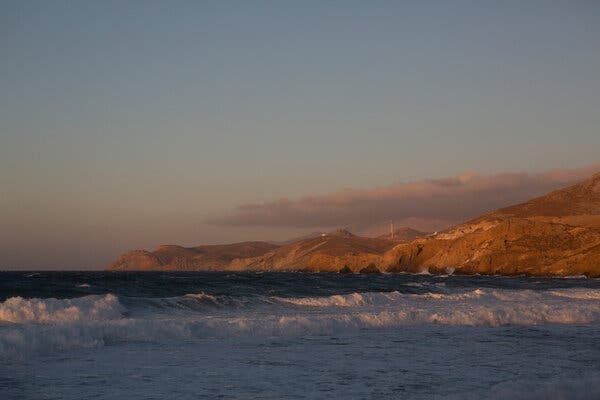 Two wind turbines on a hill outside the main town of Naxos.

But as the European Union seeks to be a global leader in the race to stop climate change, Greece is betting that turning toward a carbon-free future can reshape its economic destiny.

“The growth of the economy is inextricably tied to making ourselves as energy independent as we can,” said Prime Minister Kyriakos Mitsotakis, a conservative who took office in 2018 vowing to rebuild Greece, in part based on an environmental agenda.

“Greece can be a paradigm of how energy transition and climate action can create jobs and sustainable growth,” he said in an interview.

Whether Greece succeeds matters. As wealthier European countries like Norway and Denmark make strides re-engineering their economies to be more climate friendly, Greece offers a test case of whether — and how effectively — Europe’s poorer states can turn away from fossil fuels while providing buffers for those threatened by the change.

The transformation is necessary and strategic. Greece’s economy is forecast to grow 3.8 percent this year after shrinking by nearly 10 percent during the pandemic and by a quarter during the debt crisis. But the government still needs to attract billions in clean-energy investments to helptackle its lingering mountain of debt and a 14 percent unemployment rate, and to build a more solid foundation for future growth.

Greece is getting a powerful financial boost to underwrite these efforts: 30 billion euros (nearly $35 billion) — equivalent to a fifth of Greece’s economy — from a European Union recovery fund designed to power a rebound from the coronavirus pandemic.

The Naxos substation, which is hidden inside the specially-designed stone house so as not to be an eyesore for tourists.
Camouflaged inside is a new power station linked to an 180-mile undersea electricity cable that ties Naxos to other islands.

The shift has already raised tensions. Villages are trying to block wind turbines, arguing they will turn away tourists — Greece’s main source of income. Citizens are agitating over the loss of mining jobs. And a spike in the price of natural gas, a fuel being used to bridge the switch from oil to renewable energy, is hitting the poorest households, forcing the government to subsidize costs.

Yet the bruising toll of climate change is creating urgency. This summer Greece was ravaged by the worst wildfires in years, as temperatures reached 46 degrees Celsius, or 115 degrees Fahrenheit. Homes were razed and thousands of people were displaced. Almost no corner of Europe was untouched by extreme weather, be it fire, flood or heat.

Nikos Margoutas, a project manager for Independent Power Transmission Operator, the state utility overseeing the energy transition in Naxos.
The cables link Naxos to Paros and Mykonos, carrying electricity from the mainland’s grid.

The underwater cable plugged into Naxos is central to Greece’s strategy to attract critical renewable energy investments. The idea is to build Greece’s incomplete infrastructure to cycle more solar and wind power through the national grid. Greece aims to replace 60 percent of coal-generated electricity with renewables by 2030 and be climate neutral by 2050.

The shift has been a long time coming. While turbines and solar panels are scattered across the country, Greece clung to oil and lignite coal for decades as vested Greek oil industry interests thwarted change. Greek islands used oil-burning power generators that cost billions to run and spewed over 2.8 million tons of carbon a year. Investors were spooked by impenetrable bureaucracy and waits of up to 10 years for licenses to build wind or solar farms — something the government has vowed to streamline.

A natural gas plant in Megalopolis. Greece needs natural gas to replace coal until the technology exists to store sun and wind power.

Around half of Greece’s energy was still fueled by petroleum products in 2017. But renewable energy and imported natural gas are now grabbing a greater share.

The undersea cable will stitch together Greece’s most popular tourism islands, including Mykonos and Santorini, linking them to the mainland power grid for the first time and more than quadrupling their energy capacity, said Nikos Margoutas, a project manager for the state utility operator overseeing the shift. Another cable described as the world’s longest will eventually connect the mainland and Crete, Greece’s largest island and the one with the most promise for solar and wind energy.

On a recent afternoon, the hair-raising sound of high-voltage electricity crackled above a howling wind outside the Naxos substation, which was hidden inside the specially-designed stone house so as not to be an eyesore for tourists.

“We’re laying the groundwork for Greece’s green future,” said Mr. Margoutas, sweeping his arm toward the azure expanse of the Aegean.

The cable has already improved life on the island in one notable way. For years, blackouts were routine, cutting the lighting at the iconic Temple of Apollo, forcing restaurants to throw out refrigerated octopus and preventing holidaymakers from charging their cellphones.

Since the cable arrived, there have been no blackouts.

Dimitris Lianos, the mayor of Naxos, said there have been no blackouts since the cables arrived.

“It was romantic — you could see the stars,” recalled Dimitris Lianos, Naxos’s mayor. “But it was a big problem for businesses and visitors.”

A parallel programaims to turn around 20 small islands into zero-emission testing grounds for companies partnering with the Greek government.

Volkswagen is replacing cars and public transportation on the island of Astypalaia, with electric vehicles powered by solar energy sources that it is installing. On Halki, an island of only 300 residents, the French energy giant Vinci is erecting photovoltaic fields to power street lighting, homes and businesses at low or no cost.

Yet for all the benefits of a green energy transformation, a tangle of problems remains.

Environmental groups say the government is cleaning up with one hand while polluting with the other.

An electrical plant powered by coal is set to close next year in Megalopolis, Greece.

They cite massive natural gas exploration projects taking place in the Ionian Sea near Crete, Corfu and other islands, which Mr. Mitsotakis has defended as necessary to obtain a resource critical to the clean energy transition. New licenses were granted to Exxon Mobil, Total and Hellenic Petroleum during the financial crisis as Greece faced staggering debts. Some potential drilling grounds near Turkey have ignited geopolitical tensions.

Others are unhappy with the idea of mammoth wind turbines disfiguring the landscape that draws tourism — the one activity that Greece does well. Seven people were reportedly hurt last month on Tinos island — known in Greek mythology as home to the god of the winds because of its breezes — after police clashed with protesters trying to block a truck from carrying a giant wind turbine blade up a mountain.

The backlash on the islands has become so stormy that officials are thinking of installing floating turbines and solar platforms in the sea.

“The government can’t just come in with hubris and say, ‘We have investors and we’re going in,’” said Nikos Charalambides, the head of Greenpeace Greece, which supports the moves toward renewable energy but says citizens aren’t being adequately consulted.

On the mainland, over 8,000 mining jobs are threatened by Mr. Mitsotakis’s plans to close all but one of Greece’s 14 lignite coal-fueled power generators units by 2023. In response, the government has vowed to transform the hardest-hit areas, including Western Macedonia and Megalopolis, a coal town in the Peloponnese, into sites where new types of work would emerge.

The plans are ambitious, calling for carbon-neutral farming, photovoltaic fields, sustainable tourism and entrepreneurial start-up campuses that would theoretically modernize Greece — and create up to 200,000 new jobs in energy and the environment.

Critics are skeptical. At the same time, Greeks understand that the country has no choice but to move forward, said Mr. Charalambides of Greenpeace.

“This is an opportunity for the economy and society to create new jobs and a new perspective,” he said.

“Greece has been so depleted by the financial crisis, and so inefficient as a state,” he added. “If the green energy transition works here, there is nowhere in Europe where it can’t work.”

A lignite coal mine in Megalopolis. The government plans to replace it with a solar power farm.

Andrew Garfield Can’t Remember Who He Was Before ‘Tick, Tick … Boom!’

U.S. agrees to drop tariffs on countries that imposed digital services taxes as a global tax overhaul moves ahead.

Cambodia Says the Met Museum Has Dozens of Its Looted Antiquities