Covid Vaccines Produced in Africa Are Being Exported to Europe

As R. Kelly’s Trial Begins, Here’s a Timeline of the Allegations

Britney Spears’s Father Fights Effort to Remove Him as Conservator

Trudeau Seeks a Fresh Start, but Many Voters See a Power Grab
Anasayfa » Güncel » At Selfridges, Weddings Are on the Fourth Floor

At Selfridges, Weddings Are on the Fourth Floor

LONDON — When Carlene Noel and Danny Sains exchanged vows on Saturday they weren’t just merging their two families into one, they were also …

LONDON — When Carlene Noel and Danny Sains exchanged vows on Saturday they weren’t just merging their two families into one, they were also marking an unusual expansion of the offerings of a British department store. The new Mr. and Ms. Sains got married on the fourth floor of the stately flagship of Selfridges, on London’s Oxford Street.

Nestled behind the children’s clothes section, in what used to be a lounge where international shoppers could claim back the tax on their purchases, the intimate ceremony was held under a lighted arch in the store’s new wedding venue — the first use of Selfridges’ wedding license, attained earlier this year.

“This is way better than having a big wedding,” Ms. Noel said. “It’s very unique and no one’s done it before. And I love being the first and doing something different. I love it.”

Selfridges, a high-end department store, has a reputation for embracing retail theater and “experiences” — things like outdoor SoulCycle classes, a virtual reality playgroundand a movie theater — among the offerings at its monumental flagship store in central London. It was opened by Harry Gordon Selfridge in 1909, a transplanted American who was a pioneer in using art exhibitions, in-store restaurants and rooftop mini-golf to attract shoppers. 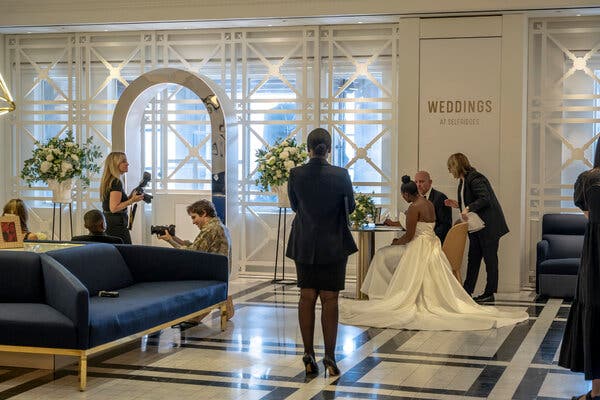 The new Mr. and Ms. Sains sign their names after the ceremony. The store’s wedding venue is in what used to be a lounge where international shoppers could claim back the tax on their purchases.Credit…Andrew Testa for The New York Times

But the store is also trying to avoid the fate of other longtime retailers that have failed to survive the rise of online shopping and last year’s pandemic lockdowns. A few blocks away, among smaller shuttered storefronts, is the former flagship of Debenhams, a more midmarket department store chain dating to the 18th century that collapsed this year.

The expansion into weddings came as Britain exited lockdowns in the spring and Selfridges was trying to determine what its customers needed. “Weddings were such a topic at that moment,” said Rebecca Warburton, the director of events and customer experiences. More than a quarter million weddings had been postponed in 2020 because of the pandemic,an industry group estimated. More venues were desperately needed.

“Why not offer a solution to our customers where we could host these amazing weddings?” Ms. Warburton said.

Selfridges already has manicurists, hairdressers, makeup artists, barbers, stylists, clothes to rent and buy, jewelry, restaurants and bars. Now, it has turned these services into wedding packages, where couples can invite up to 20 guests. Prices for the ceremonies start at 2,250 pounds (about $3,100) and then increase according to “bespoke experiences tailored to each couple,” the company said.

“That’s another reason why Selfridges really did tick the box for us, because we can do everything under one roof,” Ms. Noel said in an interview on Friday.

After the ceremony, Ms. Noel, 40, and Mr. Sains, 47, were expecting to take photos around the store and then have a meal at one of Selfridges’s 10 restaurants with Ms. Noel’s son and Mr. Sains’s two daughters.

“This is way better than having a big wedding,” Ms. Noel said, adding, “I love being the first and doing something different.”Credit…Andrew Testa for The New York Times

Few people can count their former workplace as their wedding venue: Ms. Noel worked there as a men’s wear personal stylist for a few years from 2003. She’s loved the store since then. “There’s always something fresh, something new.”

By doubling down on its handful of physical stores, Selfridges is trying to detach itself from the relentless closing of brick-and-mortar outlets as online sales soar. In Britain, over the last year and a half, there has been a net closing of more than 15,000 stores that were part of chains. And online sales are now about a quarter of all retail sales, up from about a fifth before the pandemic.

Other retailers are taking increasingly unusual steps to attract customers.

In New York, Saks Fifth Avenue is turning parts of its stores into co-working spaces with WeWork. John Lewis, a British department store chain, is planning to build 10,000 rental homes, mostly on its existing property. And Harrods, Selfridges’s larger rival, has opened its first stores in Britain away from its London flagship — two stand-alone beauty halls.

Selfridges has been broadening the experiences part of its offerings for years, said Lucie Greene, a futurist and the former director of the innovation group at J. Walter Thompson.

“For some time now, it’s used unexpected or creative brand activations and collaborations and cultural programming not just to bring people into the store, like a sort of immersive magazine, but also to establish its full authority in understanding cultural and consumer trends,” she said.

The department store has also benefited from being a small chain, Ms. Green added. It has just three other stores in Birmingham and Manchester, which allows for more creativity.

Among the latest examples: the Oxford Street store has an area dedicated to secondhand items, and another offering clothes for rent, both reflecting the company’s sustainability campaign.

“The levers of what makes you buy something are changing and increasingly it’s being led by service and experience or being part of a community,” Ms. Green said.

Still, the pandemic and other changes roiling the industry have taken a toll. In July 2020, the privately held company cut 450 employees, about 14 percent of its work force. Since the death in April of Galen Weston, the Canadian billionaire who bought Selfridges in 2003, the chain has reportedly been put up for sale with a £4 billion price tag for the British and Irish stores in the group.

It has also undoubtedly been hurt by the loss of international tourism, which has made only a tepid recovery this year; before the pandemic, international visitors made up 40 percent of Selfridge’s shoppers. Domestically, Selfridges faces a challenge because London’s Oxford Street has come less of a destination, with foot traffic still down by more than a third, and one out of five shops permanently closed, the local authority said.

Even if the past year and a half has been painful for many retailers, the luxury market is expected to recover by the end of 2022 or early 2023, according to a report by Bain & Company. At Selfridges, so-called social spaces, used for restaurants and experiences are often less profitable than a luxury concession, according to a report by The Business of Fashion. But these features, including a garden center and live music from buskers, have been critical to the chain’s post-lockdown identity.The London store has an “experiences concierge,” which will be expanded to the regional stores later this year. Instead of gift vouchers for products, people can now gift experiences, including skateboarding lessons and cinema trips.

Ms. Warburton said she gets her inspiration from the founder, Mr. Selfridge, and his decision, at one point, to stage a play on the roof of the store. “We always talk about unexpected locations,” she said.

In keeping with that theme, Ms. Noel and Mr. Sains’s wedding day was expected to end at the store’s in-house movie theater, where the family will watch (and probably sing along to) the 1978 classic, “Grease.”