Review: ‘The Most Happy Fella,’ Sliced, Diced and None Too Pleased

Fears of a ‘Bottleneck Recession’: How Shortages Are Hurting Germany

Gangs Rule Much of Haiti. For Many, It Means No Fuel, No Power, No Food.

Hissène Habré, Ex-President of Chad Who Was Convicted of War Crimes, Dead at 79

Nia DaCosta on ‘Candyman’ and the Power of Terrifying Legends
Anasayfa » Güncel » Plant-Based Foods Expand, With Consumers Hungry for More

In the fall of 2018, Jenny Goldfarb suddenly had a craving for a corned beef and pastrami sandwich. For Ms. Goldfarb — who grew up in a New York …

In the fall of 2018, Jenny Goldfarb suddenly had a craving for a corned beef and pastrami sandwich.

For Ms. Goldfarb — who grew up in a New York Jewish deli family — it was the classic sandwich of her youth. But her yearning came with a hitch: She is now vegan.

So she started working with wheat protein, adding beets for a “meat” color, and dipping the mixture into different brines and spices. After a couple of months, she had come up with a vegan substitute. She took her vegan corned beef from her home in the San Fernando Valley to a Los Angeles deli, which placed an order for 50 pounds. She cried tears of joy in her car.

These days, Ms. Goldfarb is shipping orders for up to 50,000 pounds of her Unreal Deli corned beef, turkey and, most recently, steak slices to grocery stores all over the country.

“We just got the green light from Publix,” Ms. Goldfarb said. “They want the retail packages, but also they want to put it in their delis.”

Riding the waves of success of soy, oat and other alternatives to milk, as well as vegan burgers made by Beyond Meat and Impossible Foods, a broad variety of plant-based foods are showing up on restaurant menus and in grocery store aisles. And now more companies — from small upstarts to established brands — are looking to get in on the action.

This summer, Panda Express started putting orange chicken made with Beyond Chicken from Beyond Meat on menus at some of its U.S. locations. Pete’s Coffee is selling a vegan breakfast sandwich made with mung-bean-based Just Egg. A New York City soft-serve shop, 16 Handles, collaborated with the popular Oatly drink to create a line of vegan sweets in flavors like chocolate, chai tea and iced latte. And the Long John Silver’s seafood chain tested plant-based crab cakes and fish fillets at five locations in California and Georgia this summer. 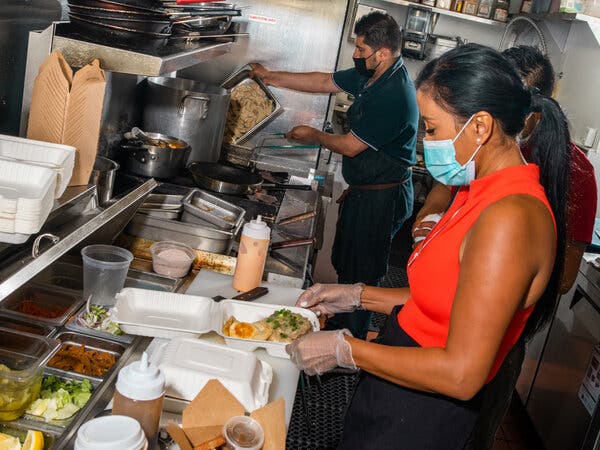 When Eleven Madison Park, a Michelin-starred restaurant in Manhattan, reopened in June after closing more than a year ago because of the pandemic, it did so with a new, plant-based menu.

“It started with a plant-based burger, but now plant-based options are becoming available in all sorts of categories,” said Marie Molde, a dietitian and trends analyst at the research firm Datassential. “We think plant-based chicken is really going to take off.”

Restaurants and grocery stores are responding to the changing demands of consumers who are moving away from eating meat. Sales of fresh fruit in grocery stores have climbed nearly 11 percent and fresh vegetables 13 percent since 2019, according to Nielsen IQ. While only a small percentage of Americans are true vegans or vegetarians — in a 2018 Gallup poll, 5 percent said they were vegetarians — that’s not the audience these new companies and products are chasing.

Rather, they are going after the taste buds of the vegan-curious or so-called flexitarians, a much larger segment of Americans who are seeking to reduce the amount of meat they eat. Some are shying away because of animal-cruelty concerns, while others say the environment or perceived health benefits are factors. (Whether the plant-based foods, many of which are highly processed, are healthier is subject to debate.)

“This is not for vegans only — that would be too tiny of a market,” said Mary McGovern, the chief executive of New Wave Foods, whose shrimp made from seaweed and plant proteins will be on restaurant menus this fall.

Ms. McGovern sees a much broader audience of millennials, flexitarians and others interested in trying new plant-based foods. “I’ve been in the food industry for 30 years, and I’ve not seen anything like the tectonic change we’re seeing in the market now,” she said.

Just a few years ago, plant-based burgers were a novelty. These days, the Beyond Burger and the Impossible Burger appear on roughly 5 percent of the menus of all restaurants around the country, and 71 percent of Americans have tried a plant-based burger or other meat alternative, Ms. Molde said.

In grocery stores, sales of alternatives to cheese, dairy milk and fresh meat have been growing at robust double-digit rates for at least the past two years, according to Nielsen IQ. Almond, oat and other nondairy products make up 14 percent of milk sales.

Restaurants are jumping onto the bandwagon with both feet. Orders for plant-based products from large food distributors were up 20 percent in June from the same time in 2019, according to the NPD Group.

Still, appealing to flexitarians or occasional vegan consumers can be tricky. They know the taste and texture of real shrimp and turkey, and if vegan alternatives are not tasty, they won’t be back.

Megan Schmitt of Chicago shifted from vegetarian to vegan about four years ago and recalled her disappointment with the vegan cheese on the market.

“The stuff tasted like cardboard or rubber,” she said. “If you hadn’t eaten cheese in years, it would be fine, but it was not going to satisfy anybody’s taste buds that were switching back and forth from the real stuff.”

So Ms. Schmitt started fermenting a variety of nut-based concoctions, later moving to soy for her Cheeze & Thank You artisanal cheeses, including black garlic truffle fontina and dill havarti. They will be available in most Whole Foods stores in the Midwest this fall.

“I like to view my cheese as a canvas,” Ms. Schmitt said. “It’s my form of art. I want my product to be a feast for the eyes as well as the mouth.”

Reina Montenegro found herself in a similar situation. For six years she tried to create a vegan version of the Spam that she grew up eating. “Spam was the last thing I ate before I went vegan, because I knew it was something I would never eat again,” she said.

Then she heard about OmniPork Luncheon, plant-based oblong pieces that look like Spam and are produced by OmniFoods of Hong Kong. For the better part of a year, Ms. Montenegro said, she pestered executives at the company to get the product to the United States. Finally, in April, her restaurant, Chef Reina in Brisbane, Calif., which specializes in vegan Filipino comfort dishes, became one of a dozen restaurants in the United States using OmniPork products.

“Right away, we sold out of it,” Ms. Montenegro said. “The only thing that’s different with the OmniPork product is the sodium level — it’s lower than the real thing. But as far as taste and texture, it’s perfect.”

OmniFoods said last month that its vegan pork products were now available at Sprouts Farmers Market locations and that Whole Foods stores in 16 states had started selling some of its products.

Ms. Goldfarb of Unreal Deli initially planned on introducing her vegan deli meats through restaurants. By early last year, she had deals to supply a variety of restaurants, stadiums and universities. But when the pandemic hit, she quickly planned to sell in grocery stores instead.

Now Ms. Goldfarb is back in talks with a number of restaurant chains, she said.

“The vegans and vegetarians, they’ll be in your corner. The flexitarian is who we’re working to capture,” Ms. Goldfarb said. “We’re trying to speak to someone who has been eating meat their whole life but now wants to have an alternative two or three times a week.”

She also has her next vegan deli meat target in sight: ham.

Dr. Gino Strada, Who Brought Health Care to the Desperate, Dies at 73

5 Minutes That Will Make You Love the Trumpet

‘The Contender’ Lit Me on Fire. Now It’s a Cringe Factory.
ZİYARETÇİ YORUMLARI