Depth Won the Premier League. The Next Step Will Cost More.

Onstage, the Pen Is Usually Duller Than the Sword

Creating Culture in a W.F.H. World: How 3 Small Businesses Did It

‘There’s Still So Much to Unearth’ in ‘Pass Over’

Agony and Ecstasy on the Scottish Archipelago of St. Kilda

For the first hour or so, the water was relatively calm. After departing from the small fishing village of Stein on the Isle of Skye, we sped …

For the first hour or so, the water was relatively calm. After departing from the small fishing village of Stein on the Isle of Skye, we sped through a strait known as the Little Minch toward the main band of the Outer Hebrides, the thick curl of rocky skerries that hovers like an apostrophe over the northwestern coast of mainland Scotland.

But as we pressed onward, traveling west beyond the islands of North Uist and Lewis and Harris, the water suddenly grew rougher. Here, fully exposed in the North Atlantic Ocean, we had no refuge from the swells: Every few seconds, for more than two hours, the hull of our tour boat slammed against the oncoming waves with enough force to rattle my teeth.

I looked to my right, across the boat’s narrow aisle, and saw my brother and sister huddled uncomfortably in their seats. None of our fellow passengers — there were around 12 of us, all told, crammed into a surprisingly small boat — looked happy. But my siblings, clutching their disposable vomit bags, looked ill.

(“Ill is an understatement,” recounted my sister, Emelia, with a laugh. “I’d say we looked doomed.”) 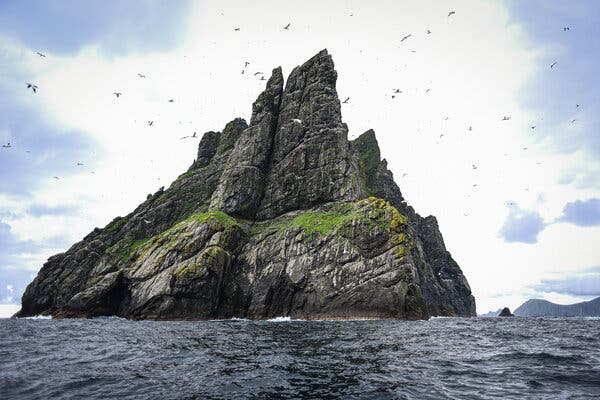 The outlying island of Boreray. The archipelago of St. Kilda is one of the most important breeding grounds for seabirds, including northern gannets, Atlantic puffins and northern fulmars, in the North Atlantic.

Hirta, the archipelago’s largest island, comes into view in the distance — between Boreray, on the left, and the sea stack known as Stac an Armin, on the right. At center, in front of Hirta, is the sea stack Stac Lee.

For centuries, the archipelago of St. Kilda, one of the most remote areas of the British Isles, has electrified the imaginations of writers, historians, artists, scientists and adventurers.

Some 40 miles west of the chief islands of the Outer Hebrides, St. Kilda has a tantalizing history, replete with a rich cultural heritage, fiercely independent people, distinctive architecture and haunting isolation — as well as disease, famine and exile.

Recent archaeological research suggests that the main island, Hirta, which is around 2.5 square miles, was inhabited as far back as 2,000 years ago. Its last full-time residents, 36 in total, were evacuated to the mainland on Aug. 29, 1930, their community and their way of life having become unsustainable.

Designated as a dual UNESCO World Heritage Site for its natural and cultural significance, St. Kilda is now owned, managed and protected by the National Trust for Scotland, whose staff — occasionally alongside other volunteers and researchers — occupies Hirta for several months of the year. Contractors for the British Ministry of Defense also spend time on the island, where they operate a radar station.

Stone sheepfolds and stone storage huts, called cleitean, on Hirta. The igloo-shaped cleitean, unique to St. Kilda, were used to dry and store a range of food and goods, including seabirds, rope, eggs, peat fuel and potatoes.
Relief took hold once we made it ashore. My sister, Emelia, and brother, Nicholas, laughed off their recent tour-boat miseries on the way to Conachair, the island’s highest point.
The ascent toward Conachair.

For most of its inhabited history, reaching St. Kilda required a voyage of several days across the open ocean. The threat of violent storms — especially common between the months of September and March — made the journey daunting at the best of times and unthinkable at the worst.

Even today, boat schedules are subject to the whims of the forecast, and cancellations by tour companies aren’t unusual. When my siblings and I visited in late August 2018, we had to preemptively shift our trip up by a day to avoid an impending spell of ominous weather arriving later that week.

On Hirta, looking southeast toward the hill known as Oiseval.
Fellow visitors seated near the cliffs.
The remains of a Beaufighter aircraft that crashed on Hirta near the summit of Conachair in June 1943. Stac an Armin, Stac Lee and Boreray are seen in the distance, about four miles from the edge of Hirta.

And yet it was St. Kilda’s architectural remnants that quietly hinted at the most dramatic elements of its history.

The village on Hirta, finally abandoned in 1930. A handful of the houses have since been restored.

With a population that peaked at around 180 in the late 17th century, St. Kilda has never made for a convenient home. Its inhabitants raised sheep and a few cattle and were often able to grow simple crops like barley and potatoes. But the mainstay of their diet came from seafowl: the birds’ eggs, along with the birds themselves, which were consumed both fresh and cured. (Fishing was often impractical because of the treachery of the surrounding waters; islanders also expressed a distinct preference for gannet, fulmar and puffin over fish.)

Villagers caught the birds and collected their eggs — using long poles and their bare hands — by lowering themselves on ropes from atop the islands’ cliffs, or by climbing up the rock faces from the water below.

Gazing up at the archipelago’s sea stacks from a boat lurching in the frigid ocean, I tried to envision the circumstances under which such extremes would be necessary simply to enjoy a monotonous meal. It tested the limits of my imagination.

More than 1,300 cleitean have been identified on St. Kilda, a vast majority of which are on Hirta. Their roofs were topped with turf, and wind passing through the structures facilitated the preservation of stored goods.
A partially collapsed storage structure. Many others have been repaired.
Historically, St. Kildans clung to the cliffs of the islands and sea stacks while hunting for birds and their eggs.

Life on St. Kilda was an agonizing experiment in precarity. Stormy weather spoiled crops, threatened food stores, prevented fowling and delayed necessary work. Landing a boat at Hirta’s Village Bay, the site of the archipelago’s longstanding settlement, could be difficult even in ideal weather. Diseases, including smallpox, cholera, leprosy and influenza, spread quickly and with devastating effect. For decades, St. Kildans sometimes launched their mail blindly into the sea in small waterproof containers; the hope was that their “mailboats,” as they were called, might by chance reach a populated place or be picked up and sent along by a passing ship.

The islanders’ extreme isolation also bred a particular kind of cultural disconnection. In his 1965 book “The Life and Death of St. Kilda,” the author Tom Steel describes a scene in which a St. Kildan washed ashore on the nearby Flannan Isles:

Soay sheep, an ancient and exceptionally hardy breed, dot the landscape on Hirta. Some evidence suggests that the sheep were first brought to the adjacent island of Soay at least 4,000 years ago. (The term “Soay” likely derives from a Norse term for “sheep island.”)

And yet St. Kildans were often described in contemporary accounts as uniquely cheerful. Crime was virtually nonexistent. Supplies and donations brought in from the outside world — along with much of the food gathered on the islands — were divided equitably among the islanders. Items such as boats and ropes, which the islanders depended on, were owned and maintained communally.

When the Scottish writer Martin Martin visited the archipelago in 1697, he noted the people’s joyous character. “The inhabitants of St. Kilda are much happier than the generality of mankind,” he wrote, “as being almost the only people in the world who feel the sweetness of true liberty.”

The sheer imposing cliffs of Stac Lee, one of the sites where islanders hunted birds.
On Hirta, precipitous cliffs abut grassy slopes.

In the end, though, life on St. Kilda proved untenable. The market for the islanders’ exports — feathers, tweed, sheep, seabird oil — gradually waned. Infant mortality rates were astonishingly high. Failing to keep pace with the comforts and technologies of the mainland, the islands became increasingly anachronistic, and the people increasingly isolated.

A particularly harsh winter in 1929 and 1930 sealed the St. Kildans’ fate. Fearing starvation, they petitioned the government to be evacuated.

Even that, however, wasn’t enough to break the spell for Alexander Ferguson, one of the evacuees, who, years later, describing St. Kilda in a letter, wrote that “there is no paradise on earth like it.”

“To me it was peace living in St. Kilda,” Malcolm Macdonald, another longtime resident, once said. “And to me it was happiness, dear happiness.”

Our group enjoyed a snack and a hot drink before departing for Skye. The two men in hats — Harvey, on the left, and Willie, on the right — were our guides. (The gun was installed at the end of World War I following an attack by a German submarine.)
An inflatable dinghy ferried passengers to and from our group’s small oceangoing boat.
A pod of dolphins in the waters surrounding the Outer Hebrides.

Four hours after arriving, having wandered over Hirta’s rolling terrain and strolled quietly along its hollow shell of a village, we lined up along the island’s jetty and boarded a dinghy to return to our boat. Our eastward trip, returning to Skye, was smoother, quieter, calmer. For a long stretch, a pod of dolphins swam alongside us, as if escorting us back through the water.

When we finally reached Stein, I felt a tinge of loss. I’d taken my first step, as I’ve come to see it, toward a partial understanding of what compelled several of the 36 islanders, who left in 1930, to return to and temporarily live on Hirta in the summer of 1931: a mounting certainty that the pleasure of wandering free among the islands, surrounded by the boundless ocean, was worth the trouble of getting — and being — there.

Stephen Hiltner is an editor on The New York Times’s Travel desk, where he edits and contributes to the weekly World Through a Lens column. You can follow his work on Instagram and Twitter.