Anti-Nobel sentiment has spawned alternative awards over the years.

Drake, in Search of an Enemy Besides Himself

Fake Parties and Cloned Candidates: How the Kremlin ‘Manages’ Democracy

A Yearlong Cry for Help, Then Death After an Assault

Sudanese protesters blocking a road in the capital, Khartoum, to denounce detentions by the military.Credit…Agence France-Presse — Getty … 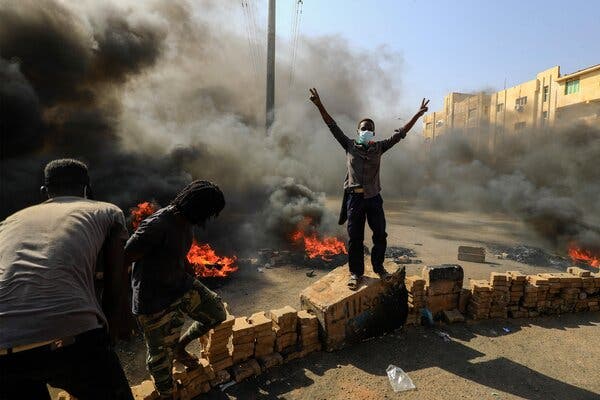 Sudanese protesters blocking a road in the capital, Khartoum, to denounce detentions by the military.Credit…Agence France-Presse — Getty Images

A coup in Sudan

Sudan’s top generals seized power yesterday, arresting the prime minister and other civilian leaders, imposing a state of emergency and opening fire on protesters. The coup appeared to deal a sweeping blow to hopes for a democratic transition in one of Africa’s largest countries.

Sudan’s military and civilian leaders have shared power for over two years in a tense, uneasy arrangement. But the military’s actions signified an end to that deal. “This is a new Sudan,” Lt. Gen. Abdel Fattah al-Burhan, the military chief, said. “We call on everybody to come together to develop and build the country.”

As news spread, protesters flooded into the streets of the capital, Khartoum, and soldiers opened fire, killing seven people and wounding at least 140 others, an official told Reuters. The internet was down in most of the nation, reinforcing fears that the country was reverting to the old Sudan, as it had been under its longtime dictator, Omar Hassan al-Bashir.

Response: The White House condemned the coup and suspended $700 million in emergency economic aid to Sudan, intended to support the democratic transition — a vital lifeline in a country laboring under economic crisis.

Next steps: The arrests happened weeks before al-Burhan, who leads the Sovereignty Council overseeing the democratic transition, was scheduled to surrender that position to a civilian. Instead, he dissolved the council and effectively declared himself the country’s leader. He did, however, vow to press ahead with elections in July 2023.

The actions of Frances Haugen, a former Facebook product manager turned whistle-blower, have created a backlash and a public relations crisis for the social media giant.

Yesterday, Haugen called for stiffer oversight of Facebook in Europe. Speaking to British lawmakers, she painted a portrait of a company vividly aware of its harmful effects on society but unwilling to act and risk jeopardizing profits and growth. “Until the incentives change, Facebook will not change,” she said.

The revelations have generated increased political support for new regulation, including some calls for Mark Zuckerberg to step aside as Facebook’s chief executive. The growing rancor could lead to new government investigations and force the company to disclose more details about how its software works.

Details: Haugen has shared scores of internal research papers, slide decks, discussion threads, presentations and memos with lawmakers, regulators and journalists. The information provides an unvarnished view of how some within the company tried to raise alarms about its harmful effects, but often struggled to get Facebook leaders to act.

Earnings: Facebook said yesterday that its profits in the latest quarter, which ended in September, had risen 17 percent to $9.2 billion, reflecting the company’s financial strength. Zuckerberg denounced the news coverage and criticism stemming from the leaks.

Travelers under 18 who are unvaccinated against Covid-19 and foreigners arriving from countries with low vaccination rates who can show a “compelling reason” for their travel are among those exempted from forthcoming requirements to enter the U.S., Biden administration officials said.

The U.S. will reopen to fully vaccinated international travelers on Nov. 8. Proof of vaccination will be required, as well as a recent negative coronavirus test. The regulations will seal off the U.S. from most foreigners who have not yet received a vaccine cleared by the W.H.O. or U.S. federal regulators.

Leaders in the tourism industry have praised the new rules, which will signal a new chapter in the U.S. recovery from the pandemic. The restrictions imposed in the early days of the health crisis have barred most foreigners from traveling to the U.S. for nearly 18 months.

A 100-year-old priest has a new assignment: The Rev. Luis Urriza, who founded the thriving Cristo Rey parish in Beaumont, Texas, nearly 70 years ago, has been called back to Spain so that a younger pastor can take over at Cristo Rey.

“God does things you don’t understand,” he said. “Maybe they need me over there.”

A man pushing a stroller in front of advertising for new housing being built in the Nof Kineret neighborhood of Tiberias, Israel.Credit…Laetitia Vancon for The New York Times

A journey into a divided Israel

The Times journalists Patrick Kingsley and Laetitia Vancon drove the length of Israel to discover what it means to be Israeli today. Over a 10-day journey, they met a kaleidoscope of people searching for belonging but far apart on how to find it. This is a lightly edited excerpt.

Journeying from Israel’s far north to its southern tip, we found a country still wrestling with contradictions left unresolved at its birth, and with the consequences of its occupation of the West Bank and Gaza in 1967. We found a people facing complex questions about what it means to be Israeli, or a Palestinian citizen of Israel. And we found a battle of narratives — waged not only between Jews and Arabs, but also among Jews themselves.

Israel’s founders hoped to create a melting pot, a society that blended diverse communities into a single Jewish state. But we encountered an Israel that at times felt more like an unsolvable jigsaw puzzle — a collection of incompatible factions, each with its own priorities, grievances and history.

Underlying tensions and inequities remain — the unending occupation, the blockade of Gaza, and the social divisions that have split Israel since its founding: between Jews from Europe and the Middle East, between the secular and the devout, between the Jewish majority and the Arab minority.

This vivid vegetarian pasta sauce is made from little more than blanched kale, olive oil and grated cheese.

As the weather grows cooler, cold and hot sleepers may struggle to share a bed. Here’s how to make it work.

Our photographer takes you inside Wat Bang Phra, a Thai temple renowned as a center for a style of tattoo art believed by some to convey protective powers.

That’s it for today’s briefing. Until tomorrow. — Natasha

The latest episode of “The Daily” is about Evergrande and threats to China’s economy.

Indigenous people face a unique risk that is not fully understood, a W.H.O. official said.

A Million Afghan Children Could Die in ‘Most Perilous Hour,’ U.N. Warns