Welcome to His World. And Hers.

BMW Has Fallen Behind in the Electric Vehicle Race. Can It Catch Up?

Nia DaCosta on ‘Candyman’ and the Power of Terrifying Legends

I was dangling from a thin nylon rope, some 250 feet from the bottom of an icy shaft. Looking up, I noted the spindrift — blinding snow whipped …

I was dangling from a thin nylon rope, some 250 feet from the bottom of an icy shaft. Looking up, I noted the spindrift — blinding snow whipped into a frenzy by howling winds — that was sandblasting the entrance, some 20 feet above me. I was glad to be out of the weather, hanging in near silence.

As my eyes adjusted to the lower light, I found myself staring down into a chasm that was far bigger than anything I thought we might find beneath the surface of the Greenland ice sheet.

All I could think was: “This shouldn’t be here.”

It was 2018, and I was on an expedition with Will Gadd, a Canadian adventure athlete, to explore moulins, or giant vertical caves, in the Greenland ice sheet. Will was already at the bottom of the shaft. From my vantage point, he looked like an insect with a headlamp. 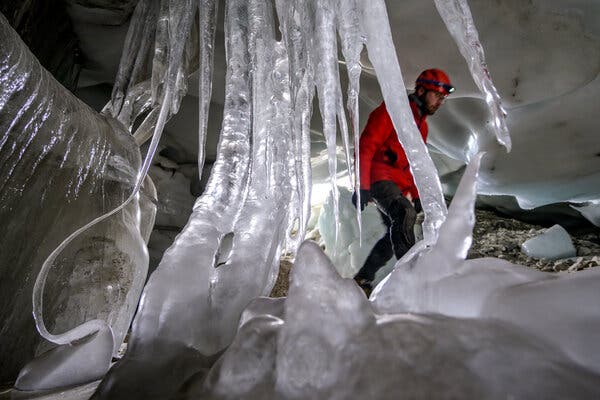 Ryan Strickland, a Ph.D. student at the University of Arkansas, skirts an ice formation inside Nepal’s Ngozumpa Glacier. Ice in glacier caves oozes like silly putty and deforms under its own weight. As gravity tugged on the roof of this cave, the slowly sagging ceiling pressed these icicles into natural works of art.

Dr. Matthew Covington, top, a glacier researcher, ascends out of a moulin in the Greenland ice sheet while David Ochel, below, removes their rigging. Dr. Covington is part of a small group of glacier researchers who are using advanced vertical caving techniques to explore and study Greenland’s glacier caves.

At first glance, Will and I were an odd pairing for an expedition. Will is one of the world’s top professional ice climbers. He’s sponsored by Red Bull. He’s won the X Games, ESPN’s extreme sports competition, and hung out with Jimmy Chin, a professional mountaineer and filmmaker.

I, on the other hand, am a geology professor at the University of South Florida. I teach undergraduates about the physics of groundwater. I’ve hung out with … scientists. We don’t exactly share the same social circles.

Like nearly half of the glaciers in Nepal’s Everest region, the Ngozumpa Glacier is covered in rocky debris shed by adjacent mountains. Debris should insulate underlying ice from melting, but glaciologists have found that debris-covered glaciers are paradoxically melting at the same rate as clean ice glaciers. Glaciologists think cycles of lake formation, drainage of warm water through glacier caves, and cave collapse — which creates new depressions for new lakes — are rotting the glaciers from the inside out.

I ended up in Greenland with Will because he wanted to make an expedition film that focused attention on climate change. Will is in his mid-50s. Over his long career, he has seen climate change erase ice climbs and shrink glaciers. He pitched the film to Red Bull. They liked it. And so the Beneath the Ice expedition was born.

Will roped me in because I wrote my Ph.D. dissertation about glacier caves and had been studying them for more than 15 years. I was supposed to be the science expert, but I sure didn’t feel like one staring into that inexplicably large hole.

I began my accidental journey to glacier-cave expert in 2004 as an undergraduate geology student at Eastern Kentucky University. A mutual friend invited me on a rock climbing trip with Dr. Doug Benn, a glaciologist from the University of St. Andrews, in Scotland. While I was skipping classes to explore and map caves near campus, Doug was studying how the warming climate was melting Mount Everest’s glaciers into networks of lakes. Some of these lakes drained catastrophically through caves in the ice, occasionally with devastating consequences for villages, dams and hydroelectric facilities below. Glaciologists didn’t understand how these caves formed and therefore didn’t understand what controlled lake drainage.

Between climbs, and later over beers, Doug and I became convinced that we could understand how glacier caves in the Everest region were forming — if only we could explore and map them. While I’d never seen a glacier, and Doug had only briefly visited a few caves, we figured that combining Doug’s glaciology and mountaineering experience with my background in cave exploration and mapping might help us figure out how to explore some of the world’s highest caves, and probably even survive the expedition.

Dr. Matt Covington inside the Ngozumpa Glacier. Crawling at altitudes between 15,000 and 18,000 feet above sea level is one of the most difficult parts of cave exploration in the Everest region. Catching one’s breath in tight squeezes is no easy feat.
Annelie Bergstrom, left, and Dr. Doug Benn climb out of a cave entrance on Bakaninbreen, a glacier in central Svalbard with a history of surging. Glaciers are said to surge when they suddenly begin sliding at speeds of more than 33 feet per day. The causes of glacier surges remain poorly understood, but many glaciologists think cycles of water storage and release beneath glaciers play an important role. Dr. Benn and his team have been crawling around caves formed by water flow under glaciers to gain new insight into controls on water flow beneath surging glaciers.

On our first expedition in November 2005, we spent around seven weeks exploring and mapping glacier caves at elevations above 16,400 feet in the Everest region, including caves that were a short hike from Mount Everest base camp. Gasping for breath in the thin air, we survived rock slides, ice falls and collapsing cave floors. And we slowly learned the glacier caves’ secrets.

Glacier caves in the Everest region, we discovered, were forming along bands of porous debris in the ice. Water from lakes on the glacier surface would flow through debris bands and melt the ice around them to form a cave. The caves could then rapidly enlarge as the rate of melting increased, allowing entire lakes to drain through them.

Having unraveled my first scientific mystery, I was hooked. I completed my undergraduate degree in 2006 and began working with Doug and a growing list of adventurous collaborators to explore and map dozens of other glacier caves in Alaska, Nepal and Svalbard, Norway, first as a graduate student, later as a post doctoral fellow and finally as a professor. Along the way, I learned how to photograph the frozen darkness so that I could share our findings with scientists who lacked the technical skill sets to venture into glacier caves.

Climate change is poking holes in the roof of the world. Rising temperatures are forming caves inside glaciers in the Everest region of Nepal that are literally rotting them from the inside out. Here, Mahesh Magar, a Nepali guide, exits a cave on the Khumbu Glacier, just a short walk from Everest base camp. With elevations of more than 17,500 feet, these are some of the highest mapped caves in the world. Up to half of all glacier ice may disappear from the Himalaya by 2100.

The discoveries we made scampering beneath the world’s glaciers over the next decade helped us document the role that glacier caves play in mediating how glaciers respond to climate change. In Nepal, where thick blankets of debris on glacier surfaces should insulate glaciers from melting, we found glacier caves were melting ice below the debris. Caves were turning Everest’s glaciers into Swiss cheese and rotting them from the inside out.

In other parts of the world, including in Alaska and Svalbard, glacier caves followed fractures in the ice and funneled rivers of meltwater to glacier beds. The surge of summer meltwater lubricates the contact between the ice and underlying rocks and causes glaciers to slide faster than they would if meltwater wasn’t present.

Jessica Mejia (at left) and Charlie Breithaupt, two Ph.D. students at the University of South Florida, map rivers on the Greenland ice sheet.
Surveying the perimeter of a meltwater lake on the southwestern Greenland ice sheet. Over the last two decades, warming arctic temperatures have increased the area of the ice sheet covered by lakes by 27 percent.

While I’d explored glacier caves around the world before working with Will, there was one place I hadn’t gotten to explore: the inside of the Greenland ice sheet.

The Greenland ice sheet extends more than 650,000 square miles — roughly the size of Alaska. If it melted completely, it could raise the sea level by 23 feet.

During the summer, moulins are filled with raging waterfalls. Fall’s cooler temperatures shut off surface melting and allow a brief window for glacier cave exploration before moulins become plugged with winter’s drifting snow. Here, Will Gadd finishes climbing out of a moulin during the Beneath the Ice expedition to explore and study Greenland’s glacier caves.

Each summer, rising temperatures transform the frozen surface of the edge of the Greenland ice sheet into a network of rivers and lakes. All of the rivers, and many lakes, disappear into moulins and continue flowing toward the ocean along the interface of the ice sheet and the rocky bed beneath it. As the flow of meltwater into that interface increases, friction between the ice and bed is reduced, and the ice sheet speeds up, sending ice into the ocean faster than in winter.

Some glaciologists are worried that as climate warming triggers more melting, and new caves form in areas of the ice sheet that didn’t previously melt, increased lubrication might cause the ice sheet to dump ice into the ocean and raise sea levels faster than expected.

Mere steps from Everest base camp, a pair of researchers drop into a glacier cave on Nepal’s Khumbu Glacier, while Everest’s summit catches the last rays of sunlight. Rising temperatures and skyrocketing melt rates lowered the ice surface at the camp by a staggering 100 feet between 1984 and 2015, a decline of more than three feet per year.

With funding from the National Science Foundation, I was able to establish remote camps to study how the water flow into caves was affecting the motion of the ice sheet during summer. But I really wanted to return in the fall, when cold temperatures shut off the meltwater supply to moulins and make them safe to explore. So when Will Gadd sent me an email and asked if I wanted to “do something cool” in Greenland’s glacier caves, I was ready to go. I wanted to see if the ideas I’d developed about glacier caves from other glaciers worked on Greenland.

Having worked in so many different glacier caves, I thought I had them figured out. But as I dangled in the middle of that massive, icy shaft in the Greenland ice sheet, perplexed by its sheer size, I realized glacier caves still held surprises for me, and that there were more mysteries left to solve.

Will Gadd explores a short horizontal tunnel nearly 300 feet below the surface of the Greenland ice sheet.

Jason Gulley is an associate professor of geology at the University of South Florida and an environment, science and expedition photographer based in Tampa, Fla. You can follow his work on Instagram.

The Week in Business: A Milestone in Space Tourism

From TV to the French Presidency? A Right-Wing Star Is Inspired by Trump
ZİYARETÇİ YORUMLARI