Onstage, the Pen Is Usually Duller Than the Sword

Searching for Bird Life in a Former ‘Ocean of Forest’

Google Could Be Violating Labor Laws With Pay for Temp Workers

Musicals Return to Broadway With ‘Waitress’ and ‘Hadestown’

Pink Siifu, a Shape-Shifting Musician With One Demand: Don’t Box Me In
Anasayfa » Güncel » Cedric the Entertainer Wants to Make the Emmys More Accessible

Cedric the Entertainer Wants to Make the Emmys More Accessible

Year after year, the Emmy Awards have sought a master of ceremonies who can reverse its declining trends in viewership and bring audiences back …

Year after year, the Emmy Awards have sought a master of ceremonies who can reverse its declining trends in viewership and bring audiences back to this annual broadcast honoring the television industry. Maybe what the show needs is an all-around entertainer.

So for this Sunday, the Emmys have enlisted Cedric the Entertainer, the veteran stand-up and star of the CBS comedy “The Neighborhood,” to host the show, bucking a recent tradition of drawing from the talent pool of late-night TV.

Cedric, 57, knows he has his work cut out for him: It’s not easy for people to get invested in the Emmys while the pandemic continues and when there is little overlap between the fan bases for nominated shows like “Ted Lasso,” “The Crown” and “The Handmaid’s Tale.”

But he is hoping that this year’s Emmys — which, unlike last year’s largely virtual event, will have an in-person ceremony at the Event Deck at L.A. Live, in Los Angeles — will encourage viewers to come back by fostering a spirit of inclusivity.

As Cedric said in a video interview last month, “I want to bring a familiarity that comes with my brand of stand-up. I’m somebody you know. I’m your cousin or your uncle, and we’re here to celebrate each other.”

“I’m there to do every job that a host is supposed to do,” he continued. “I may go and kick it with people. You may see me do a food-pass tray — have some crudités, my friend. Please, go in my closet, wear one of my jackets, you’re fine.”

Cedric spoke further about his plans for the Emmy Awards, the divide that separates cable and streaming comedies from network shows like “The Neighborhood” and his precarious return to stand-up for the first time in 18 months. These are edited excerpts from that conversation. 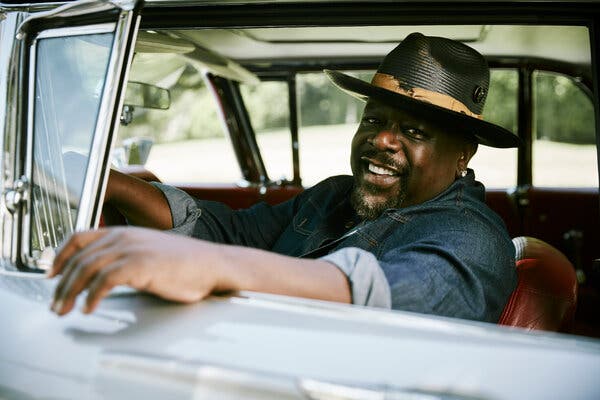 “I was telling the writers, let’s remove the velvet rope of it all,” Cedric said. Credit…G L Askew II for The New York Times

How were you approached about hosting the Emmys?

It was really one of those serendipitous things where it just showed up. I had no idea. I was on a Zoom call for something else, pitching a show or something, and the producers saw me and were like, “Oh, this dude will do a good job.” Afterward, the producers called me, like, “Oh, yeah, by the way, you think you want to host the Emmys?” I’m like: “Uh, hell yeah. Let’s do it.”

You didn’t have any hesitation about doing it?

My biggest thing was, was it going to be virtual again? A virtual situation doesn’t necessarily appeal to me as a live performer and a stand-up. I don’t know if that would have been as sexy. But it was planned to be back in a venue with people giving out awards, having a good time. It will still be socially distanced and responsible. I’m the host, and I’m onstage by myself, so I won’t see none of you people. [Laughs.]

What kind of sensibility are you hoping to bring to this year’s show?

There was a lot of great television on in the past year and, due to the pandemic, many of us watched way more television than normal. We want to blend these things together — shows that you heard of but didn’t really watch, mixed with some shows that you know. Though we’re dressed up and wearing tuxedos, I don’t want that Oscars feel — that [haughty laughter] ha, ha, ha, ha.

Do you think that kind of elitism has been turning viewers off from awards shows in recent years?

I was telling the writers, let’s remove the velvet rope of it all — the feeling that, when you look at these shows, this is for them. Me being on a network sitcom … streamers and cable are really what the Emmys are about, the more avant-garde things. The smart television. It started to have this feeling like people aren’t really invited in the room. We all do a job here. Some people have more serious dramatic shows that are fun and interesting to watch. And some people have veg-out, “sit down and relax” television. Let’s take the judgment out. That’s what I want to do.

Is it hard for viewers to get excited about celebrating famous people in the midst of a pandemic?

People have very specific feelings about this and rightfully so. I definitely want the stars to come out and have fun. And there is a desire for that — people just want to experience a night out, done as safely as possible. But I also understand that on any given day, and depending on what our governor is feeling here, these things could change. I’m remaining hopeful at this moment — trying to have that spirit of, let’s get back to some normalcy.

Would it help to introduce some new award categories?

We’ve talked about this. Just the one line in the series that you love so much. The rest of the show was, eh, OK. But the way this person said that thing? Or when someone cried the hardest. There’s just not enough recognition for the specifics.

You’ve spent the pandemic catching up on series that you missed. Is there another show, besides your own, that you wish you could appear on?

Oh man, would I love to be on “The Crown.”: “Archie, I’m your real dad …” You talk about controversy! Oh my God. [Laughs.] But of course I love “Succession.” Man, it would be great to show up as some cool lawyer or money mogul. Just being a billionaire and talking about it like it’s an everyday thing — to live it, for a little a bit. I just want to jump on a helicopter and go places.

“The Neighborhood,” which stars Cedric and Max Greenfield, is about to begin its fourth season.Credit…Bill Inoshita/CBS

At a time when network sitcoms are in short supply, “The Neighborhood” is about to start its fourth season on Monday. What do you think has kept it on the air this long?

I think the idea of people living together and learning how to get along is attractive. We took the conflict around the gentrification of neighborhoods and added a humanity to that. It’s not about us and them. It’s about, how can we get along? We do talk about serious issues but without getting preachy; we’re never trying to sway you one way or the other. And we’ll push a little bit, in a CBS kind of way.

You feel that the Emmys favor cable and streaming comedies over their network counterparts?

I do think that there should be space for all types of television. To me, our show is in the tradition of the TV that we grew up on, where we had four or five channels and a show like ours would have been considered [exaggerated voice] very important at the time. In a world of cable and streamers, with the ability to push language or whatever a writer wants to see, we have a degree of handcuffs. It can appear that you’re softer, that you’re not as edgy. But some people don’t necessarily care for that in their home. I don’t need everything to be edgy, and I don’t need to see everybody with their shirt off. I get it. People have sex, got it.

Has the pandemic made day-to-day production of your show more difficult?

To a degree. You don’t have that contact with people that you used to — especially with the writers, where you’re flowing and things happen in the moment. Before the pandemic, the writers would come down to the floor and I could talk to them: “Yo, guys, I want this joke to be stronger,” or, “I feel like that’s kind of typical, let’s go at it a different way.” Now that note is given virtually, and it’s given to one person. That’s difficult. Of course we have to rehearse with shields and masks on until we get ready to do a scene.

And testing. There’s so much testing. The amount of cotton swabs that’s been up in my nose — oh, the calluses on the inside. Mike Tyson could hit me in my nose right now, it wouldn’t bleed.

You recently started performing some stand-up shows again after a pandemic-imposed hiatus of about 18 months. What was that like?

Going onstage and not having my rhythm, the audience had to be very patient with me. I had like two brain freezes — I was up there, totally frozen — and the crowd started yelling out jokes for me to do. I said, “Thank you, guys.” I think they were just happy to be out of the house themselves. They were like: “Don’t leave. Just talk to us. Whatever’s on your mind. It doesn’t even have to be funny. We just don’t want to go home yet.”

Did you immediately check TMZ to see if they had posted any clips from these shows?

It was scary. I give great praise to anybody that does their job in a real way — it’s the consistency, it’s the hustle, it’s the care. If you stop it and think you can go flip a switch, you’ll be quite surprised.

For your supporting role in the film “First Reformed,” you took the rare step of being billed under your given name, Cedric Kyles. How do you decide when to do that or not?

The film was very sincere, and we didn’t want anybody coming in, knowing me as Cedric the Entertainer, and having expectations of jokes. I did another film called “Son of the South,” where I played Ralph Abernathy. In this one, they’d rather I used Cedric the Entertainer, because the movie was small and they were trying to get as much of a pop as possible. We went back and forth over how I should be billed in that one, and that became a little bit more of a marketing choice. I always say Cedric Kyles is my kids’ father. I’m not sure how much I’m willing to expose myself that way. We shall see.

Is there another historical figure you would want to play if you had the chance?

I’ve always wanted to play Marcus Garvey. He’s an interesting character, especially in the 1920s, that had the ability to communicate on multiple continents without internet, without Wi-Fi. How do you that? He was one of these leaders with an entrepreneurial spirit. I don’t know of anybody else who’s tried to have a shipping company. We don’t have one Black dude that’s tried to build boats? That was it? That’s crazy.

From 4% to 45%: Biden Offers Ambitious Blueprint for Solar Energy