Britain Prepared for a Jobs Crisis, Just Not the One It Got

Fashion Returns to the Museum

Facing Severe Droughts, Developers Seek to Reuse the Water They Have

When Salesforce Tower in San Francisco fully reopens this year after 16 months of pandemic-induced closure, one of its more unusual features will …

When Salesforce Tower in San Francisco fully reopens this year after 16 months of pandemic-induced closure, one of its more unusual features will be found in the basement.

A series of pipes and cast-in-concrete holding tanks, arrayed on two levels in the parking garage like some hidden microbrewery, will take the dirty water generated by the structure’s daily operations through a six-step filtration process and return it as clean, nonpotable water for use in toilets and drip irrigation.

Taking up the space of 16 cars, the black-water system, so called because it treats all wastewater, including from toilets and showers, will filter an estimated 30,000 gallons per workday, or 7.8 million a year. The system, the most comprehensive of its kind in a high-rise tower in the nation, is designed for people to visit — each step of the process is labeled, said Amanda von Almen, head of sustainable built environment at Salesforce.

It’s also intended to help the company meet its goal of slashing corporate water use in half. “San Francisco’s our home, and there’s a drought here,” Ms. von Almen said. “We have to do something about it.” 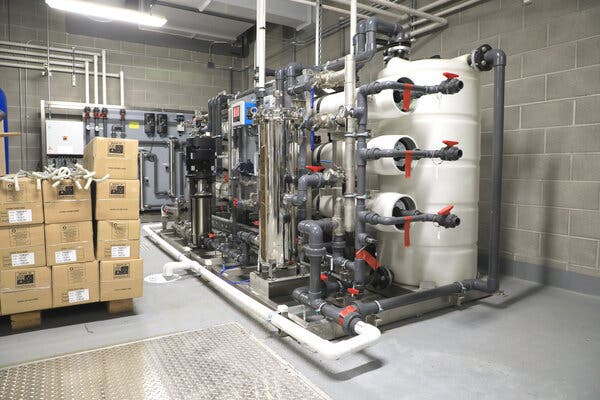 The water-recycling effort is gaining traction as a severe drought punishes industries in states like California, Montana, New Mexico and Utah.

The concept isn’t new, but it’s increasingly seen as a promising sustainability push, especially as more cities and states enact measures to limit water use, and as a smart hedge against rising water costs and future shortages.

Park Habitat, an office tower that will include a black-water recycling system when it is built in downtown San Jose, Calif., is made for a world where droughts are an everyday reality, said Andrew Jacobson, the head of development for Westbank, the project’s developer.

Water-conservation advocates say such technology is where solar and renewable power were a decade ago: technologically feasible, with pioneering projects starting to bend the cost curve and push the concept toward wider accessibility.

“Ten or 15 years ago, a green building was a ‘nice to have,’ whereas now it’s driven by regulations and the market,” said Aaron Tartakovsky, a co-founder and the chief executive of Epic Cleantec, a wastewater tech start-up in San Francisco. “It’s undeniable that the drought has accelerated conversations many were already having.”

Industrial water use has long been a corporate focus. Reducing the water bill for manufacturing, or for cooling data centers, has great value in terms of resilience, sustainability and reputation. But increasingly, commercial real estate is another way to cut water use, decrease resource dependency and promote green bona fides.

The system at Salesforce Tower will filter an estimated 40,000 gallons of water a day. Credit…Jim Wilson/The New York Times

Commercial real estate is “where the balance of the pendulum” is for water conservation, said Paul O’Callaghan, the founder of BlueTech Research and a co-producer of the 2020 documentary “Brave Blue World: Racing to Solve Our Water Crisis.” Roughly a third of the water use in San Francisco, for instance, takes place in commercial buildings.

Much of the technology behind water reuse is long established and relatively easy to install and operate, but it requires that local regulations catch up.

“A few cities, like San Francisco, Los Angeles, New York City and Boston, are creating the regulatory frameworks to expand this technology,” Mr. Tartakovsky said. “But now, states like Hawaii and Washington are looking to create systems that model what San Francisco did.”

Salesforce installed the black-water system primarily to demonstrate leadership on the issue, said Ms. von Almen, who declined to specify costs or savings figures. But there is long-term payback, especially if the cost of water rises over time.

The wastewater holding tanks are encased in the concrete structure in the Salesforce basement parking lot.Credit…Jim Wilson/The New York Times

Increasingly, developers see value in black-water systems, especially at scale, to provide water for irrigation and cooling towers. Even the cost to retrofit a building, long considered infeasible because of the need to add so many pipes for recycled water, is now more viable, Mr. Tartakovsky said.

Mission Rock, a 28-acre, $2.5 billion multiuse waterfront project led by the San Francisco Giants and developed by Tishman Speyer, will use a black-water system. Every building on the site, which broke ground this year, will tie into it over time. A new nonprofit utility, Mission Rock Utilities, will build and manage both it and a central thermal energy system.

Water reuse isn’t being embraced just in drought-stricken Western states. On the Brooklyn waterfront, the 11-acre, roughly $3 billion Domino Sugar Refinery redevelopment will feature a more than $10 million black-water system designed not only to cut water use but to reduce pressure on storm-water systems.

Resilience and sustainability are mandatory design criteria to protect the long-term value of the developer’s assets, which benefit from a clean waterway, said Bonnie Campbell, principal at Two Trees Management, the firm leading the project.

And residents are acutely aware of water quality. “It’s pretty obvious when there’s a storm and the East River smells like poop,” Ms. Campbell said.

Domino Park in Brooklyn. The redevelopment of the Domino Sugar Refinery will feature a $15 million blackwater reuse system designed to reduce pressure on storm-water systems.Credit…John Taggart for The New York Times

The black-water system on the Domino project, which can handle 400,000 gallons of wastewater a day, is big enough to take all five buildings in the development off the city’s combined sewer system and reroute any excess clean water into the river.

“It’s no secret that the city’s infrastructure is overburdened,” Ms. Campbell said. “New development increases reliance on that system, which is scary, so decentralized systems like ours are a hedge against that.”

It’s a good investment, too. The projected 10- to 15-year payback is helped by an incentive program, created by the city’s Department of Environmental Protection, that provides 25 percent discounts on water bills.

The blackwater system at the Domino redevelopment will be able to handle 400,000 gallons of wastewater a day.Credit…John Taggart for The New York Times

For the city, water reuse efforts offer many benefits: They save energy and reduce climate-change emissions and the flow of water into the sewer system during heavy rain, said Pinar Balci, an assistant commissioner at the department.

“We’re water rich, and don’t have land to build infrastructure under,” she said. “Incentivizing is providing the sweet spots for private developers to take advantage.”

Other cities have been looking at changing their infrastructure requirements to encourage or even mandate more water reuse in commercial structures.

San Francisco has been at the forefront of water conservation. A 2012 ordinance established standards for reuse, and it was updated in 2015 to require new buildings larger than 250,000 square feet to collect, treat and use gray water, a term for wastewater minus toilet waste.

Rafael Mandelman, a member of the city’s Board of Supervisors, has proposed doubling the amount of water that new buildings need to collect and reuse, and including buildings of 100,000 square feet or more.

An analysis in Austin, Texas, predicted that the number of water customers in the fast-growing state capital would quadruple in 100 years. To meet some of that demand, the city offers incentives for developers to install reuse systems, and it plans to eventually make them mandatory.

“It’s a paradigm shift, seeing building owners bring their own water to the table, so to speak,” said Katherine Jashinski, a supervising engineer for Austin focused on on-site water reuse programs. “Companies moving here from California are interested in sustainability and want to make sure there will be a secure water supply.”

Cutting-edge examples will include even more resource and energy savings. In San Francisco, a system that Epic Cleantec will install in a proposed 55-story mixed-use development called 10SVN will recycle not just black water, saving an estimated $12 million over the first decade, but also solids in the waste stream into organic soil. It will even recover and reuse the heat energy from wastewater.

The Strange Tale of the Freedom Phone, a Smartphone for Conservatives