Interview With Kathy Hochul: ‘I Feel a Heavy Weight of Responsibility’

R. Kelly Sexually Abused Aaliyah When She Was 13 or 14, Witness Says

How a Barber and Journaling Expert Spends His Sundays

The Chaos on Rikers Island
Anasayfa » Manşet » Threatened Birds Have a Defender on N.Y. Beaches: The Plover Patrol

Threatened Birds Have a Defender on N.Y. Beaches: The Plover Patrol

Piping plovers, dun-colored shorebirds that lay their eggs in tiny scrapes in the sand, are easy to miss as they dart over the beach. Chris …

Piping plovers, dun-colored shorebirds that lay their eggs in tiny scrapes in the sand, are easy to miss as they dart over the beach. Chris Allieri is harder to overlook.

This past spring, Mr. Allieri started the N.Y.C. Plover Project, an organization dedicated to protecting the threatened birds on beaches in the Rockaways in Queens. He has recruited more than 50 volunteers who have spent most of the spring and summer patrolling the beaches to defend plovers from dogs and oblivious beachgoers.

Some interactions can be uncomfortable, like when Mr. Allieri intercepted a young woman carrying a small dog from her boat to the shore of Breezy Point Tip on a sweltering Saturday. Not far away a handful of fledgling plovers wheeled over the waves while at least three chicks scampered over the sand.

Mr. Allieri explained that the dog was forbidden. The woman said she understood and returned to the boat. But then a man stomped from the boat through waist-high water, asking Mr. Allieri, “You work for the government?”

Mr. Allieri said he did not but would call law enforcement if the dog set foot on the beach. The man said he didn’t like being told what to do. Mr. Allieri called the Parks Police before the man walked back to his boat.

Arguments like that are atypical, Mr. Allieri said, but days at the beach have not exactly been relaxing since he started watching over plovers. 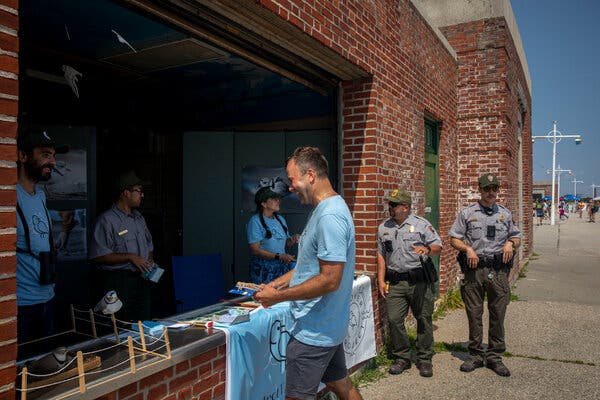 Chris Allier, center, founded the NYC Plover Project after first seeing a piping plover as a child on the Jersey Shore.Credit…Dave Sanders for The New York Times

Mr. Allieri, 47, lives in Brooklyn and owns a public relations company that specializes in clean energy and climate technologies. He saw his first plover as a child with his father, an avid birder, at the Jersey Shore. He said it was like seeing “a unicorn.”

Last year, Mr. Allieri was at Fort Tilden Beach at Gateway National Recreation Area in Queens when a plover appeared next to him on the beach. Then he saw another, and another.

He spent much of the first summer of the coronavirus pandemic photographing plovers and communicating with the National Park Service, which oversees Gateway.

This spring Mr. Allieri started the Plover Project to educate beachgoers about the birds and to call authorities if necessary to protect them.

Plovers have seen their coastal habitat destroyed by human development and erosion. At one point there were barely more than 720 breeding pairs of Atlantic piping plovers left.

The birds are federally protected under the Endangered Species and Migratory Birds Treaty Acts. According to the U.S. Fish and Wildlife Service, there were a total of 5,983 cases investigated in 2020 under both acts, of which investigations into plovers make up a fraction.

Plover chicks begin to run and feed on their own practically from birth, and they are mostly defenseless against predators like ghost crabs, gulls and raccoons, among many others. Human proximity can prevent the chicks from feeding, which can be a death sentence.

A ghost crab, a piping plover predator, on the beach at Breezy Point, Queens. Credit…Dave Sanders for The New York Times

Once grown, the diminutive birds become world travelers, annually migrating south from the sandy beaches along the Atlantic Coast, the Great Lakes and river systems on the Great Plains, the three places where most of them are born. Mr. Allieri said that one, banded in New Jersey and nicknamed Clark Kent, was seen in the Bahamas, a journey of more than 1,000 miles.

In the New York region, plovers tend to nest on the Jersey Shore, Long Island, and at Rockaway Beach, Fort Tilden and Breezy Point beach in Queens. They arrive in March and can stay until the end of August, through the hot months when humans also flock to the sea.

That timing is unfortunate, and some beachfront communities have resented the birds for decades because protecting them often means restricting beaches.

U.S. Park Police officers patrol federal beaches but say the volunteers looking out for piping plovers are helpful because officers can only cover a limited area. Credit…Dave Sanders for The New York Times

Whole stretches of beach can be cordoned off. Walking dogs, flying kites, lighting fireworks or off-roading to a secluded spot for fishing are banned. Anyone caught harming a plover can face stiff financial penalties and even jail time.

Protecting the birds can also mean capturing or killing animals that eat them, like foxes in New Jersey or feral cats on Long Island, actions that have angered residents. In the Hamptons, some homeowners turned against the birds, so much so that one outspoken critic published a recipe for spit-roasted plover in a local newspaper.

The village of West Hampton Dunes on Long Island was incensed over plover regulations, which required fencing about half its beaches, erecting protective structures around nests and hiring “plover monitors,” who patrol the sands and keep cars moving at a crawl on nearby roads, said the mayor, Gary Vegliante.

“We were quarantined from our beach,” Mr. Vegliante said.

But over the years residents have mostly come to accept the restrictions, Mr. Vegliante said. “The birds are cute, nobody wants to see them abandoned or lost,” he said.

Plovers, which have been federally protected since the mid-1980s, have seen their coastal habitat destroyed by human development and erosion.Credit…Dave Sanders for The New York Times

U.S. Park Police enforce the laws that protect plovers and other threatened species on the Queens beaches that Mr. Allieri watches. But there are only so many park rangers available. Mr. Allieri’s group is a big help monitoring miles of beach, said Tony Lordo, a lieutenant with the Park Police.

The Park Service partnered with Mr. Allieri and helped teach him and the volunteers about conflict de-escalation and the best way to approach people on the beach.

Many people, he said, are eager to learn about plovers, which are undeniably cute — their chicks look like a kindergartner’s art project, a pair of cotton balls glued to pipe cleaner legs.

Mr. Allieri has repurposed a booth on the boardwalk at the beach at Jacob Riis Park and printed plover stickers and temporary tattoos to give passers-by.

Samantha Philbert, 30, said she joined the Plover Project because she found the birds “adorable.”

An illustrator who lives in Brooklyn, she said getting to the beaches involves riding two buses for an hour and a half, and she usually stays for hours. She approaches people with a sculpture of a plover egg and photographs of different shorebirds and tries to teach, not scold.

Ms. Philbert said that as an introverted Black woman, she often thought about what happened in 2020 when a Black birder asked a white woman not to walk her dog off-leash in Central Park, only to have the woman call the police.

“It’s just kind of intimidating when you’re kind of like the only Black person, like in an area that’s predominantly white,” Ms. Philbert said.

But aside from rare encounters with visibly intoxicated people, she said, “everyone was really nice to me, all smiles everywhere.”

Plover numbers in the Rockaways have increased in recent years, with 46 reported in 2020. Mr. Allieri said he plans to continue his efforts as long as the birds keep coming back to the city.

“They’re New Yorkers, too,” Mr. Allieri said. “They’re living their lives, just as we are trying to live our lives.”

2 New York Judges Ordered Defendants to Get Vaccinated. Can They Do That?
ZİYARETÇİ YORUMLARI