They Put Everything Into Their Homes. Not One Was Spared in the Flood.

What’s Next for SoHo?

‘X’ Marks the Spot: Officials Map a Route Out of the Pandemic

R. Kelly on Trial in Brooklyn

[Want to get New York Today by email? Here’s the sign-up.] It’s Thursday. Weather: There’s a 50 percent chance of thunderstorms today, with a …

Weather: There’s a 50 percent chance of thunderstorms today, with a high in the mid-80s. Tonight will be mostly cloudy and in the low 70s. 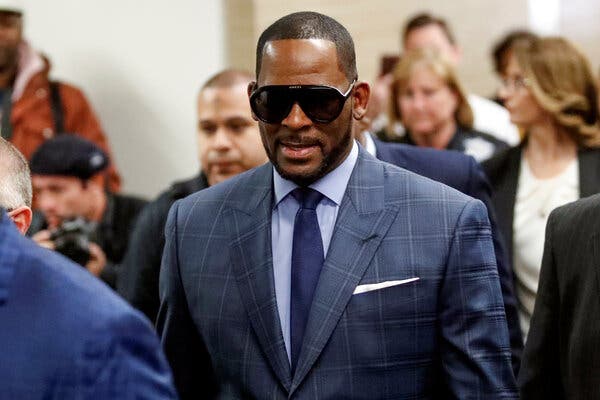 For decades, the R&B singer R. Kelly has been accused of sexually abusing girls and women. Yesterday, his long-awaited criminal trial began.

The singer, whose full name is Robert Sylvester Kelly, 54, is facing a slew of federal charges in New York, including racketeering and violations of the Mann Act, an interstate anti-prostitution law.

He has pleaded not guilty to all charges.

[Read more details about the first day of the trial and what to know about the case.]

In her opening statement, Maria Cruz Melendez, an assistant U.S. attorney, told the jury of seven men and five women that Mr. Kelly was a star whose public persona allowed him to use “his fame, his popularity and a network of people at his disposal to target, groom and exploit young girls, boys and women for his own sexual gratification.”

The trial centers on six women and girls, who prosecutors said suffered physical, sexual and psychological abuse at the hands of Mr. Kelly. Unlike his first criminal trial in 2008, in which he was acquitted of child pornography charges, several of the accusers are expected to testify.

Ms. Cruz Melendez detailed the brief 1994 marriage between Mr. Kelly, who was 27 at the time, and the singer Aaliyah, who was 15, which Ms. Cruz Melendez described as a last-ditch effort to avoid legal prosecution when he learned Aaliyah believed she might have been pregnant. (Aaliyah, whose full name was Aaliyah Dana Haughton, died in 2001.)

Mr. Kelly’s defense team plans to question the motives and credibility of his accusers. Their arguments include that his accusers had willingly traveled to see him and “knew what they were getting into,” and that some became spiteful after their relationships turned tense and sought “revenge.”

[With R. Kelly on trial, what has become of his music?]

Nicole Blank Becker, one of Mr. Kelly’s four lawyers, said accusers’ testimonies would be filled with “exaggerations.” She described them as once-enamored fans who each developed an “agenda” when faced with the prospect of media attention and financial gain.

“We believe their testimony will crumble,” Ms. Blank Becker told jurors. “There will be so many untruths told to you, ladies and gentlemen, that even the government won’t be able to untangle the mess of lies.”

If he is convicted, Mr. Kelly could spend between 10 years and the rest of his life in prison.

Man Charged in Hatchet Attack at a Manhattan Bank

Officers who are not vaccinated and don’t wear masks while working will be disciplined, the Police Department said.[New York Post]

Jumaane Williams, the New York City public advocate, met with Lt. Gov. Kathy Hochul, who is set to replace the outgoing governor, but said he was not seeking the lieutenant governor position. [New York Daily News]

And finally: A buyer for three beloved Y.M.C.A. summer camps

The Y.M.C.A. of Greater New York has found a buyer for three summer camps upstate, months after the sudden news of the camps’ sale incited outrage among generations of people who loved them.

The Talcott, McAlister and Greenkill camps cover more than 1,000 wooded acres in Huguenot, N.Y., about 60 miles northwest of New York City. Founded in 1918, they have long been a summertime refuge for low-income children, who paid on a sliding scale.

The Wend Collective, an impact investment fund started by James Walton bought the camps for $7 million. A representative for the collective said that they planned to operate the camps with the same mission in mind, but that there was not yet a firm date for reopening.

“It’s an organization that shares our core values, especially around empowering and serving youth and preserving nature,” Sharon Greenberger, the chief executive of the Y.M.C.A. of Greater New York, said in an interview earlier this month.

Selling the camps was a matter of necessity after the Y.M.C.A. faced a $100 million revenue shortfall at the end of 2020.

Camp alumni, volunteers and children were upset to learn that the camps were being sold, and livid that they were not consulted beforehand.

Emily Van Ingen, a former board of managers member for the camps, said in an interview that alumni were still disappointed with the process, but were optimistic about the Wend Collective.

“I think that we’re all trying to close the book with the Y.M.C.A. and open this new chapter with Wend, and continue to ensure that the children who were served by the camp have a place to go,” Ms. Van Ingen said.

“It was a very difficult decision made in a moment in time when we were in crisis,” Ms. Greenberger said.

Now, she continued, “I think we have a win-win for everybody.”

After getting off the 7 train at Grand Central on my way to work, I made a beeline to pick up a $2 breakfast sandwich. Like most New Yorkers on an early Tuesday morning, I was focused on getting from Point A to Point B with as little human contact as possible.

I heard a man call out to me as I entered the cafe. I turned around to find a sanitation worker, one of “New York’s Strongest,” trying to catch my attention.

I thought he merely wanted me to hold the door for him, but he surprised me with a question.

“Excuse me, sir,” he said. “But what scent are you wearing?”

Confused and a bit hesitant, I told him Tom Ford, but that it had a French name I couldn’t pronounce.

He proceeded to confirm the name for me, in French, and then to educate me on Tom Ford’s trailblazing position in the fragrance world, as well as how trends spread through the industry, from the acceleration of rose scents to the impact of Bleu de Chanel.

As I listened, I found it somehow ironic and yet utterly unsurprising that a sanitation worker was explaining all of this to me.