How About Renting My Pool for an Hour or Two?

The Best (and Worst) Metro Areas for Electric Cars
Anasayfa » Sağlık » House Hunting in Latvia: A Sprawling Forest Compound for $513,000

House Hunting in Latvia: A Sprawling Forest Compound for $513,000

A 25-Acre Estate in the Latvian Countryside

This 25-acre resort and private residence is situated inside Gauja National Park, about 50 miles northeast of Riga, in rural central Latvia. The property comprises a four-bedroom main residence as well as four guest cottages and outbuildings designed for community gathering and wellness, including an event space and a sauna.

The residences, which are being sold furnished, are made of wood logs over concrete foundations. The grounds also contain several ponds, a fire pit, and meadows suited for “celebrations in fresh air,” said Zane Borisevica, the marketing director of Latvia Sotheby’s International Realty, which has the listing.

From the road, a driveway leads to one of two parking areas, on the eastern side of the grounds. At the center of the property sit two communal buildings, each designed for revelry or reflection: One houses a library and reading room; the other is a celebration hall with several rectangular tables under a constellation of pendant lights.

The living room in the main house. All of the houses on the property were built with wood logs over concrete foundations.Credit…Courtesy of Latvia Sotheby’s International Realty
An entrance hall unfolds into the open kitchen and dining room. Stairs lead up to three bedrooms.Credit…Courtesy of Latvia Sotheby’s International Realty

The four guest cottages are clustered nearby — two with four bedrooms apiece (a recent update, Ms. Borisevica said), one with two bedrooms, and one with just a bedroom and bathroom (no kitchen).

The 1,900-square-foot main house, with beamed ceilings and glass doors throughout, is toward the west, over a small bridge that crosses one of the ponds. Its porch runs along the facade and wraps around one side. The entrance hall leads to a bedroom, as well as to the living room and a combined kitchen and dining room, with brick counters topped with butcher block. Stairs from the dining area lead up to three more bedrooms.

Construction of the sprawling property began in 2007, and it is “always changing,” Ms. Borisevica said, with incremental additions including the 350-square-foot sauna building. It has been used as a hospitality business by previous owners, and comes with the needed accessories, from tableware and furniture to outdoor entertainment equipment.

Gauja, Latvia’s oldest and largest national park, offers forests, sandstone cliffs, hiking trails and six medieval castles, among other attractions, and encompasses three towns — Straupe, Sigulda and Cesis. The property is about six miles outside of Cesis (population 18,000), and 90 minutes from Riga, Latvia’s largest city, and its international airport.

Home prices in Riga, Latvia’s waterfront capital, with about 630,000 residents, fell sharply in the decade following the 2009 global economic crisis, and the city struggled to make up those losses, said Diana Fridenberga, the managing director of Ober Haus Real Estate Latvia. “There is still room for growth,” she said.

Although prices were rising annually before the pandemic, the increases were shrinking each year, from about 8 percent in 2016 to 2.3 percent in 2019. 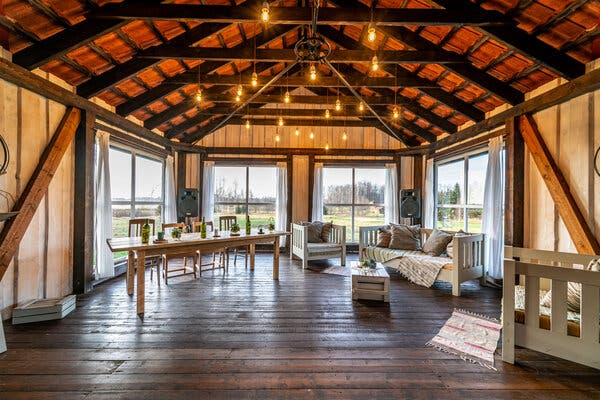 In the celebration hall, used for parties and other events, a constellation of pendant lights brighten the vaulted ceilings. Credit…Courtesy of Latvia Sotheby’s International Realty

Irina Alazova, the CEO of Mercury Group Limited, a Latvian real estate company, said that starting in 2015, it became “almost impossible to get mortgages,” after the government tightened lending restrictions. Around the same time, the country’s residential permit program, which allowed foreign buyers to apply for permanent residence, increased its minimum required purchase, causing the number of participants to drop.

When the pandemic hit, apartment sales in Riga fell further. But, as in most other European countries, they picked up toward the end of 2020 and have remained on an upward trajectory in 2021.

“Real estate is very active in Latvia at the moment,” Ms. Alazova said. “Prices started to increase, but very comfortable, slowly. It is time to buy if the one takes real estate as investment.”

Riga’s market is now “characterized by growth in all segments,” Ms. Fridenberga said. In the first seven months of the year, 5,383 apartments sold in Riga, up from 4,653 during the same period last year, she said, citing government figures and the company’s research. The housing stock in Riga is mostly apartments, she said, with an average price of 1,285 euros a square meter ($140 a square foot) in July, up 2 percent over last year.

According to an Ober Haus report, the price for new apartments in Riga’s center and Old Town at the end of 2020 ranged from $197 to $438 a square foot, going up to $548 to $767 a square foot for luxury units. New apartments in other areas of the city were going for $170 to $230 a square foot, while Soviet-era apartments remained much more affordable, Ms. Fridenberga said, adding that buyers typically prefer new construction.

She estimated that, overall, homes in Riga cost less than half or even a third of comparable homes in sought-after European cities like Prague and Berlin.

Ms. Alazova said prices in new buildings, in particular, will keep rising because of several factors, including a “huge increase of the construction costs for the new buildings, increasing of taxes, demand for purchases and lack of offers on the market.”

Another of the outbuildings houses a library and reading room.Credit…Courtesy of Latvia Sotheby’s International Realty

Outside the capital, including in the resort city of Jurmala, the suburb of Pieriga and rural outposts, prices have dropped an average of 6 percent during that period because the flow of tourists and buyers with deep pockets has dried up amid pandemic travel restrictions, said Ilze Mazurenko, the broker of Latvia Sotheby’s International Realty.

But locals have replaced some of those buyers, as Latvians shifted their focus from urban dwellings to more suburban locales rendered feasible by remote work. They’re looking for more affordable properties, up to about $1 million, while foreigners are more often in the $1 million to $7 million range.

“We changed the profile of the buyer and the needs of the buyers,” Ms. Mazurenko said. Before the pandemic, “mainly buyers needed residential apartments in the city center. Now they want to go outside of the city.”

Who Buys in Latvia

“Buyers are a mix of locals and foreign customers, but it must be said that the share of local customers has increased because of the pandemic,” Ms. Fridenberga said, adding that foreign buyers have come from Canada, Britain, Spain, Estonia, Lithuania and Italy.

Ms. Mazurenko said about 80 percent of her firm’s clients are locals and 20 percent come from Northern and Central Europe. There are also buyers from former Soviet bloc nations with “some sort of nostalgic or sentimental memories or knowledge about Latvia, or the ones who appreciate the wild nature of Latvia and the vast historic heritage of the cities and real estate in those cities.”

Ms. Alazova said her firm has seen an increase in buyers from Scandinavian countries, Western Europe and the United States. These buyers tend to prefer new developments, whether houses, apartments or commercial properties. “Most of the nonresidents buy to get a residence permit,” she said.

The four guest cottages are clustered nearby — two with four bedrooms apiece, one with two bedrooms, and one with just a bedroom and bathroom.Credit…Courtesy of Latvia Sotheby’s International Realty

Citizens of countries outside the European Union may face some hurdles when buying real estate in Latvia, said Sergei Petrov, a partner with NJORD Law Firm, an international firm with offices in Riga. For one, they must obtain a permit from the local government before they can purchase property in cities, a process that typically takes a month, he said.

Transactions are handled by a notary, and a lawyer is sometimes brought on, “especially where foreign buyers or sellers are involved,” Mr. Petrov said. Attorneys usually charge a flat rate of 3,000 to 5,000 euros ($3,500 to $5,900), not including a value-added tax.

Buyers should expect to be vetted through the country’s anti-money-laundering rules. “The buyer will need to present the evidence that the money used for buying a real estate is acquired by legal means,” Mr. Petrov said.

The 25-acre property has several ponds, as well as a sauna and a fire pit.Credit…Courtesy of Latvia Sotheby’s International Realty

The Market for Single-Family Rentals Grows as Homeownership Wanes