An Island of Off-the-Grid Homes, Just 50 Miles From Times Square 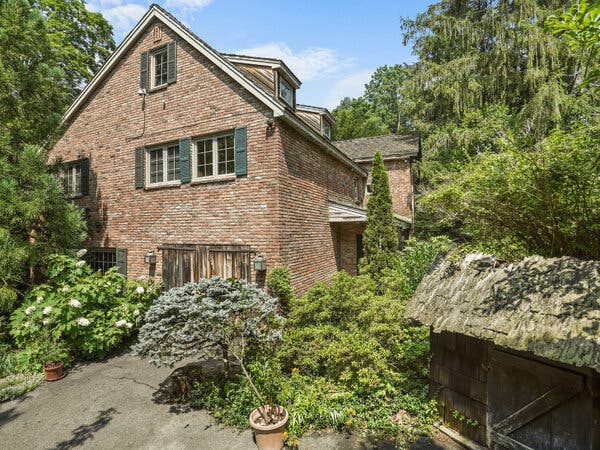 A converted 19th-century blacksmith shop with two bedrooms and three bathrooms, on a 2.2-acre lot with a swimming pool and creek frontage

This property is in the town of Blooming Grove, in Orange County, N.Y., between the communities of Chester (less than three miles southwest) and Washingtonville (about five miles northeast). New York City is about 60 miles southeast and reachable on Metro-North Railroad’s Port Jervis train line, which stops at Salisbury Mills, about 10 minutes away. The area is agricultural and surrounded by preserved forest, although you will also find the Legoland New York resort about eight miles west of this address.

Tax records show the house dating to 1800 and operating as a blacksmith shop at least since 1888, when the proprietor not only shod horses but also forged iron machinery parts for the mills that processed rolled breakfast oats, a leading industry in the area at that time.

Indoors: The property has undergone several expansions, including the addition of residential space. But it still has the room that contained the original forge and is now used as a second living room with a kitchenette. The sellers, who have occupied the house since the early 1980s, updated the mechanical and electrical systems, put in central air-conditioning, landscaped the garden and added a heated pool.

Built on a hillside, the three-level house has four entrances. The main one is at the side of the building and opens to a living room with herringbone-brick flooring that remains from the time when the now-enclosed space was an open porch. A wood-burning stove sits against a fieldstone wall, next to a stone staircase with rough-hewed wood railings. The remaining wall surfaces are wood-paneled or brick.

Folding wood doors to the right of the entrance open to a dining room with a brick floor, exposed beams and a large window with divided lights. Beyond it is a brick-clad kitchen with butcher-block countertops, a corner Miele oven and a copper hood hanging over an electric stovetop.

The staircase takes you up to a mezzanine overlooking the living room, with a slate floor and walls clad in diagonal boards or covered in brick. (A wet bar is built into a credenza.)

From here, you can enter the primary bedroom, which has wood floors, posts and beams, and the use of a bathroom with a pedestal sink and a combined tub and shower. (This area is also reachable from a dining room staircase.) Or you can enter the blacksmith’s forge, which has brick walls, a cathedral ceiling with exposed beams, a wood-burning fireplace and two exterior doors. The attached kitchenette contains rustic cabinetry with vintage iron hardware and includes a sink, refrigerator and two-burner electric stovetop. There is also a bathroom off the forge, with a beamed ceiling and corner shower.

The third level includes the guest bedroom, which has canted walls, a dormer window and an attached bathroom with a sink set into a cabinet and a shower.

Outdoor space: The grounds are thick with vines, shrubs and flowers, and include fruit trees, hostas, vinca and phlox, to name just a few species. Off the forge is an enclosed herb garden and brick-paved patio. The original millstream lies at a distance from the house, which is elevated (the property is in a flood plain). Parking is in a one-car garage that connects to the dining room and has an attached laundry room. 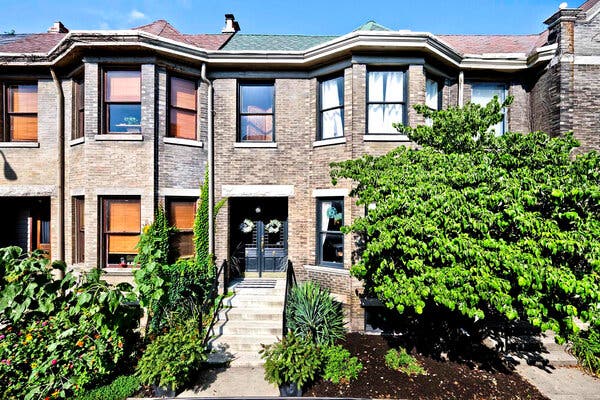 A two-story brick-and-brownstone rowhouse built in 1890, with three bedrooms and three and a half bathrooms, on a 0.04-acre lot

This house is in the St. Joseph Historic Neighborhood, about a mile and a half north of Monument Circle in the heart of downtown and several blocks north and west of Massachusetts Avenue, a diagonal that has a large concentration of shops, restaurants, bars and markets.

The listing agent bought and rehabbed the then-three-unit property in 2015 before selling it a year later. The current owner added coffered ceilings and crown moldings, a basement wet bar and an enhanced backyard deck. He also tuck-pointed the exterior brick.

Indoors: Double front doors open to a foyer with exposed-brick walls. This surface was discovered behind drywall that was ripped away during the renovation. The hardwood flooring is original.

To the right of the entrance is a combined living and dining room that has a decorative fireplace with a Victorian mantel and a bay window that lies at the base of the projecting facade. This room is open to the kitchen, which was installed during the 2015 renovation and has had some updates, including new appliances and additional cabinetry. The custom cabinets were built by a local kitchen supplier and have quartz countertops and a niche for a desk. A trio of industrial-style pendant fixtures hangs over the marble-topped island. A powder room off the kitchen includes a pedestal sink and marble basket-weave floor tile.

The primary bedroom sits above the living room, with a bay window and a cast-iron fireplace set into a wall of exposed brick. Under the carpet are original hardwood floors. The room also has a windowed walk-in closet and an en suite bathroom with double vessel sinks on a vintage wood cabinet and a walk-in shower. The guest bedroom suite at the rear of the house includes a wall of exposed brick and a bathroom with a vintage-style slipper tub.

In the daylighted lower level are a bedroom and a bathroom with a shower, in addition to the wet bar.

The home has two laundry rooms, on the second floor and in the basement.

Outdoor space: The backyard is fully fenced and offers a hard surface and artificial turf. The seller added the hot tub and outdoor kitchen. There is no off-street parking.

Situated in a midcentury subdivision in the Windsor Park area, this house is about six miles northeast of downtown and four miles from the University of Texas at Austin. It is up the street from a shopping center with a popular restaurant called Hank’s and a mile from the 57-acre Bartholomew Park, which has a community swimming pool. Mueller, a mixed-use development with shopping, green spaces and other amusements, is a little more than a mile southwest.

Indoors: Unlike many Austin houses that have been spruced up without permits in the frenzied real estate market, this one underwent a fully permitted renovation three years ago, from the studs out, and the roof has been replaced. It now centers on an open living room, dining room and kitchen with wood flooring and recessed lighting (not counting the Sputnik-style ceiling fixture in the dining area). The kitchen has been outfitted with white cabinets with Silestone (a material that is mostly quartz) countertops, including the waterfall surface on the island, where you can also find a pot filler.

The primary bedroom faces the street. Behind a sliding barn door is an en suite bathroom with a quartz-topped vanity and a tiled open shower. Two additional bedrooms share a bathroom with double sinks and a bathtub with a partial glass enclosure and a shower head.

Outdoor space: The large, fenced backyard has concrete and gravel patio surfaces. A garden shed sits at the foot of the lawn. There is also a deep front yard sprinkled with trees and a carport for parking.

A Sand Trap That Golfers Might Love: Beachfront Courses