Moving to the Theater District and Finding His Community

How Old Is This Old House?

A Quarter-Century Ago, She Landed a Brooklyn Unicorn

How Does My Garden Grow? With a Little Help from My Friends.

Can You Still Afford a Mortgage?

This four-bedroom, four-bath home sits inside the gated resort community of Playacar, in the city of Playa del Carmen, on the east coast of Mexico’s Yucatán Peninsula. Built in 2000 and gradually upgraded, the stone and cement house combines many local materials and architectural features, including palapa roof coverings, made of dried palm fronds.

“This home is part of a prestigious community of about two dozen homes, within Playacar’s second phase of development, that has its own pool and tennis courts,” said Judi Shaw, the owner/broker of Living Riviera Maya Real Estate, which has the listing. “They also have their own pathway to the beach — it has a gate and only these homeowners have keys.”

The price for the 3,657-square-foot home, which has been a popular rental property, includes the furnishings, Ms. Shaw said.

The main entrance, sheltered by a palapa overhang, is on the front of the house facing a driveway with space for two cars. It opens into a small foyer with a wood staircase to one side. Up a few steps is the main living area, an open, tiled space combining kitchen and living room. The kitchen counters and breakfast bar are made of ticul, a locally quarried limestone.

Decorative stained-glass windows, used throughout the house, bring in ample light and provide privacy from neighbors on either side. A hallway opposite the main entrance leads to a large wood deck with a palapa-covered dining area and built-in benches. Below the deck is a tiled patio with a bar. Stairs from the deck lead to another covered terrace above. The decks overlook the community pool.

Two bedrooms — one with two twin beds and one with a queen — as well as two baths flank the hallway.

The stairway in the main foyer leads up to the primary suite, which has a striking vaulted ceiling painted to resemble the sky and illuminated with uplighting. Closets line one wall, with a built-in vanity in the center. On the opposite wall, marble steps lead to a whirlpool tub framed by large stained-glass windows. A separate shower room is just off the bedroom.

Another bedroom on the second floor has an en suite bath and outdoor access via a spiral staircase.

The Playacar community, in the southern corner of Playa del Carmen, also has a golf course and an array of private beach clubs and beachfront hotels on the Yucatán’s Caribbean coastline. Pedestrian-only Fifth Avenue, packed with shops, restaurants, bars and cafes, is within walking distance. Xcaret Park, a popular water-oriented theme park and resort, is a few miles south of the city. Cancun International Airport is about a 45-minute drive. 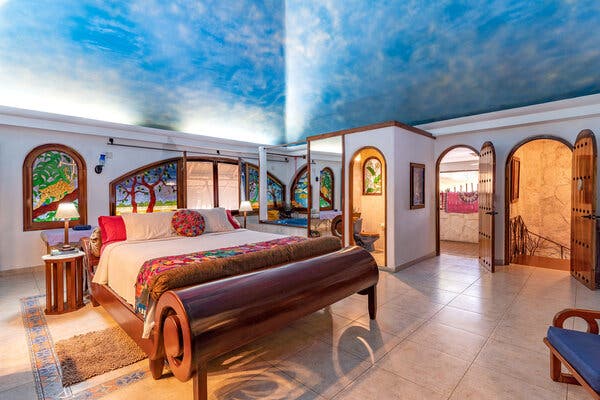 The primary suite has a vaulted ceiling painted to resemble the sky and is illuminated with uplighting. Marble steps lead to a whirlpool tub.Credit…Courtesy of Living Riviera Maya Real Estate

Playa del Carmen, in the municipality of Solidaridad in the state of Quintana Roo, is one of the largest cities on Mexico’s Riviera Maya coastline, with a population of roughly 305,000. It sits between the resort destinations of Cancun and Tulum.

Primarily a second-home market, the city has seen a sharp uptick in demand from buyers seeking refuge from pandemic lockdowns, agents said.

“We have a history of traditionally being a buyer’s market because there’s just a lot of inventory — I like to say there’s a lot of candy in the candy store,” Ms. Shaw said. “But suddenly we had a lot of longstanding inventory get snapped up last year and early this year. So that’s making it more of a balanced market.”

At the national level, the average sale price of a home rose 5.4 percent in the fourth quarter of 2020 compared with Q4 2019, to 1.2 million pesos ($59,000), according to Mexico’s Federal Mortgage Society, which tracks the price of homes with mortgage credit. (The country does not have a multiple listing service.) In Quintana Roo, home prices rose 7.5 percent in 2020, the fifth-largest increase among Mexico’s 32 states.

In the first six months of this year, Ms. Shaw said, her agency sold the same number of properties as in the first half of 2020, but the average sale price was higher, at $435,500. (Many properties in Mexico, including this one, are marketed in U.S. dollars.)

Ivan Castillo, a real estate attorney and general manager of Secure Title Riviera Maya, said that before the pandemic shutdown in early 2020, his company’s offices throughout Mexico were each opening around 40 to 45 files a month. Now, the average is closer to 100.

Prices in Playa del Carmen start at just under $200,000 for a two-bedroom condo farther from the beach, said Jason Waller, the owner of Playa Real Estate Group. Condos closer to the beach are typically priced between $300,000 and $450,000, while beachfront homes are now selling for over $1 million, he said.

A hallway opposite the main entrance leads to a large wood deck with a palapa-covered dining area and built-in benches. Credit…Courtesy of Living Riviera Maya Real Estate

“We have a lot of clients from New York, and a lot of people are looking for beachfront houses so they can enjoy life on the beach if there’s another lockdown, instead of being stuck in a condo in the city and hating their family,” Mr. Waller said.

Compared with Cancun, Playa del Carmen is less expensive and more walkable, he said, adding, “almost every street leads to the beach.”

Mr. Castillo said he believes there is more value in buying in Playa del Carmen compared with Tulum, 40 miles down the coast, where rampant development is growing in “such a disorderly fashion” that services such as water, electricity and internet access are becoming strained.

Who Buys in Playa del Carmen

The majority of foreign buyers in Playa del Carmen are from the United States (particularly Texas and New York City) and Canada, agents said.

“We’ve really noticed an upswing from Europe this year,” he said. “We just hired a French-speaking agent.”

Mr. Castillo said the majority of his foreign clients are from Canada and, because the country was shut down for so long, most are buying properties in the pre-construction phase. “I send them a power of attorney to sign so I can represent them to take physical possession and take title if necessary on their behalf,” he said.

The home sits inside the resort community of Playacar, in southern Playa del Carmen. Along with a pool, the community has a golf course and an array of beach clubs and hotels. Credit…Courtesy of Living Riviera Maya Real Estate

Mortgage financing is not available to foreigners in Mexico. Most deals are done in cash, Ms. Shaw said.

The agent’s commission is usually 6 to 7 percent, which, on a resale, is paid by the seller.

The transfer tax in Playa del Carmen is 3 percent of the purchase price, Mr. Castillo said. Total closing costs, including the cost of setting up the trust, typically run between 4 and 7 percent.

Annual property taxes on this home are $375, with monthly homeowner’s association fees of $140.

The Best and Worst Cities to Live Without a Car

Should You Get Flood Insurance for Your Home?