The Delta variant carries a higher risk of hospitalization, a study finds.

In a Handful of States, Early Data Hint at Rise in Breakthrough Infections

It’s Wednesday. We’ll track the still-blustery nor’easter that has been swirling over the New York area for more than 36 hours. We’ll also catch …

It’s Wednesday. We’ll track the still-blustery nor’easter that has been swirling over the New York area for more than 36 hours. We’ll also catch up on the second mayoral debate. And we’ll hear from our restaurant critic, Pete Wells, who has rediscovered Midtown. 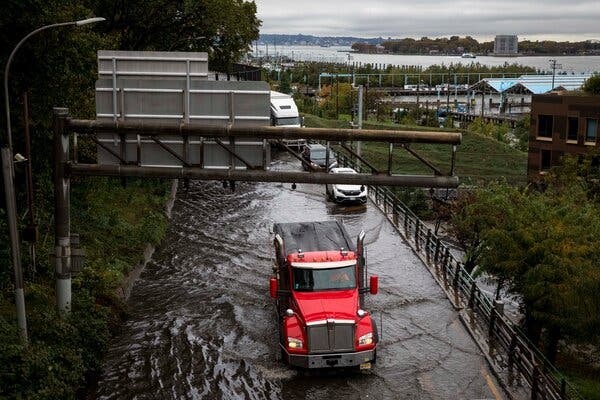 It’s almost done with New York, but not quite. The nor’easter that charted a relentless course up the I-95 corridor packed a one-two punch. After clobbering the region with rain Monday night and yesterday, it switched to high winds that could knock down trees and power lines. That would create fresh havoc on roads that on Tuesday looked more like choppy waterways.

But the nor’easter did not deliver a knockout. The worst fears, a repeat of the devastation brought on by the unexpectedly deadly dregs of Hurricane Ida last month, seemed not to materialize. As the rain subsided and the wind surged, officials warned of potential power failures, particularly in coastal areas.

We can expect a blustering morning and a brisk autumn day with temps around 56. “It’s going to be breezy, but the wind should be coming down,” David Stark, a meteorologist with the National Weather Service, told me at 4 a.m. today. As the storm system churns its way into the Atlantic, eastern Long Island and Connecticut will feel the strongest gusts.

The second and last debate of the mayoral campaign was more aggressive, more adversarial and more acrimonious than the first.

The two candidates covered many of the same topics. But Curtis Sliwa, the Republican nominee, repeatedly talked past time limits as he attacked Eric Adams, his Democratic opponent, who tried to keep a stoic, above-the-fray smile.

That lasted for about 15 tense minutes. “You are acting like my son when he was 4 years old,” Adams declared. “Show some discipline so we can get to all of these issues. You’re interrupting, you’re being disrespectful. Show a level of discipline. You want to be the mayor of New York, start with discipline.”

As my colleague Emma Fitzsimmons writes, the debate, hosted by ​​WABC-TV, gave Sliwa one last chance to try to tackle Adams. But Sliwa’s fiery performance, a week before Election Day, might have come too late to change the dynamics of the race, even as he repeatedly slammed Mayor Bill de Blasio’s record and referred to the mayor as Adams’s “friend and teammate.”

“Is there a grade below D-minus?” Sliwa responded when asked to assign a letter grade to the mayor. “F!”

Adams gave de Blasio a B-plus. Both candidates agreed that de Blasio’s universal pre-K program was his principal achievement. Adams, who has tried to distance himself from de Blasio’s vaccine mandate for municipal workers, said he did not oppose them but would have communicated with union officials before announcing them. Sliwa called the mandates “madness” and said unvaccinated workers could have been tested weekly. Under de Blasio’s policy, they will go on unpaid leave.

“When I’m mayor, I’m hiring them all back,” Sliwa said, “and I’m giving them back pay.”

Promising to repair gaps in the safety net

After several children were beaten to death at home as summer waned, New York City is making changes to improve coordination between the police and the city’s child welfare agency.

This came as three of my colleagues — Andy Newman, Ashley Southall and Chelsia Rose Marcius — focused on four children who had been the subject of prior reports about possible or suspected abuse.

[These Children Were Beaten to Death. Could They Have Been Saved?]

The number of homicides of children in the city this year is close to that of recent years, but the four deaths exposed gaps in the multiagency safety net. In recent weeks, city officials have examined how investigators skipped steps, were slow to follow up on warnings about suspected abuse or might have closed cases too soon.

In response to questions from The New York Times about possible missteps, the city said it would keep closer watch over families that have been subjects of reports of suspected abuse.

Changes include appointing a captain to oversee child abuse cases in the police Special Victims Division, effectively reinstituting a position that was eliminated a year ago; requiring home visits by the police in suspected abuse cases when someone in the family has a history of domestic violence; and restarting a cross-training program between the Police Department and the city’s child welfare agency, the Administration for Children’s Services. That program was dropped last year when the pandemic closed in.

Midtown is back on the menu

For us locals who once complained that Midtown was clogged with tourists, he says it’s rebounded to where it’s half-clogged. He felt relieved to see taxis again after months when Midtown was unnaturally quiet. A few landmarks, like the “21” Club and Shun Lee Palace, are still dark. The Grand Central Oyster Bar didn’t reopen for good until last month.

And now? Midtown is once again the place where the main dish is New York, New York — no matter what restaurant you go to. Here’s one of the many choice parts in his critic’s notebook piece:

Just as there are many New Yorks, there are many Midtowns, too, all on top of one another, each with its own restaurant scene. The one I knew best was the king-of-the-hill, top-of-the-heap Midtown, where chefs perform on grand stages that will never be mistaken for neighborhood joints. This is the realm of Le Bernardin, Aquavit, Gabriel Kreuther and Empellón.

But I knew what those places can do. Instead, I explored Japanese Midtown, an extensive network that stretches almost from river to river. I checked in on Steakhouse Midtown, flourishing, or at least surviving. I looked for the Midtown where workers on hourly wages stand in line at Margon for Cuban ropa vieja stewed so long it practically turns into marmalade, and the one where on any given night three or four billionaires will spend thousands of dollars on wine and pasta without looking at the menu.

Before showing up for dinner at Patsy’s, the Neapolitan restaurant that gave Frank Sinatra not just his own table but his own entrance, I asked somebody who has eaten there all his life what to get. He had no idea; his father, who goes once a week, always does the ordering. So he asked his father, who named two dishes that aren’t on the menu. It’s that kind of place.

Even without an inside tip, you can put together a meal at Patsy’s — rigatoni fra diavolo, say, or fennel sausages in marinara with a heap of sweet peppers — that reminds you just how good Southern Italian food refracted through a New York lens can be. Decades of shortcuts, cheap-outs, infidelities and distortions gave red-sauce cuisine a reputation as a debased, degraded creature. None of that happened at Patsy’s.

I wouldn’t say this if Sinatra were around, but Patsy’s does not make my favorite veal Parm in Midtown. For that, I go to Pietro’s on East 43rd Street.

[17 Restaurants to Bookmark for Your Next Visit to Midtown]

Some years ago, my daughter rented her first apartment in Manhattan. She asked me to come in from Queens to wait for a furniture delivery so that she wouldn’t have to take time off from her new job.

The delivery came very early, leaving me with the rest of the day to myself. I walked down Third Avenue, window-shopping and people-watching.

After a few blocks, I came to a movie theater that was showing a Swedish film I had planned to see when it came to my neighborhood. Perfect!

I bought a ticket, went inside and chose a seat in the middle of the theater.

As the lights went down, a woman came in and took the aisle seat of the row I was in. After the movie ended, she approached me.

“Can we talk about the movie a little?” she asked.

We did for several minutes. Then she thanked me and left.

How the Mayor’s Big Decision Could Upend N.Y.C. School Admissions