How a Young-Adult Novelist Spends Her Sundays

For Seniors Especially, Covid Can Be Stealthy

R. Kelly Sexually Abused Aaliyah When She Was 13 or 14, Witness Says
Anasayfa » Manşet » Tonight, a Night at the Theater

Tonight, a Night at the Theater

It’s Tuesday. The costumes, the scenery, the makeup, the props — everything about it is appealing, as the Irving Berlin song says. Broadway will …

It’s Tuesday. The costumes, the scenery, the makeup, the props — everything about it is appealing, as the Irving Berlin song says. Broadway will be back tonight. 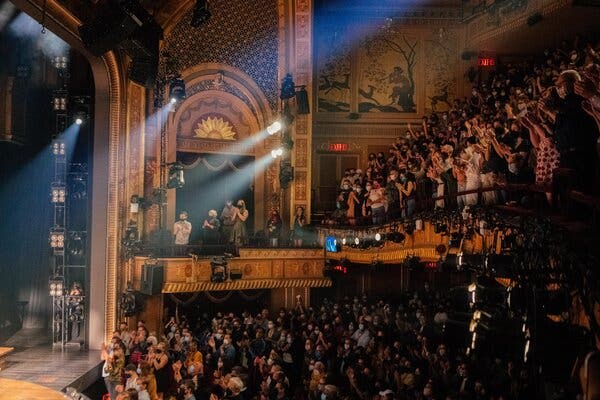 The actors’ cues have been checked and double-checked, the costumes freshened up, the lights focused and positioned. And as my colleague Michael Paulson writes, Broadway is determined to rebound.

Symbolically and emotionally, tonight will be a milestone for New York. Whether it turns out to be a good milestone or a not-so-good one won’t be known for a while. If all goes well — if we don’t see reports of infections among first-nighters — the crowds that Broadway counts on could feel comfortable taking their seats again.

If not, New York could be in for what Mili Diaz, who will make her Broadway debut in “Wicked” tonight, called “another hundred years of quarantine.”

She will play Nessarose, a.k.a. the Wicked Witch of the East. Her debut will be several orders of magnitude above her first performance in that role in a touring production of the show. That was in Indianapolis in 2018. A Broadway debut is an unforgettable moment in any actor’s career. She used words like “unreal” to describe this one.

Then she talked about a moment just before the dress rehearsals over the weekend.

The audience was energized, just as the performers were. Patrick Goodwin, a casting director who attended the invited dress rehearsal of “Wicked” on Sunday, wrote that the applause “was so loud that my Apple Watch gave alerts” about decibel levels “unhealthy for sustained listening.” It’s a sound that hasn’t been heard since March 12, 2020.

As Michael explained, Broadway is a major employer that has become an indicator of the city’s economic and emotional well-being. Broadway weathered the city’s fiscal crisis of the 1970s, the cleanup of Times Square in the 1990s and the recovery after the Sept. 11 attacks. Now the producers are betting that the audience is ready to make an entrance, vaccinated and masked.

Still, Michael sees reasons for hope. Four productions — the concert show “Springsteen on Broadway,” the new play “Pass Over,” and the musicals “Waitress” and “Hadestown” — started performances this summer. They served as laboratories for Broadway’s safety protocols. So far, none has missed a performance.

There was noise in the city’s classrooms Monday as the nation’s largest school district reopened for full-time, in-person classes. There was exhilaration. There was delight (perhaps more among parents than students). And there was chaos. As my colleague John Woods put it after taking his son Theo to the first day of third grade: “A mob scene at the schoolyard. Disorderly line. Dogs. Distracted parents. Not sure if it was just jitters, or the fact that so many were all remote last year and aren’t used to drop-off.”

Mayor Bill de Blasio said Monday was “a day that was a game changer, a difference maker, a turnaround day” for the city. But the website that parents use to answer Covid-19 screening questions flunked its first big test: It crashed as hundreds of thousands of people logged on. That led to long lines at some schools, with staff members using old-fashioned paper forms to record how each child was feeling.

It’s another mostly sunny September day, perhaps not as summery-hot as Monday. Savor temps in the high 70s. They’ll climb back into the mid-80s on Wednesday.

Down on the farm? This farm is eight stories up.

Ben Flanner was planting beets in a neat row. It was just another day on the farm.

Except that this farm is eight stories above the street, on the roof of a newly completed section of the sprawling Javits Convention Center in Midtown Manhattan. And it has something that Old MacDonald didn’t have: a view of the Empire State Building.

You won’t hear an oink-oink here or a moo-moo there — there’s no livestock. Nor is there a rattletrap tractor, as on “Green Acres.” The Javits Center farm is not even a green acre. It’s just shy of a full acre. And it has something “Green Acres” did not have: Soil that got there through a pipe from dump trucks on the street. That was faster than offloading carts full of soil and herding them into elevators.

The farm is a sign that the Javits Center is leaving its pandemic existence behind. It housed a hospital for Covid-19 patients last year and a vaccination center this year, until July. Now it is once again a place for spotlit displays and carefully miked panelists. The Armory Show, the first major art fair since the pandemic, opened last week. This week, a conference led by the onetime Trump administration adviser Anthony Scaramucci is on the schedule. The tickets cost as much as $9,000.

As for the farm, planting had been planned since 2018. Alan Steel, the Javits Center’s president and chief executive who led me on a tour last week, expects the farm to deliver 40,000 pounds of produce a year. Flanner and colleagues from Brooklyn Grange, the urban farm developer he co-founded, will put 51 crops in the ground, from arugula to zucchini, in sequence — and all of it will be served steps away, to people attending functions at the Javits Center.

West of the farm, on another section of the roof, is an orchard with more than 30 apple trees and a few pear trees. The Javits Center team had picked a few apples — McIntoshes and Liberties — but warned that they might not be ripe yet.

I wanted someone with more refined taste buds to taste them, so I enlisted the Food columnist Melissa Clark. She said the McIntosh was “pleasingly crisp in texture, with a flavor on the tart side of a Granny Smith — puckery but with just enough sweetness lacing through.”

But the Liberty “gave me a squinty-eyed pickle face immediately,” she reported, adding: “I couldn’t get beyond one bite.”

The man I have now been married to for more than 50 years and I were still dating at the time. We were walking along lower Fifth Avenue on a Saturday evening when a car pulled up.

“Where is the Electric Circus?” the people in the car yelled out.

For those who don’t know, the Electric Circus was a nightclub on St. Marks Place that was a popular destination for the city’s hippie culture in the late 1960s.

My husband explained where it was.

“How is it?” they asked after thanking him.

He had never been and in fact disdained such establishments, but he answered anyway.

After they drove off, I asked him why he had said that.

“They were going anyway,” he said. “Why spoil it?”

Unvaccinated Americans are 11 times more likely to die of Covid, the C.D.C. reports.

Kathy Hochul, and What Her Time as Governor May Hold