The Contentious Issue That’s Boosting a Republican on Long Island

R. Kelly on Trial in Brooklyn

It’s Monday. With the Nov. 2 election eight days away, we’ll look at Eric Adams, the globe-trotting, meditating former police officer who is …

It’s Monday. With the Nov. 2 election eight days away, we’ll look at Eric Adams, the globe-trotting, meditating former police officer who is poised to be New York’s next mayor. We’ll also look at a high-tech take on the player pianos of a century ago. 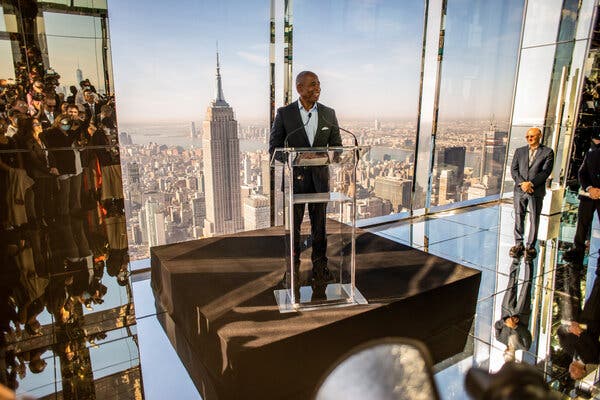 “I am you,” Adams tells voters.

It’s not flattery. Or puffery.

Adams, a Democrat who has been the Brooklyn borough president since 2014, is something of a changeling. He disseminates and discards narratives about himself, rarely worrying about the details. Three of my colleagues — Matt Flegenheimer, Michael Rothfeld and Jeffery Mays — write that Adams’s guiding principle sometimes appears to be perpetuating the Eric Adams story.

It’s a story that has resounded across contrasting constituencies — police officers and police critics, real estate developers and service workers. It reflects Adams’s ability to live with, and live out, contradictions.

Politically, he has described himself as a “pragmatic moderate” and “the original progressive.” He has built relationships with Mayor Bill de Blasio, a professed progressive, and Michael Bloomberg, de Blasio’s billionaire predecessor. The day after Bloomberg released a video endorsing Adams, Adams declared, “New York will no longer be anti-business.” Two days after that, Bloomberg hosted a fund-raiser for Adams.

And Adams has been celebrated by the right-leaning New York Post, first with an enthusiastic endorsement that no doubt vexed his opponents in the crowded Democratic primary field in June. In re-endorsing him last week, The Post said he was “far better suited” than his Republican opponent, Curtis Sliwa, to “get on top of the crime and public disorder plaguing New York.” The Post added that “he represents the promise of dragging the entire local Democratic Party” away from what it called “the AOC/de Blasio wing” and “back to sanity.”

Adams liked to say that his opponents in the primary hoped voters would “hear” their message. He wanted them to “feel” his, which centered on what many would consider a contradiction — that public safety and police reform could coexist.

“This should be a very interesting experience for us, having him as mayor,” said David Paterson, a former governor and a longtime friend of Adams.

How would Adams wield the power that being mayor confers? Almost no one — including, it sometimes seems, Adams himself — knows. My three colleagues interviewed 130 of Adams’s friends, aides, colleagues and associates. They wrote that the only consensus was that there are any number of possible outcomes for an Adams administration. Relentless reformer or machine politician? Forthright truth-teller or flickery narrator?

Unlike most mayors, who arrive in City Hall at a disadvantage in dealing with state government, Adams can look forward to considerable deference from Gov. Kathy Hochul, who is running for a full term next year. That could give Adams leverage his predecessors lacked, because her chances in a statewide primary could depend on his coalition of nonwhite voters in the city.

“He’s finally gotten to the point in his life where he has some juice,” said Norman Siegel, the former leader of the New York Civil Liberties Union and a longtime supporter. “Now that you have the power, are you going to use it?”

He will, his allies say, even if he has not mapped out specific steps to take.

“People will make a mistake if they think they know what he will do,” said Bertha Lewis, a civil rights activist who has known Adams for decades. “But I believe he will actually do something about this tale of two cities.”

Even he sometimes seems unsettled about what direction he is going in. After meeting with President Biden at the White House in July — where he referred to himself as “the Biden of Brooklyn” — Adams spent a moment telling reporters about his unusual résumé.

He was a former police officer, he said, as well as a former Republican (briefly, when Rudolph Giuliani was mayor) and a former juvenile scofflaw who had been assaulted by the police.

“I’m so many formers,” he said, smiling a little. “I’m trying to figure out the current.”

Take care, New York, there’s a flash flood watch tonight through tomorrow. Expect a cloudy day and a chance of showers and thunderstorms in the evening. Temps in the low 70s during the day will drop to the high 50s at night.

Playing one piano in many places at once

No one expects anything like “Mr. Watson, come here” — Alexander Graham Bell’s first words over a telephone. Just some music, played on a piano in Beverly Hills, Calif., and on a piano in Manhattan.

The concert this afternoon will be the debut of SpirioCast, the latest addition to Steinway & Sons’s high-tech take on the player pianos of a century ago. At the keyboard in Beverly Hills will be Kris Bowers, who wrote the score for the film “Green Book.” (He co-directed The Times’s Op-Doc “A Concerto Is a Conversation,” an Oscar nominee this year.)

His piano and one in Steinway’s showroom on the Avenue of the Americas in Manhattan will be outfitted with Steinway’s Spirio r system. The piano in Manhattan will reproduce every note of the set Bowers plays. Other Steinway showrooms around the country will also play the concert.

Steinway says the Spirio technology, which relies on software instead of old-fashioned rolls of perforated paper, matches the nuances of touch and tone from one piano to another. Steinway has 4,000 pieces recorded by leading musicians like Lang Lang, Bill Charlap and Ramsey Lewis that can be played back on Spirio-equipped pianos; the Spirio r is the version of the system that allows users to play from that library and to record their own playing. Steinway holds a patent on its Spirio system, just as its competitors have patents on theirs. (Yamaha says its Disklavier system is “the reproducing piano everyone is trying to reproduce.”)

Feidner said the team that developed SpirioCast largely worked remotely because of the pandemic. He himself tested the system, playing a Mozart sonata one morning last year. “These guys in Hong Kong, Shanghai and Hamburg were listening to me play,” he said. “I remember thinking, I just played the piano on three different continents. Very long distance.”

Two summers ago, I was riding a downtown bus in Manhattan. After taking my seat, I started to look around. I always like to get acquainted with my environment.

Sitting across from me was a man eating sardines from a can. He noticed me staring at him.

“If only I had some crackers to go with it,” he said.

Just then, a woman sitting nearby opened her pocketbook, turned and, without saying a word, handed him a package of saltines.

Landlords and Tenants Worry About Effects of Ruling on Eviction Moratorium