When Your New York Kid Is in the Olympics, You Find a Way to Watch

The Pandemic Has Set Back the Fight Against H.I.V., TB and Malaria

The F.D.A. again warns parents not to get children under 12 vaccinated yet.

‘My Homeland’: A Poet’s Quest to Help a Family Flee Afghanistan

Countdown to a Vaccine Deadline 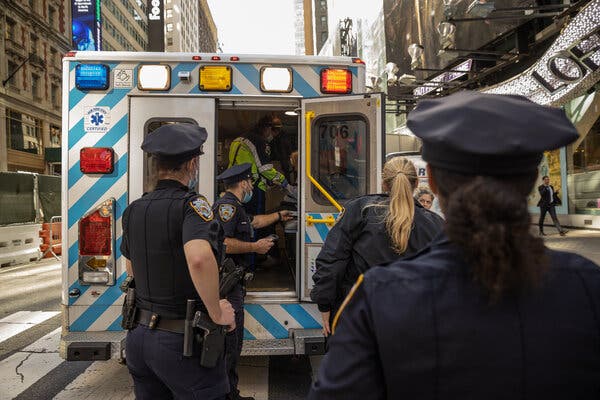 The clock is ticking toward Mayor Bill de Blasio’s 5 p.m. deadline for unvaccinated municipal workers to get a first dose.

as of Thursday: one-third of the employees in the Fire and Sanitation Departments, one-quarter of those in the Police Department and nearly 40 percent of those who work for the agency that runs public housing.

De Blasio, leading one of most aggressive municipal vaccination campaigns in the country, said the city would be prepared if thousands of essential city workers remained unvaccinated on Monday and had to be placed on unpaid leave.

But union leaders — and hundreds of city workers who took part in a protest outside Gracie Mansion, the mayor’s official residence — said that the mandate posed serious risks. Andrew Ansbro, the head of the Uniformed Firefighters Association, a firefighters’ union, instructed unvaccinated members to report for duty on Monday, saying that de Blasio would face the consequences of staffing shortages if any were sent home.

In some ways, New York has been through this before. Predictions of staffing deficits and job losses preceded each of the last two vaccine mandates — one for teachers, which went into effect on Oct. 4, and one for more than a million health care workers across the state, which took effect in two stages beginning Sept. 27.

Each time, thousands of workers rushed to get shots at the last minute, and while there were some staff shortages, a citywide crisis did not develop.

De Blasio expects a similar scenario to play out this time around. “I am not having second thoughts,” he said on Thursday. “We expected that a lot of the vaccinations would happen toward the end of the deadline. We also know a lot of people make the decision once they really realize that they’re not going to get paid.”

Workers had been offered $500 bonuses to get a shot by the end of the workday on Friday. But among the holdouts — who can continue to work through the weekend before being placed on unpaid leave on Monday — the incentive seemed not to matter.

“The mayor seems to have forgotten the sacrifices we made during the pandemic,” said Oren Barzilay, president of the union local representing emergency medical technicians and paramedics in the Fire Department. “Not seeing family members for months on end, long-term health effects and even death. We had a choice then, and our members chose to come to work despite the hazards. Where is our choice now?”

From religious leaders, a plea to close Rikers

The jail complex on Rikers Island was dangerous and dysfunctional before it descended into chaos in the summer, with detainees in near-total control of entire units in some buildings. Now more than 100 religious leaders have written to the two candidates for mayor, urging them to close the jails there by 2027.

The religious leaders declared in a letter to the two candidates that the continued existence of Rikers is “a human rights violation.”

“There is no path that makes Rikers Island an acceptable place to detain our brothers and sisters,” they wrote.

Eric Adams, the Democrat in the race, has said he supports Mayor Bill de Blasio’s plan to shut down the jails on Rikers and replace them with smaller units in the boroughs. He said last week during his debate with Curtis Sliwa, the Republican nominee, that he would also hire 2,000 more officers and send emotionally disturbed inmates to state facilities. Sliwa has repeatedly opposed closing Rikers.

Several religious leaders who signed the letter to the two candidates toured Rikers on Wednesday, among them the Rev. Phillip Jackson, the priest-in-charge of Trinity Church Wall Street.

“They know that because they’re understaffed, they, the detainees, don’t get access,” he said. “The law library was closed. I think they haven’t been going to chapel services. The wardens who were with us, they were open about that. They said, ‘We don’t have the manpower.’

“I came away with a feeling of such deep sympathy for all of the players who are there in that complex,” he said. “That thing needs to close.”

A sexual misconduct complaint is filed against Andrew Cuomo

A criminal charge of forcible touching has been filed against former Gov. Andrew Cuomo in Albany City Court, a spokesman for New York State’s court system said. The complaint came more than two months after Brittany Commisso, a former aide to Mr. Cuomo, filed a criminal complaint against him with the Albany County sheriff’s office. She accused him of groping her breast while they were alone in his residence late last year.

Cuomo resigned as governor in August after a report from the state attorney general’s office concluded that he had sexually harassed numerous women.

The contentious issue that’s boosting a Republican on Long Island

When the district attorney’s post in Nassau County became vacant earlier this year, Todd Kaminsky, a Democratic state senator and former federal prosecutor, was widely seen as the favorite.

But my colleague Luis Ferré-Sadurní writes that one issue has given a boost to his Republican opponent, Anne Donnelly: bail reform laws. Helped by money from the local Republican Party, her campaign has run ads falsely describing Kaminsky as the architect of the 2019 legislation. Her website urges voters to “keep Nassau safe” by rejecting “‘Turn ’Em Loose’ Todd.”

She and Kaminsky have battled over newspaper endorsements and traded accusations of fearmongering about violent crime in Nassau, a mostly affluent white suburban county that boasts it is the safest in the country. Along the way, the race has become a test of how far Democrats can go on criminal justice policies before those policies return to haunt moderates like Kaminsky.

“There’s been an extensive effort by Republicans in this race to give people the perception that crime is on the rise here, and that city crime, which is out of control, is coming here,” Kaminsky said in an interview.

Donnelly, who has worked in Nassau’s district attorney office for more than 30 years, said that “bail reform makes people less safe.” She also said she had made it an issue against Kaminsky “because he owns bail reform.”

You have three days left to vote early — today, tomorrow and Sunday. Here’s the guide to early voting that we published last week.

Expect a mostly cloudy day with temps in the high 50s and a chance of rain. At night, thunderstorms are possible. So are strong wind gusts.

Along for the ride

I was on the M4, reading my book and only aware that I had not yet reached my destination, when I felt a gentle touch on my wrist.

I looked down and saw a praying mantis, full grown and perhaps four inches long. It was an incredible, almost otherworldly creature, with a huge head atop its body and six legs like thin sticks.

It walked hesitantly over my hand and onto my book. Its movements were as strange and wild as its form.

Was I going to shake this beautiful insect off onto the floor of the bus to continue its ride downtown? That way led only to concrete, traffic, more people and probable death.

As the mantis walked slowly and sweetly over my hands, onto the book and then back onto my wrist and arm, I stood up slowly. The look on the face of the woman opposite me was one of horror. How could she see this harmless creature as dangerous?

As the bus continued on, I saw a green patch of garden but no bus stop nearby. Approaching the driver, I asked if he would please let me out.

“This guy really needs to get to some green grass and plants,” I said, holding the mantis up for the driver to see.

He grimaced and shuddered.

“Whoa,” he said, stopping the bus and opening the door near the small triangle garden.

I carried the mantis, still wandering over my hands and my book, to the edge of the plantings. It seemed reluctant to leave me, but I soon urged it onto the first available leaf.

Glad we could get together here. See you Monday. — J.B.

How Josh Ritter, Musician and Novelist, Spends His Sundays

What to Know About Breakthrough Infections and the Delta Variant

Tallying the Cost of Growing Older