N.Y.C. is expected to require shots for all education staff, including teachers and principals.

How the Delta Variant Infiltrated an Elementary School Classroom
Anasayfa » Manşet » Road ‘Warriors’: The Marathon That Looks a Lot Like a Gang War

The Yankees were on the TV, but no one in the north Bronx sports bar had their eyes on the game. Some people were wearing pinstripes, sure, but …

The Yankees were on the TV, but no one in the north Bronx sports bar had their eyes on the game. Some people were wearing pinstripes, sure, but that’s because they were dressed up as characters from a fictional gang called the Baseball Furies. A few were drinking whiskey, though most were chugging water. A man in skintight jeans was sucking on a pouch of electrolyte gel. It was going to be a long Saturday night that ended at Coney Island — and the plan was to run there.

“It’s not an all-out race,” said Ramon Bermo, a 54-year-old ultrarunner originally from Spain who now lives in South Plainfield, N.J. “The streets are closed in a regular marathon, so you race it a little harder. But we still have to be aware. The distance won’t be what’s challenging here.”

It’s true that a 28-mile road race is considered no big deal for people like Mr. Bermo, who regularly runs mind-bending distances. He no longer bothers with the typical 26.2 mile marathon; he is training now for a 200-mile race through the Italian Alps, which he claims is the physical equivalent of climbing Mount Everest three times.

But that night he was dressed in a leather vest with “Warriors” stitched on the back, as a character from the 1979 cult movie about a group of gang members who have to make their way through several boroughs’ worth of enemy territory to their turf in Coney Island. He and the rest of the participants in the 2021 Warriors UltraRun — some of whom had come from as far away as California — would have to wear restrictive costumes, contend with street traffic (as well as confused pedestrians) and find their own bathrooms throughout the night.

These 90 runners were either fans of “The Warriors” or acolytes of Todd Aydelotte, who calls himself the world’s only “historical ultrarunner.” Mr. Aydelotte, who works in public relations and is originally from Rochester, N.Y., first staged this quasi-legal marathon in 2019 with about 30 participants. In doing so, he became a hero among the East Coast subset of ultrarunners, a subculture that primarily exists on the other side of the country.

“He’s uncommon amongst uncommon people,” said Mike Gagliardi, an urban ultrarunner who came from Philadelphia for the race. And even among the obsessive, Mr. Aydelotte seems to be an outlier. His zeal for running long distances emerged as a way to resist alcohol. Now 53, Mr. Aydelotte said he had suffered from an uncontrollable urge to drink since he was about 10, and he approached running with equal intensity throughout his 20s and 30s. “I used to run 10 miles to a bar,” he said. “And in fact, many of the people who do ultramarathons are wired similarly.” After eventually getting sober, he blew out both knees while overtraining for a marathon.

For his big comeback, Mr. Aydelotte ran 50 miles on his 50th birthday — an experience he describes as both exhilarating and boring. That’s because most ultrarunners tend to live in picturesque places like Colorado, where the scenic beauty can help them slip into a zenlike state. But Mr. Aydelotte lives in a neighborhood that can either be called Midtown or the Upper East Side, depending on who you’re asking. As an urbanite, he had to get creative to motivate himself during these painful trips. “I’m trying to replace that physical thing outside with an interior lattice,” he said. 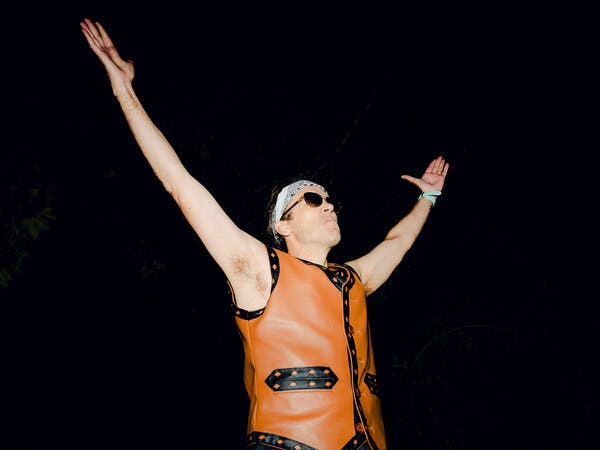 Todd Aydelotte jumped on top of a milk crate to recreate the beginning of the movie, in which the Warriors get framed for a murder. “I say the future is ours,” he lip-synced. At the sound of a gunshot (played on an iPhone), the runners took off down Broadway.Credit…Jonah Rosenberg for The New York Times

His first themed run was a homage to Edgar Allan Poe that he did by himself. Mr. Aydelotte loves history, and his idea grew out of a Poe binge. “I studied his wife,” he said. “I read a biography. He had a horrible relationship with his dad and was a terrible alcoholic. I filled my brain.” He pored over old newspaper clippings and topographical maps, eventually planning a 23-mile route tracing the poet’s life in New York. Then came races themed around P.T. Barnum, the inventor Nikola Tesla and Theodore Roosevelt, to name a few.

Most of the long runs Mr. Aydelotte did in the past were intensely personal and akin to religious experiences, but he decided to open up the “Warriors” run to anyone. This one was intended to be fun. Participants had to sign waivers acknowledging the inherent risk involved in running through New York City in the middle of the night while dressed as a gang member, but that was mostly a formality. The idea of drunk 20-somethings spilling out of Bowery bars at closing time and into a scene from a B-movie was hilarious to him.

Mr. Aydelotte didn’t have to wait that long to get his desired reaction. At 1 a.m., when the group had just left the bar en masse, a confused guy yelled out of his car, “What are you protesting, bros?” People stopped to take pictures as the costumed runners — dozens of Furies and Warriors, as well as a scattering of Van Cortlandt Rangers, Lizzies and Turnbull AC’s — crowded into a parking lot. Mr. Aydelotte jumped on top of a milk crate to recreate the beginning of the movie, in which the Warriors get framed for a murder. “I say the future is ours,” he lip-synced, “if you can count!” At the sound of a gunshot (played on an iPhone), the runners took off down Broadway.

After running with the pack for the first 10 miles, Mr. Aydelotte hopped into his Jeep to manage the rest of the race. He crawled through the Bronx and Manhattan, slowing down particularly in Times Square. He’d heard that one of the runners had commissioned a woman he met on Facebook to wait for him there with a water bottle. “In other marathons that would be cheating,” he said, “but to us that’s resourcefulness.”

Mr. Aydelotte didn’t catch that scene, and in fact, he was caught off guard by how quickly people would run the race. Someone called him just after 3 a.m. to say that two people had already crossed the finish line on foot, at a pace of about 7 minutes per mile. He was still a few blocks away, and he sped down Stillwell Avenue to meet the winner: a 29-year-old named Cory Fleming who was relatively new to the world of long-distance running.

In 2017, Mr. Fleming was clerking for a federal judge in Jacksonville, Fla., with relatively little to do in his free time. A weight-lifting buddy from law school bragged to him about completing an Ironman triathlon, which he’d never heard of but later learned meant running 26.2 miles, swimming 2.4 and cycling 112 more in the same day. He decided to beat his friend’s time anyway, which entailed learning how to swim properly and committing to a twice-a-day training schedule. Within six months, he’d met his goal. Later, after he’d moved to New York, a doctor recommended he take a break from drinking because of a stomach issue. He substituted nightlife with running and cycling long distances on a regular basis. “My girlfriend said the other day that I was addicted to exercise,” he said while sipping a nonalcoholic beer from a communal cooler on the Coney Island boardwalk.

Post-race hang on the Coney Island boardwalk, in the wee hours of the morning. Credit…Jonah Rosenberg for The New York Times

In fact, the scene had the vibe of an after-hours party. Everyone was high on adrenaline and getting rowdy at sunrise. And while Mr. Fleming was ready to head to bed, some of the older ultrarunners were already looking for the next fix. The Philly 10K was in a few hours, someone pointed out, and there was chatter about heading straight there.

Meanwhile, Mr. Aydelotte was already plotting his new project. This time he’d be turning his research inward. He recently found out that he is distantly related to Cornelis van Tienhoven — a bureaucrat in New Amsterdam — whom he called both a “terrible alcoholic” and “the worst person to ever set foot in North America.”

As an act of atonement, he is planning a run to all the sites where Van Tienhoven committed atrocities against Native Americans. “I have not announced this because it borders on the absurd,” Mr. Aydelotte said. “But I’m going to shame him for 200 miles, and it’s going to be awesome.”

He Has Asthma and Cancer. But He Still Was Moved to a Crowded Shelter.

Pioneering Gene Therapy Freed Her of Sickle Cell. Is a Cure at Hand?