10 Deaths, Exhausted Guards, Rampant Violence: Why Rikers Is in Crisis

A Lawyer’s Deathbed Confession About a Sensational 1975 Kidnapping

Are Vaccine Boosters Widely Needed? Some Federal Advisers Have Misgivings.

It’s Friday. We’ll look at a the new mandate that covers some 250,000 home health care workers. We’ll also look at an opera by and for trees …

It’s Friday. We’ll look at a the new mandate that covers some 250,000 home health care workers. We’ll also look at an opera by and for trees. 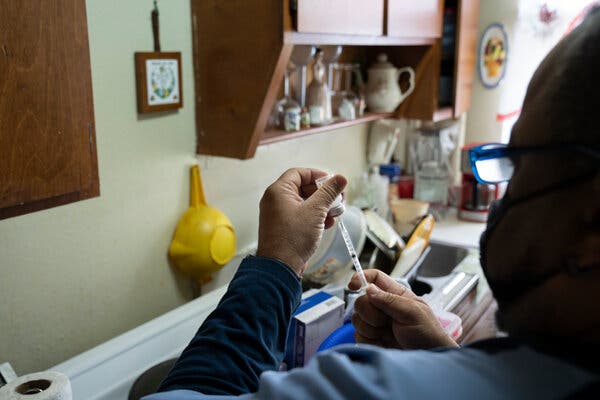 Representatives of the home health care industry are worried that the new state vaccine mandate will prompt thousands of workers to quit their jobs, curtailing care for patients who are recovering from hospital stays or who rely on long-term aides for assistance. I asked my colleague Sharon Otterman to discuss what the mandate is likely to mean.

This is the second phase of the mandate for health care workers in New York. What’s different from the first round?

How many are vaccinated?

Some industry representatives think that as few as seven out of 10 home health care workers — a category of at least 250,000 people in New York — have been vaccinated.

But there was also some evidence that people rushed to get vaccinated as the deadline approached. The Visiting Nurse Service reported a 90 percent vaccination rate on Tuesday and 94 percent on Thursday.

Industry representatives say that even a 5 percent loss of staff could be serious because the field is already short about 100,000 workers. No one’s waiting in the wings to take these jobs, and there are many other fields that pay approximately the same. A home health aide could change to a different, less grueling job where there’s no vaccination mandate, like a retail job.

Or that person could switch to something called consumer-directed care, which is another class of home health aide. Around 30 or 40 percent of the health aides working right now are consumer-directed, which means the patient hires you directly, without going through an agency. Those aides don’t have to be vaccinated.

Gov. Hochul declared a state of emergency, which gives her the authority to deploy the National Guard to cover staff shortages. Is that the best option?

The National Guard is not well suited to being home health aides, industry officials told me. You don’t really want your National Guard recruits going in and helping Grandma bathe.

Why does there seem to be vaccine resistance among home health aides?

This is a diffuse work force. A lot of them have had Covid and feel that is protecting them, and some of them who haven’t had Covid feel that if they haven’t gotten Covid yet, they’re not going to.

Some also feel that their patients are protected if the patients are vaccinated. That’s in part a messaging problem. The public messaging on breakthrough infections hasn’t been clear. The message has been that if a person is vaccinated, he or she is safe.

The public health messaging needs to do a better job of making clear that that’s not necessarily so.

There’s a chance of showers this weekend, so try to enjoy today’s partly sunny weather. The temps will again be in the mid-70s.

In effect until Monday (Columbus Day).

Tell us about a New York moment you’ve had recently. Write it down (in 200 words or less)! Then email us at [email protected] or DM us at @NYTMetro on Twitter.

She talks to the trees, and maybe they listen to her

Kamala Sankaram composed an opera for and about trees. Humans are welcome to listen in.

The composition, “The Last Stand,” is billed as “a public sound installation and experimental opera” by the arts organization Creative Time, which chose it from among 400 applications for its Emerging Artist Open Call initiative. The last three performances of “The Last Stand” in Prospect Park — where it has been staged several times a week since mid-September — are scheduled for today, tomorrow and Sunday. (Use the entrance on Ocean Avenue at Lincoln Road and look for a wooded area near the Music Pagoda.)

At just over 10 hours, “The Last Stand” is longer than Wagnerian epics like “Die Meistersinger” and “Parsifal,” which clock in at just under 5 hours 45 minutes apiece at the Metropolitan Opera.

Sankaram — who also wrote the music for “Interstate,” a production that the Minnesota Opera will stream starting on Saturday — said no one had stayed for the full 10 hours. Except for the trees in the park, of course.

Unlike Wagner, who wrote for singers and an orchestra, Sankaram used field recordings that captured sounds like water and wind. One white-throated sparrow makes repeated appearances, and she said there are frogs that sound like a berimbau, the Brazilian instrument with one string and a resonating gourd.

She found her protagonist, a 280-year-old tree, in the Black Rock Forest in the Hudson Valley. She said she talked to researchers about “what might be music for a tree” after she was inspired by the work of Suzanne Simard, a professor of forest ecology at the University of British Columbia. Simard’s research pointed to a kind of communications system — fungal networks that channel water and nutrients from the largest trees in a forest to the seedlings.

But Sankaram opted to record the forest sounds a tree might experience after deciding that she could not mimic those networks without projecting “my own human idea” of what they might sound like.

I believed — as single, lovesick 20-somethings who have read too much Joan Didion tend to do — that there was nothing more New York than getting a drink by myself.

Maybe I would swap intimate stories with a handsome bartender while he mixed me a custom cocktail. Maybe I would lock eyes with another lonely patron who was nursing his own nightcap before heading back to his own empty studio.

So, one balmy Friday night in late August I decided it was time to go out for that solo drink. But where?

My first stop was a new restaurant that had opened on my block, a place that I knew catered to a younger, artsier clientele and served tasty cocktails.

But as I glanced through the window, I saw that almost all of the bar stools were occupied and that most of the people were drinking in pairs. The lone bartender looked harried, and she was buried in her phone. I didn’t even make it to the hostess stand.

The second bar seemed more promising: darker lighting, lively atmosphere, extensive wine list. But to my disappointment, there was already another girl enjoying a nightcap by herself, and she had captured the bartender’s full attention.

Get over yourself, I thought as I headed toward a wine bar around the corner. This time I marched right inside and clambered onto a stool.

The bartender came right over.

I lifted my gaze to match his, ready for my New York fantasy to take off.

N.Y.C. Jail Deaths Climb to 14 as Detainee Is Taken Off Life Support

How Music Festivals Are Moving Forward Despite Delta

Under Fire and Alone, Cuomo Fights for His Political Life
ZİYARETÇİ YORUMLARI