Pandemics Get Forgotten. But Not at This Museum.

A World War II Spy Didn’t Live to Tell Her Tale. Her Great-Great-Niece Will.

‘West Side Story’ Will Not Return to Broadway 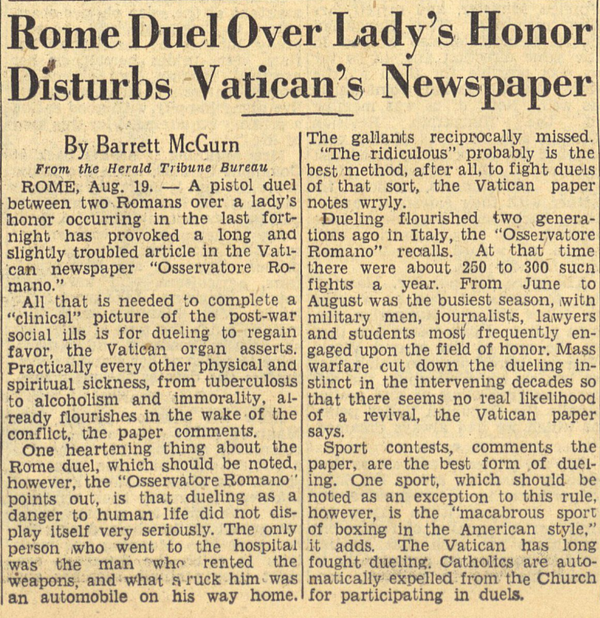 From the Herald Tribune Bureau. ROME, Aug. 19 — A pistol duel between two Romans over a lady’s honor occurring in the last fortnight has provoked a long and slightly troubled article in the Vatican newspaper “Osservatore Romano.”

All that is needed to complete a “clinical” picture of the post-war social ills is for dueling to regain favor, the Vatican organ asserts. Practically every other physical and spiritual sickness, from tuberculosis to alcoholism and immorality, already flourishes in the wake of the conflict, the paper comments.

One heartening thing about the Rome duel, which should be noted, however, the “Osservatore Romano” points out, is that dueling as a danger to human life did not display itself very seriously. The only person who went to the hospital was the man who rented the weapons, and what struck him was an automobile on his way home. The gallants reciprocally missed.

“The ridiculous” probably is the best method, after all, to fight duels of that sort, the Vatican paper notes wryly.

Dueling flourished two generations ago in Italy, the “Osservatore Romano” recalls. At that time there were about 250 to 300 such fights a year. From June to August was the busiest season, with military men, journalists, lawyers and students most frequently engaged upon the field of honor. Mass warfare cut down the dueling instinct in the intervening decades so that there seems no real likelihood of a revival, the Vatican paper says.

Sport contests, comments the paper, are the best form of dueling. One sport, which should be noted as an exception to this rule, however, is the “macabrous sport of boxing in the American style,” it adds. The Vatican has long fought dueling. Catholics are automatically expelled from the Church for participating in duels.

Joe Rogan, a podcasting giant who has been dismissive of vaccination, has Covid.

‘The Suicide Squad’ Review: Train Them! Excite Them! Arm Them!
ZİYARETÇİ YORUMLARI