Tokyo Was Promised Glory and Riches. It Got an Olympics in a Bubble.

A flooded interstate highway in the Bronx in New York City.Credit…Gregg Vigliotti for The New York TimesA powerful storm kills dozens in … 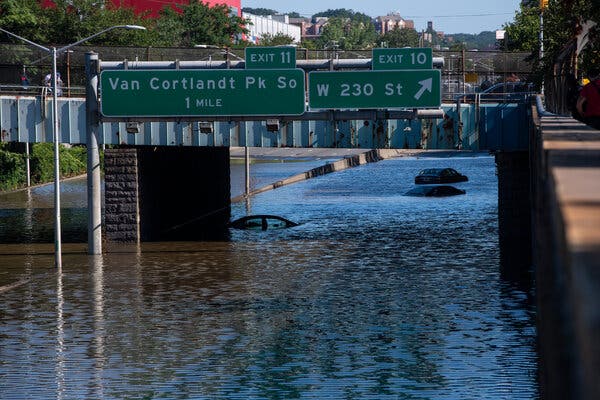 A flooded interstate highway in the Bronx in New York City.Credit…Gregg Vigliotti for The New York Times

The remnants of Hurricane Ida killed at least 43 people in New York, New Jersey, Pennsylvania and Connecticut and left more than 150,000 homes without power. States of emergency were still in effect as of midday yesterday, as officials sought to get a handle on the damage. Here are the latest updates and photos from the storm.

At least 11 people were found dead in basement apartments in New York City. These residences are often illegal and lack basic safety features, like more than one way to get out — but for many immigrants, they are a vital source of shelter.

Speaking from the White House, President Biden said the damage showed that “extreme storms and the climate crisis are here,” constituting what he called “one of the great challenges of our time.” Overlapping disasters in the U.S. have laid bare a stark truth: The country is not ready for the extreme weather brought by climate change.

Details: Central Park recorded more than three inches, or about eight centimeters, of rain in a single hour on Wednesday night, smashing previous records. The downpour paralyzed the city, with cascades of water pouring into subway stations and shutting down much of the system for hours.

Members of the Taliban at the Kabul airport on Thursday, driving past a billboard with former President Ashraf Ghani’s image.Credit…Jim Huylebroek for The New York Times

How will the Taliban govern?

As Taliban commanders exchange their guns for the reins of power, some 38 million Afghans can do little but hold their breath and wait to see how their latest conquerors will rule.

History may offer a few clues. Around the world, rebel takeovers have often shared certain traits: a tightly bureaucratic authoritarianism; a focus on controlling elements of society seen as tied to the old order; and a quest for foreign recognition — all in the pursuit of consolidating authority.

Financially, the Taliban face a crisis. The group has long used underground banks and opium to fund their insurgency. Fixing Afghanistan’s problems will require a lot more than that.

Quotable: At a protest on the streets of Herat, a western city, women called for more rights and inclusion in the Taliban-led government. “Don’t be afraid,” they chanted. “We are all together.”

Airlift: A group of Afghans who worked for The Times, along with their families, have reached the U.S.

With the highly contagious Delta variant spreading, several European countries have begun or will start giving booster shots this month to people who have already been fully vaccinated against the coronavirus.

While an E.U. drug regulator has said that fully vaccinated, healthy people do not urgently need booster shots, France, Germany and the Czech Republic have all strongly recommended the additional shot for people over 60. In Britain, a third dose will be offered “as soon as possible” to people with severely compromised immune systems, the health secretary said.

The U.S. plans to begin administering the third shots once federal regulators have approved them, which could happen in the coming weeks. But many in the country have yet to receive their first shots: Nearly 10 million older people are without full immunization, and no vaccine has yet been authorized for children under 12.

Expert opinion: Despite the flurry of booster programs in wealthier nations, the science of whether they are needed is not yet clear. Scientists generally agree that a third shot is warranted for those with compromised immune systems.

News From The U.S.

What Else is Happening

Confidential documents show a concerted effort made by people close to Carles Puigdemont, above, the self-exiled former Catalan president, to cultivate ties to Russians connected to their country’s intelligence establishment. They sought to secure Russia’s help in severing Catalonia from the rest of Spain, according to a European intelligence report.

Fermi Problems are named after the Italian physicist Enrico Fermi, who had an uncanny knack for making spot-on approximations with little actual data on hand, writes Caroline Chen in this Letter of Recommendation.

One of the most famous examples is: How many piano tuners are there in Chicago?

Without looking, let’s assume that Chicago’s population is somewhere between one and five million people. Using 2.5 million to start, and assuming an average household has four people, we would have 625,000 households.

Say one out of five households has a piano; that gets us to about 125,000 pianos. Let’s say they all get tuned once a year. And let’s also suppose each piano tuner can tune three pianos a day. Multiply by five days a week, for 50 weeks a year, and that comes out to about 750 pianos per tuner per year. Divide the number of pianos (125,000) by 750, and we get roughly 170 tuners across Chicago.

The goal here isn’t knowing the exact number but rather being able to estimate the right order of magnitude using nothing but common sense. Contemplating problems like these can help keep us curious about the world and how things relate to one another.

The large amount of key lime juice in this pie guarantees a tart, impressive flavor.

“Intellectual 20-somethings discussing their vexed feelings for one another is a road made mostly of potholes,” our reviewer writes of Sally Rooney’s new novel. “Rooney avoids almost all of them.”

Here’s today’s Mini Crossword, and a clue: It’s below CVBNM, on a keyboard (five letters).

That’s it for today’s briefing. Have a great weekend. — Natasha

The latest episode of “The Daily” is about the aftermath of Hurricane Ida in New Orleans.

A powerful storm called Evert is expected to bring more wild weather to the U.K.

A Cabaret Star and an Opera Star Walk Onto a Stage …

Europe Reopened to Americans. Why, It Asks, Hasn’t the U.S. Reciprocated?