As Bang on a Can Returns, a New Generation Rises

Where Home Blends With Community

The stories in Wes Anderson’s “The French Dispatch” take place in the fictional town of Ennui-sur-Blasé. Léa Seydoux — who plays a prison guard …

The stories in Wes Anderson’s “The French Dispatch” take place in the fictional town of Ennui-sur-Blasé. Léa Seydoux — who plays a prison guard who models for an inmate — finds the name hilarious.

“It’s so great! It’s exactly the image that an American can have of the French: they are just so bored,” Seydoux said with a laugh.

This year has been anything but boring for the actress. The long-awaited Anderson picture follows the equally long-awaited juggernaut, “No Time to Die,” starring Seydoux as Madeleine Swann opposite the outgoing Bondsman Daniel Craig. “The French Dispatch” screened last week in the New York Film Festival and premiered last summer at Cannes, alongside three other Seydoux-starring films: Arnaud Desplechin’s Philip Roth adaptation, “Deception”; Ildiko Enyedi’s period piece, “The Story of My Wife”; and Bruno Dumont’s satirical drama “France.”

The wild array makes it hard to have a single image of Seydoux herself.

The 36-year-old actress first broke through in art-house circles in 2008 with the French student-teacher romance “La Belle Personne.” She shared the Palme d’Or in 2013 at Cannes for the explicit “Blue Is the Warmest Color,” with her director, Abdellatif Kechiche, and co-star, Adèle Exarchopoulos. “Spectre” in 2015 brought her into the Bond franchise, following a “Mission: Impossible” installment.

Admirers took note of Seydoux’s seductive, quietly radiant hold on the screen. “Léa Seydoux is always a captivating actress,” Stephanie Zacharek wrote in The Village Voice. The New York Times review of “Diary of a Chambermaid” said that she held her own “in a lineage of actresses” including Jeanne Moreau and Paulette Goddard. “The antithesis of the ‘Bond’ Girl,” the critic Christina Newland declared in her review of “No Time to Die.” 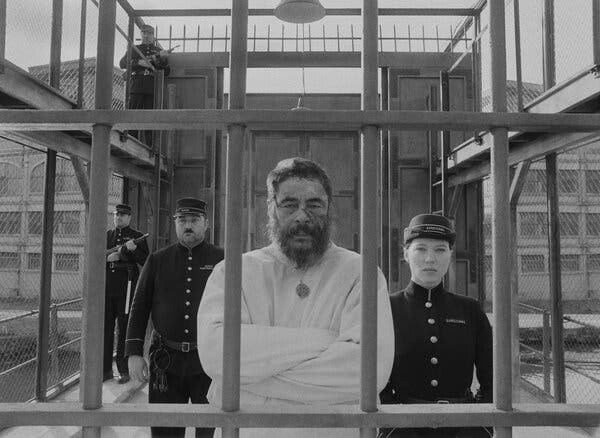 In the Bruno Dumont’s satirical drama “France.”Credit…R. Arpajou, via Kino Lorber
With Daniel Craig in “No Time to Die.”Credit…Nicola Dove/MGM

Despite her sometimes imposing roles, Seydoux in conversation marches to the beat of her own drummer. At a Midtown boutique hotel, she paused frequently, at times trailing off into silence, yet she beamed with affability and curiosity. Her first comments weren’t about Bond, or “Wes,” but rather the existential critique in Dumont’s “France.”

“She knows she’s part of the capitalistic system,” Seydoux mused about her character, France de Meurs, a TV journalist in crisis. “And she wants that — that was her ambition. But she’s conscious of the fact that she’s also a tool of the system. And she’s conscious of her own alienation.”

This was not what I expected to hear in the “Bond bubble,” as her publicist referred to the film’s press operation at the hotel. But Seydoux freely shifted from Bond talking points to off-handed analysis of her roles.

“When I played Madeleine, I was ‘first degree’: There was no distance, there was no irony. My positioning as an actor is something that I really love,” Seydoux said. By contrast, “in the Dumont, the subject is the philosophical dimension.”

When I asked Dumont about her performance, he put it simply: “Léa Seydoux brought Léa Seydoux! I liked how natural she was. I was interested in working with her nature to build an artificial character.” (“France,” also a New York Film Festival selection, opens in December.)

In “The French Dispatch” (arriving Oct. 22), Seydoux plays a caretaker and lover to a great incarcerated artist, Moses (Benicio Del Toro). Her briskness and wit keep up the comic tempo.

“The rhythm, the body language, the way you move — Wes understands you can’t move in a normal way. Everything has to be tch-tch-tch-tch,” Seydoux said.

Anderson offered her the part in a cellphone text, which she read aloud to me: “The movie is sort of a collection of short stories. So I will send you just the parts that you need to read …” About her character’s get-it-done pace, she says with a laugh: “I think I’m actually like that!”

“When I played Madeleine, I was ‘first degree’: there was no distance, there was no irony,” Seydoux said about her role in the James Bond films.Credit…Jingyu Lin for The New York Times

Seydoux grew up in Paris with a father in business and a mother who is an artist and curator. Her grandfather acquired the storied French film studio Pathé, which dates back to the beginning of cinema, but she says they were not close.

“It was bohemian but not a happy bohemian family. I was very sad as a kid,” Seydoux said. “I really suffered from the fact that I was different. I had trouble reading.” In past interviews, the actress has described a very shy childhood of being “completely in my own world.”

To Seydoux, her breakthrough, “La Belle Personne,” felt like having her “first family in a way,” she said. Making films gave her a sense of purpose: “What I like is to feel needed, and I like to share with people. It connects me to the world.”

There’s no mistaking Seydoux’s core of determination in her career. Other actors might have wobbled after the grueling process of making “Blue Is the Warmest Color.” The notorious shoot involved repetitive takes of lengthy sex scenes and, she told me, Kechiche’s numerous threats to fire her. Public disagreements followed.

She said proudly that she would do it again. But she did realize something about choosing directors.

“I don’t need to suffer to give the best of myself,” she said.

Seydoux isn’t shying away from new adventurous roles. She just filmed David Cronenberg’s “Crimes of the Future,” with Viggo Mortensen and Kristen Stewart. The plot? “It’s a dystopian future where people eat plastic. They have organs growing. And I’m a surgeon. I remove these organs.”

Next is a family drama, Mia Hansen-Love’s “One Fine Day,” which she partly shot over the summer, before acquiring a Covid-19 infection on set. Seydoux had to skip Cannes and quarantine in Paris (where she lives with her partner and their toddler daughter). Her character is a single mother caring for her ailing father and finding love.

At one point, the range of her roles reminded me of a playwright’s quote about choosing subject matter: “Nothing that is human is foreign to me.” Liking the line, Seydoux hands me her phone and asks me to type it in.

Then she quirkily doubles back for a joke.

In Debate Over Conquistadors 500 Years Ago, Spanish Right Sees an Opportunity

A Global Tax Deal Is at Hand. Here’s How It Would Work.