How a Rockaways Locations Rep Spends Her Sundays

How One Principal Got Students Back to a Bronx Public School

2 Months of Rain in a Day and a Half: New York City Sets Records
Anasayfa » Manşet » They Put Everything Into Their Homes. Not One Was Spared in the Flood.

They Put Everything Into Their Homes. Not One Was Spared in the Flood.

The record rainfall from Hurricane Ida appeared to damage every home on one block in Queens, where some families had lived for decades. By …

The record rainfall from Hurricane Ida appeared to damage every home on one block in Queens, where some families had lived for decades.

The sun beat down on homeowners along 153rd Street in Queens as they hauled waterlogged bags of rubbish out to the curb and placed them alongside heaps of splintered tables, stained mattresses and other vestiges of their lives before the flood.

It was less than 48 hours after the remnants of Hurricane Ida swept through New York City, bringing rushing water that had risen to over six feet, engulfing basements and sluicing through upper floors. Neighbors on the block in Flushing — a stretch surrounded by Kissena Park — had fallen into a quiet, steady rhythm of removing their most treasured belongings and tossing them into the trash on Friday.

Marco Velasco, 51, leafed through a soaked, leather-bound Bible, a present his wife received when the couple purchased their home in 2006. 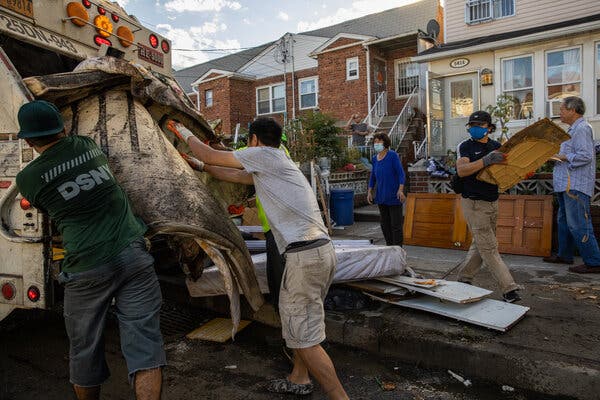 Every house on this block of 153rd Street in Flushing, Queens, suffered significant damage. Sanitation workers hauled away mattresses and other belongings.

The record rainfall throughout the Northeast on Wednesday left more than 40 people dead in four states. The toll was especially hard on New Jersey, where at least 25 people died — a third of them in their cars — and on this swath of Queens, which accounted for the majority of New York City’s 13 deaths. President Biden was scheduled to visit Queens and Manville, New Jersey, on Tuesday, the White House announced on Saturday.

In Queens, people cried for help, unable to escape as their basement apartments filled up with water. The dead included three people who lived in a basement apartment on Peck Avenue, around the corner from 153rd Street.

Many of the residents who survived the nighttime torrent have been left with little to nothing. Sanitation crews said the storm appeared to hit every single home on this block of 153rd Street.

The area, about half a mile from the Long Island Expressway, has attracted families with roots in various parts of the world, from China to Italy to Ecuador. On Friday, most residents spoke quietly to one another in Mandarin, Spanish or English as they worked to clear out the wreckage.

Many families had poured everything they had into buying or maintaining their homes, now ravaged by the storm. The neighborhood and others nearby in Queens are some of the few remaining areas of the city where middle-class New Yorkers can still afford to own a home. But in this close-knit community on 153rd Street, families wondered whether they could ever manage to replace what Ida’s surging waters stripped from them in a single night.

Jackson Sun swept water and debris from his home on 153rd Street in Queens.
A family dried out their belongings in their backyard.

“This was our first house,” said Joanna Velasco, Mr. Velasco’s wife, as she looked around the bones of her basement, where exposed electrical cords dangled from the ceiling. “Now we don’t know if we’re going to come back.”

The couple had spent well over $100,000 over 15 years to repair and beautify the place for their three sons, and later their three grandchildren. The Velascos had installed wood floors, painted the walls and replaced old appliances — a hefty financial investment that was washed away in a matter of moments.

“It was a lot of money,” said Ms. Velasco, 49. “I think about everything we did, everything for our kids.”

A manicurist, Ms. Velasco has been unemployed during the pandemic; Mr. Velasco works as an upholsterer.

“Where are we going to go?” she asked, shaking her head as she surveyed her living room, where several sopping wet photo albums with baby pictures of their sons lay nearby. “We don’t have clothes, we have nothing. We have no answers.”

A few doors down, Sunciya Vijayarajah stood on her stoop near piles of her children’s school papers, sodden bags of basmati rice and a large statue of an elephant, which had floated halfway down the block and required four men to retrieve.

“My daughter now has one dress. Just one dress,” said Ms. Vijayarajah, 42, as she sorted through damp clothes while members of her family continued to carry bags, bins and pieces of furniture out of the house. Ms. Vijayarajah, a homemaker, and her husband, Vijay Thangarajah, who works in construction, have three children, Vinecaiya, 17, Vinoja, 14, and Vanson, 9.

One of the few items that remained after the deluge was a framed snapshot of a beaming Ms. Vijayarajah next to Mr. Thangarajah, taken on their wedding day in 1998 in Sri Lanka, three years before the couple moved to the United States. Ms. Vijayarajah, then just 19 years old, her hair pulled back in an updo, wore a regal red and green sari with gold embellishments.

“My wedding sari is gone” said Ms. Vijayarajah as tears began to roll down her cheeks.

Five years ago, she moved her parents — Reetamma Thevathas and Thevathas Madutheen, both 67 — to Queens from Sri Lanka so that they would have a “good life.”

The older couple, standing near her on the stoop, wept as their daughter spoke. “Our dreams are lost,” Ms. Vijayarajah said.

Across the street, Joey Ferraro, 27, sat on the trunk of his black sedan, one of the dozens of vehicles on the block that were partially submerged for hours before the water receded.

The sedan was parked in the driveway of a red brick house, the home that has been in the Ferraro family since 1955. Mr. Ferraro and his older brother, Michael Ferraro, grew up in the house just like their late father. Michael Ferraro has a 1-year-old daughter, marking the fifth generation of the family to live there.

The brothers — Michael works as a barista at Starbucks and Joey works as a glazier — said they had spent about $120,000 in renovations that they completed in February 2020. On Friday, the once pristine home, with its white shaker cabinets and white marble tile, was caked in a layer of dark sludge. On the bathroom floor lay a muddied cross made of dried palm leaves.

Joey Ferraro and his mother Dana Ferraro reflected on the damage to the home that has been in the Ferraro family for five generations.
Joey Ferraro and his older brother said they had spent about $120,000 in renovations that they completed in February 2020.

Only a few items from the first floor of the house could be salvaged: a small white christening coat that both brothers wore as babies; the ashes of Joey Ferraro’s pit bull, Spanky; and a ceramic 1974 blue, white and gold beer stein from Delehanty High School, their father’s alma mater.

“We’re the last two left,” he added. “I’m the sentimental one. But I don’t want to stay for that reason. So the question is: Do we want to stay, or do we want to go somewhere else and start brand new?”

As the sun began to wane, Marco and Joanna Velasco headed to the Anchor Inn in Bayside, Queens, where their two sons, Allen, 22, and Matthew, 12, were waiting in a small room that the American Red Cross had reserved for them. Mr. Velasco’s 80-year-old mother, Nelly Velasco, sat in the back seat of their SUV.

Ms. Velasco spoke her worries aloud: When would the gas be turned back on? Would the second plumber they hired be able to make the necessary fixes the first could not? Could they save their boiler, or would they have to dole out $1,700 to replace it? Would the insurance cover the damage? How would they pay the bills if it didn’t?

After pulling into the hotel parking lot, the Velascos crossed the street to pick up several bags of soda, roast chicken, rice, and macaroni and cheese. Then they settled into the room.

Ms. Velasco sat on one of the two queen beds, her hands folded in her lap, tired from two days of cleaning out the home they had worked so hard to build.

“At least we have food,” Ms. Velasco said with a sigh, before lifting her head and smiling at her sons. “Not everyone can afford to buy chicken.”

How a Publishing Executive Spends Her Sundays