Need a Little Sunshine? This Weeknight Fish Has It in Spades.

A Weeknight Pasta That Finds Freedom in the Familiar

Breaking Down the ‘Wellness-Industrial Complex,’ an Episode at a Time

It’s the Season for Cider. Here’s How to Drink It.

How Black Foragers Find Freedom in the Natural World

14 Vegetarian Soups and Stews for a Cozy Fall

Mortars, Pestles and the Comfort of a Culinary Ritual

One Baker’s Quest to Make Bread That Blurs Borders

TUCSON, Ariz. — The July sun was barely up, but the heat was already inching well above comfortable. Don Guerra seemed unfazed, though, as if the …

TUCSON, Ariz. — The July sun was barely up, but the heat was already inching well above comfortable. Don Guerra seemed unfazed, though, as if the desert had long ago settled in his bones. He had been moving briskly since 4 a.m. to the clanking soundtrack of an integrated loader, the stiff canvas conveyor belt that sends raw torpedoes of pain au levain onto the decks of his four-level oven at Barrio Bread.

Mr. Guerra, 51, shook flour thickly over the surface of purplish-gray dough before reaching for a plastic stencil: an image of wheat spears bobbing before a saguaro cactus. “One of my absolute favorites,” he said of the loaf, which he calls the Locavore. Once it’s finished, it has the lush smell of malt and a sharp whiff of sour. It contains three types of wheat (all grown in southern Arizona), including White Sonora, which Mr. Guerra has helped revive.

Bringing that heirloom variety back into use was purposeful. Because although Mr. Guerra still uses the vocabulary and traditions of French and Italian bread baking, he has managed something radical. Baking exclusively with grains grown in southern Arizona, Mr. Guerra has traced wheat to its deepest roots in North America: the stretch of the Sonoran Desert that includes Tucson and that dips below the U.S.-Mexico border to the fields where Spanish missionaries are believed to have introduced the grain in the mid-1600s.

Moreover, in a craft baking industry that skews overwhelmingly white, and in a nation where the iconography of wheat seems etched into the amber waves of the Great Plains, Mr. Guerra is — gently, and with a smile — challenging the culture.

Black, Indigenous and other people of color are often marginalized in the baking community, said Mr. Guerra, but for him, baking is integral to his identity.

“The bread is ultimately who I am,” he said. 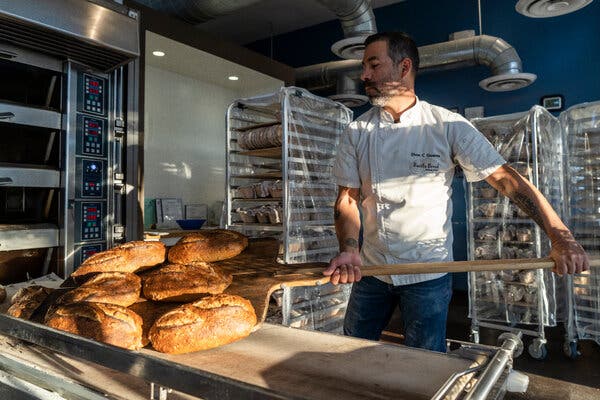 The dimensions of the prep area at Barrio Bread closely mirror those of the two-car garage in which Mr. Guerra operated the bakery for eight years.Credit…Rebecca Noble for The New York Times

His efforts have become a source of inspiration for other bakers. At Gusto Bread in Long Beach, Calif., Arturo Enciso favors Spanish terms for baking. He calls his sourdough starter masa madre, or mother dough, and his baguettes huesos, or bones. Mr. Enciso, whose parents are from Mexico, began in what he calls a classical mode, baking the pain au levain he gleaned from French tradition. Now he is recasting artisanal baking in a way that centers a Latin identity. Mr. Enciso’s California loaf, made with state-grown grain, was directly inspired by Barrio’s Heritage loaf.

“Bringing more meaning to the product, and bringing forward a baking philosophy — Don was one of the early guys I saw doing that,” Mr. Enciso said.

Bryan Ford is the author of “New World Sourdough,” a cookbook published last year that looks at craft baking through the lens of Latin America. Mr. Ford, whose heritage is Afro-Honduran, said he sensed in these shifts the beginnings of a movement.

“Whether it’s someone like Don,” he said, “who’s dealing with the grains and tapping into the grain culture to explore this idea, it’s nice to see more bakers with these roots, whether it’s Mexican or Central American or South American.” It’s important that these artisans go back to “utilizing grains in ways that highlight our culture,” he added.

In Tucson, a city better known for flour tortillas than levain, Mr. Guerra is a star of the local-grain movement. Lots of craft bakers talk about growing local-grain economies, using grains harvested and milled a relatively short distance from their ovens — the locavore ethos applied to baking. Mr. Guerra has been doing it for years, working with southern Arizona grain growers, the Indigenous San Xavier Cooperative Farm and other groups.

One of his first obsessions was White Sonora wheat. According to the nonprofit Slow Food USA, the grain is believed to have been planted first by the Opata people in an area less than 50 miles from Magdalena de Kino, the city in Sonora, Mexico, where Mr. Guerra traces his family’s Latin and Yaqui tribal roots. (“This is going back,” he said. “This is real.”) While White Sonora was the dominant variety in the Western United States for much of the 19th century, it was commercially dead by the 1980s.

In 2014, Mr. Guerra joined a campaign to revive the grain led by Native Seeds/Search, a seed bank in Tucson whose offerings are collected from the Southwest region. Mr. Guerra helped persuade Arizona growers like BKW Farms to give it a chance by promising to buy part of the harvest for Barrio Bread.

“It was people going to the Sonoran region,” he said, “and talking to these small-scale farmers in these valleys making tortillas with it, and saying, ‘Hey, can I get a couple Mason jars full of seed?’”

White Sonora wheat has been grown in the Sonoran region since the 17th century. Mr. Guerra, who has Mexican and Yaqui tribal roots, helped revive the grain. Credit…Rebecca Noble for The New York Times

Mr. Guerra was born in 1970 in Tempe, just east of Phoenix. His father, Bennie, was a barber; his mother, Denise, who has Irish roots, worked in the home. “There was not a lot of money,” Mr. Guerra said. “But there was flour.” His mother baked breads, cookies, pies. His grandmother on his father’s side had a special touch for making flour tortillas.

Mr. Guerra’s parents encouraged assimilation. His father would recall a whites-only public swimming pool in Tempe in the 1960s, with signs barring Mexican Americans. “For me growing up, it was like, ‘Don’t speak Spanish out in the community because people will know you’re Mexican,’” Mr. Guerra said. He calls his embrace of his heritage particularly liberating because of that history of caution.

At 8, Mr. Guerra started a shoeshine business in Bennie’s barbershop; by 16, he says, he was managing a diner. A few years later — he doesn’t remember how many — Mr. Guerra discovered bread. “I had so much hustle behind me,” he recalled, “I just needed that product I was totally passionate about. All of a sudden it was like, bread and bakery — this is my jam now.”

He picked up basic techniques at the Arizona Bread Company in North Scottsdale, and learned to write a business plan through a community college program.

In 1996, Mr. Guerra opened his first bakery, the Village Baker, in Flagstaff. He opened a second branch in Ashland, Ore., a few years later. The bread and pastry menus were huge — Mr. Guerra felt perennially exhausted. He sold the business and moved to Tucson in 2000 with his wife, Jen. Thinking he’d pursue a more stable career, he enrolled at the University of Arizona, where he earned a teaching degree.

After seven years teaching math and coaching sports at a public elementary school, Mr. Guerra went back to bread. In 2009 he turned his two-car garage into a production kitchen. His former colleagues were among his first customers: He sold bread to teachers, hawked loaves on Shopify and generated lines at farmers’ markets. He called his business a C.S.B. (community-supported bakery), adopting its name from Barrio Del Este, the Tucson neighborhood where his garage soon began to glow and hum long before the sun came up.

Mr. Guerra at Barrio Bread this month with two staff members, Tanya Burr and Crystal Smith. “There was not a lot of money,” he said of his childhood in Tempe, Ariz. “But there was flour.”Credit…Rebecca Noble for The New York Times

“Sometimes I’m like, ‘Wow, I birthed this thing out of my garage,’” Mr. Guerra said, laughing. “Look how many cool things came out of garages: Steve Jobs, the Ramones. In other places — for example, Mexico — man, you’re a legend if you can kit your house out and you have a little storefront on the side. That person is really respected.”

In 2016, after eight years in the garage, Mr. Guerra opened his current location in a small 1960s-era shopping mall. The prep area is almost exactly the same size as his old garage; the dimensions make him feel most like himself, he said.

Mr. Guerra and his wife separated three years ago, in part because of disagreements over his early hours and a punishing workload. (She is still the co-owner of Barrio Bread and manages its human resources and its finances.) This year, Mr. Guerra oversaw the opening of Barrio Charro, a daytime spot in Tucson that serves sandwiches and baked goods, a collaboration with the Si Charro! restaurant group. And he started Barrio Grains, a packaged line of the whole grains and flour mixes that go into Barrio’s breads, produced by Hayden Flour Mills of Queen Creek, Ariz.

Mr. Guerra also has a new obsession. He is figuring out how to get a 50-pound sack of organic heritage wheat north across the border at Nogales, in Arizona. He has reached out to small farmers in Sonora, including Jose Luis Lámbarri, a farmer near Ciudad Obregón, 400 miles south of Tucson. Mr. Lámbarri grows Yaqui-50, a soft wheat reputed to taste sweet and nutty.

Despite encountering countless bureaucratic hurdles, Mr. Guerra seemed energized, buzzing with hope about the prospect of getting his hands on it, grinding it in his tabletop mill, mixing it into his doughs.

“Crossing borders, feeding this grain to my people in the form of bread,” he said. “To me, that’s power.”

Mortars, Pestles and the Comfort of a Culinary Ritual

Where the Grits Shimmer with Vegan Butter