Britney Spears’s Father Fights Effort to Remove Him as Conservator

‘Jesus Christ Superstar’ at 50: What Was the Buzz?

The Best and Worst Moments of the 2021 Emmys

Supported by Continue reading the main storyMet Opera Reaches Deal With Orchestra, Paving Way for Reopening The labor deal means that the …

The labor deal means that the company, the largest performing arts organization in the nation, is on track to reopen next month after the pandemic kept it closed for more than a year. 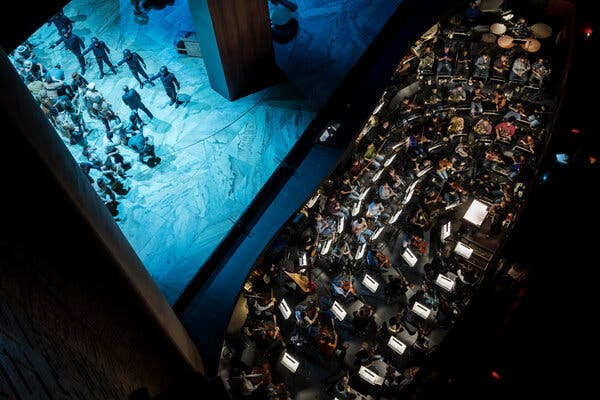 The Metropolitan Opera reached a labor deal with the musicians in its orchestra, paving the way for their return to the pit and the company’s reopening next month. Credit…Karsten Moran for The New York Times

The Metropolitan Opera has struck a labor deal with its orchestra, officials announced Tuesday, paving the way for its musicians to return to work and for the company, the largest performing arts organization in the nation, to resume performances next month after being shut down for more than a year by the pandemic.

After months of uncertainty, and talks that grew contentious at times, the Met said that the players had ratified a labor deal reached with the union representing the orchestra, Local 802 of the American Federation of Musicians. Details of the deal, a four-year contract, were not provided. The musicians were scheduled to return to work on Monday for their first official rehearsal since the pandemic closed the opera house in March 2020.

The agreement concludes several months of tension over how significant future pay cuts would be for musicians, who went for nearly a year without pay during the pandemic.

“The members of the Met’s great orchestra have been through Herculean challenges during the 16 months of the shutdown, as we struggled to keep the company intact,” Peter Gelb, the Met’s general manager, said in a statement. “Now, we look forward to rebuilding and returning to action.”

The group was the last of the three major Met unions to come to an agreement; without a deal on a new contract for the orchestra, the Met would have likely had to postpone its reopening. Several smaller unions have yet to reach deals.

In a joint statement, Adam Krauthamer, the president of Local 802, and the members of the Met’s orchestra committee said that they were “thrilled to be returning to regular performances very soon, and look forward to reconnecting with our audiences.”

Citing the staggering revenue losses from the pandemic, and the uncertainty over when its box office and donations would rebound, the Met had been seeking to cut the payroll costs for its highest-paid unions by 30 percent, saying that the change in take-home pay would be more like 20 percent. It had offered to restore half of the cuts when ticket revenues and core donations returned to their prepandemic levels.

The first of the unions to reach an agreement, the American Guild of Musical Artists — which represents chorus members, soloists, dancers and stage managers, among others — secured salary cuts that fell far short of the management proposal; under the agreement most types of employees in the union will initially see 3.7 percent cuts to their pay. But that deal saved the Met money, moving the members from the Met’s health insurance plan to the union’s, and by reducing the size of the full-time regular chorus.

That contract was expected to set the pattern for the level of savings expected in deals with other two major unions, which represent the Met’s stagehands and its orchestra. A provision in the guild’s deal stated that if the other unions struck more favorable deals, the guild’s contract would be adjusted to be brought in line with them.

Along with the news of the deal with the orchestra, the Met announced that the orchestra and chorus would give two free performances of Mahler’s Symphony No. 2, “Resurrection,” in Damrosch Park at Lincoln Center on Sept. 4 and 5, conducted by the Met’s music director, Yannick Nézet-Séguin, and featuring the soprano Ying Fang and mezzo-soprano Denyce Graves as soloists. (It also announced a new annual chamber music series of six concerts at Carnegie Hall’s Weill Recital Hall.)

The Met will give its first performance back at the opera house on Sept. 11 with a special concert of Verdi’s Requiem, to mark the 20th anniversary of the attacks. The concert will be broadcast live on PBS, hosted by the ballet star Misty Copeland.

The Met’s season is scheduled to open on Sept. 27 with Terence Blanchard’s “Fire Shut Up in My Bones,” the first time the Met is mounting an opera by a Black composer.

‘Sex Education’ Gets More Inclusive in Its Intimacy

The U.S. will open the Canada and Mexico borders for fully vaccinated travelers.

Rosie Perez Hates Flying, but She Soared in ‘The Flight Attendant’