YouTube suspends Rand Paul for a week over a video disputing the effectiveness of masks.

The Sheikh, the Businessman and a Hacking Mystery on 3 Continents

A Filmmaking Life Gets a Sequel

Brazilian senators vote to seek 9 criminal charges against Bolsonaro.
Anasayfa » Güncel » At MoMA, Love of Cars Can Be Exhausting

At MoMA, Love of Cars Can Be Exhausting

In 1974 Andy Warhol bought himself a two-tone Rolls-Royce Silver Shadow — brown roof, black doors — custom-ordered from London. It didn’t matter that Warhol had no driver’s license. For some a car is more than a vehicle, and in “Automania,” the Museum of Modern Art’s engine-revving summer show, the automobile appears as an art object all its own.

MoMA has collected industrial and commercial objects since the 1930s, and its department of architecture and design now owns nine cars, ranging from sexy to stolid. All are on display in “Automania.” (There’s also an Airstream trailer, for slower travels.)

Three automobiles, testifying to MoMA’s hardy freight elevator and sturdy flooring, have ascended to the museum’s third-floor galleries: a pistachio Volkswagen Beetle from 1959, a nearly seamless Cisitalia 202 GT in rosso corsa red, and a midnight-blue Jaguar E-Type Roadster from 1963. They appear along with a cross-section of art and automotive ephemera from the collection: road signs, fabric swatches, ad campaigns, and photography of both the open road and the traffic-choked city. 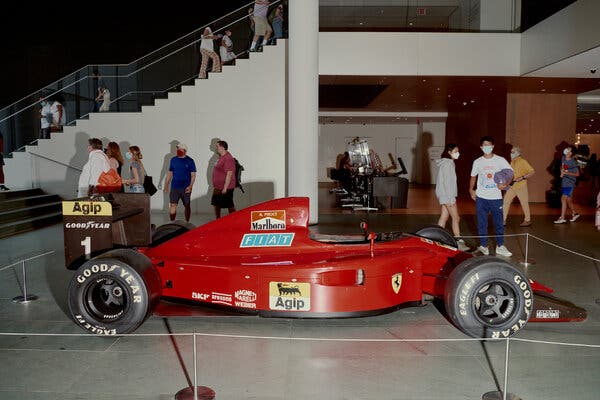 Looking at the Ferrari Formula 1 Racing Car (641/2), made in 1990, at “Automania” in the lobby.Credit…Vincent Tullo for The New York Times

Downstairs, in the lobby, is another red Italian ride: a low-slung Ferrari Formula 1, capable of hitting 215 miles per hour on the track in Monte Carlo or, these days, Abu Dhabi. And in MoMA’s sculpture garden, squatting in Calder’s and Picasso’s usual parking spots, is a quintet of automotive classics: a Porsche 911, a Fiat 500, a Citroën DS, a military-grade Jeep, and, last in size but first in fuel efficiency, an eight-foot Smart Car. I’d assumed that MoMA’s install team just drove the cars inside, but in fact the automobiles were airlifted into the sculpture garden, hovering over West 54th Street like Christ helicoptering over Rome at the start of “La Dolce Vita.”

Parked on Yoshio Taniguchi’s marble porch, protected by cables, each of these five outdoor cars takes on the haughty authority of modern sculpture. The burgundy DS, with its space-age silhouette and directional headlights that follow the turning of the wheel, has curves as gentle as a Maillol river nymph. The boxy Smart Car looks almost like a Donald Judd specific object. Me, I take the subway — and all the way in the back of the garden, next to the Jeep, Hector Guimard’s circa-1900 entrance to the Paris Métro lurks like a forsaken urban alternative.

The Citroën DS 23 sedan was designed 1954-1967 by Flaminio Bertoni, André Lefèbvre, Paul Magès and Robert Opron  in MoMA’s sculpture garden. This example is from 1973.Credit…Vincent Tullo for The New York Times
The exhibition “Ten Automobiles” in 1953 at MoMA. It’s harder to think about cars as objects of beauty now than it was in the 1950s, when MoMA mounted two popular shows of automobiles.Credit…Museum of Modern Art Archives

The curators of “Automania” — Juliet Kinchin, who recently retired from MoMA, and her design department colleagues Paul Galloway and Andrew Gardner — have brought out collection objects that limn the car as dream machine and traffic nightmare. The earliest is an 1898 lithograph by Toulouse-Lautrec of a driver in fur coat and goggles, piloting a car with a horizontal steering wheel. The funniest, or maybe darkest, is “Automania 2000,” a 1963 short by the British animators Halas and Batchelor that ends with motorcars spontaneously regenerating until the whole world is a parking lot.

Ed Ruscha, bard of the Los Angeles freeway, is accounted for through his accordion-fold book “Every Building on the Sunset Strip” (1966). Vern Blosum, one of the most mysterious (and possibly fictional) Pop artists, bobs up with a deadpan painting of a parking meter, complete with the fatalistic caption “TIME EXPIRED.”

Emerging automania: Driving created opportunities to make a fashion statement. In 1898, Henri de Toulouse-Lautrec depicted his fur-coated cousin as a Parisian modiste in the lithograph “The Automobile Driver (L’Automobiliste),” leaving a trail of dust and fumes in his wake.Credit…Museum of Modern Art
In the ’60s, the breezy optimism of technological progress promoted by the industry fell out of step. The Pop artist Vern Blosum wryly titled his 1962 photo-realist painting of a parking meter, “Time Expired.”Credit…Vern Blosum Estate and Museum of Modern Art
A 1948 Pininfarina Cisitalia 202 GT Car on display at MoMA. It was the first automobile the museum acquired, in 1972.Credit…Vincent Tullo for The New York Times

Of course it’s the cars that are the main attraction of “Automania.” Although, in a week when the Intergovernmental Panel on Climate Change confirmed that “warming from anthropogenic emissions from the pre-industrial period to the present will persist for centuries to millennia,” a show devoted to the personal motorcar feels a bit like one devoted to lethal poisons.

MoMA was already thinking about automobiles’ environmental impact in 1999, the last time cars rolled into its sculpture garden. That display included several electric and hybrid cars, including the Toyota Prius, then big in Japan, and the now legendary GM EV1: the first mass-produced battery-powered passenger car, eventually discontinued and demolished. (MoMA doesn’t own any electric cars; perhaps a board member wants to donate a used Tesla and take the tax writeoff?)

A 1965 Porsche 911 Coupe designed by F.A. “Butzi” Porsche entered the collection in 2017.Credit…Vincent Tullo for The New York Times

If you were a road-shy formalist, and asked me to assess these cars for their curves and their style alone, the most beautiful object in “Automania” is the red Cisitalia 202. It’s the first automobile MoMA acquired, and this commercial venture from the Italian race-car manufacturer is almost artisanal, with gently swelling panels formed by a single craftsman around a single aluminum shell. Like all great sculptures, it’s also totally impractical; the 202’s handmade body made production costs too high, and only 170 examples were ever manufactured.

If you’d asked me which I’d most like to take for a spin, I wouldn’t say no to the Jag but I think I’d rather have the little Fiat Cinquecento: just enough Italian style to impress the passers-by in Midtown, but small enough to park between restaurant plywood sheds.

The Fiat 500f City Car, designed between 1957 and 1965 by Dante Giacosa. This example is from 1968.Credit…Vincent Tullo for The New York Times

If, however, you asked me which auto says the most about the culture of its time and ours, it’s the VW Beetle, parked upstairs, where it’s shown with a 1950s film reel from the assembly line. Properly called the Type 1 Sedan, the small, aerodynamic “people’s car,” designed by Ferdinand Porsche in 1938, responded to Adolf Hitler’s challenge to German industry to develop an inexpensive ride for a family of four. It would become, after the war, the world’s best-selling car, and a motor — quite literally — of West Germany’s economic miracle.

In a wall panel the curators mention the Beetle’s “inglorious origins,” though there is more recent VW unpleasantness this show and catalog do not discuss. Over the last decade, MoMA has enjoyed more than a million dollars in support each year from Volkswagen — a company that admitted to equipping 11 million cars with illegal software to cheat emissions testing, and then lying to investigators about the scheme. Researchers at West Virginia University found some cars equipped with the software belched almost 40 times the permitted levels of nitrogen oxides. In early 2017, Volkswagen pleaded guilty in the United States to criminal charges that included conspiracy to defraud the government, violations of the Clean Air Act and obstruction of justice. VW paid $20 billion to resolve civil and criminal charges related to the scandal, and that figure has grown since then.

Visitors pass the Jaquar E-Type Roadster, an icon of the Swinging Sixties, at  “Automania.”Credit…Vincent Tullo for The New York Times

While one VW division was violating the Clean Air Act, another was putting its name on MoMA programming that would boost its civic credentials — notably “Expo 1: New York,” at MoMA PS1, a Volkswagen-funded ecological showcase from 2013 that in retrospect looks like an egregious act of greenwashing.

“Volkswagen is das Auto, and MoMA is das Museum,” Martin Winterkorn, then its chief executive, said pithily in 2015. He is now facing criminal charges in the U.S. and Germany, though he has long contended that he was unaware of any wrongdoing.

Yet even after one of the largest corporate and environmental scandals in history, Volkswagen’s American subsidiary remains MoMA’s “lead partner of education.” It supports PS1’s public programming, which took place for nearly a decade in a Volkswagen-branded geodesic dome (finally retiring it in 2020). The museum has a traineeship program known as the VW Fellows, who appear in Volkswagen promotional materials and even get to visit the car plant in Wolfsburg. And Volkswagen of America underwrote the restoration of the Beetle in “Automania,” which the museum initially acquired in 2002.

A MoMA spokeswoman, Amanda Hicks, said in an email Wednesday that “VW has acknowledged that it betrayed the public trust” and “removed the leadership that allowed it to happen.” She added, “We’ve both continued our partnership and look to VW to live up to its promise to put the best interests of the public front and center.”

And really, this might all be so much inside-philanthropy, except that the organizers of “Automania” explicitly discuss polluters’ interest in art in the catalog and the museum’s online magazine. In both, Kinchin writes about the corporate practice of “artwashing, a by now well-established branding strategy practiced by the polluting fossil fuel industry.” The curator singles out Shell, which commissioned English artists to make posters of the bucolic English countryside; it also mentions Mobil, whose art philanthropy in the 1970s and 1980s was the subject of Hans Haacke’s institutional critique,and recent demonstrations against BP’s sponsorship of London museums.

For MoMA to criticize Shell, Mobil and BP for “artwashing,” and then to ignore the criminal polluters still supporting its own museum, takes a real brass neck. But some drivers, even when the future looks unsustainable, find it hard to give up their cars.

There’s No Dave Chappelle or Hannah Gadsby Without Mort Sahl

U.S.-Venezuela Tensions Heat Up Again After Extradition of Maduro Ally

‘Candyman’ Review: Who Can Take a Sunrise, Sprinkle It With Blood?
ZİYARETÇİ YORUMLARI