Merck Will Share Formula for its Covid Pill With Poor Countries

New York Is Pushing Homeless People Off the Streets. Where Will They Go?

The Harlem Hellfighters Were War Heroes. Then They Came Home to Racism.

[Want to get New York Today by email? Here’s the sign-up.] It’s Tuesday. Weather: The skies are expected to clear today and temperatures will …

Weather: The skies are expected to clear today and temperatures will reach the low 90s. It will be clear tonight. 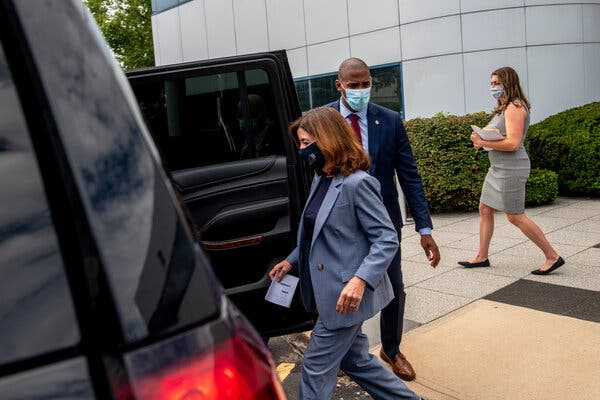 Shortly after midnight, Kathy Hochul was sworn in as the 57th governor of New York.

She becomes the state’s first female governor, taking leadership at an extraordinary time for New York.

The state still struggles to recover from the pandemic, presenting Ms. Hochul, previously the lieutenant governor, with several serious challenges in housing, public health and other areas. Her tenure begins after Andrew M. Cuomo resigned as governor following a state attorney general report that found that he had sexually harassed 11 women.

Ms. Hochul, a Democrat from western New York, has vowed to usher in a new era of civility and consensus in state government.

“I feel the weight of responsibility on my shoulders and I will tell New Yorkers I’m up for the task,” Ms. Hochul told WGRZ-TV, a Buffalo-based news station, shortly after she was sworn in. “I thought about all the women that came before me, including my mother who was not there, but a lot of women through history, and I felt they passed the torch to me.”

[Many members of the State Legislature have welcome Ms. Hochul’s rise with a sigh of relief after years of feuding with Mr. Cuomo.]

Ms. Hochul got her start in politics by working as a staffer on Capitol Hill and the State Assembly. She served 14 years on the Hamburg Town Board and, in 2007, was appointed Erie County clerk.

In 2011, Ms. Hochul was elected to Congress after winning a special election to replace Representative Christopher Lee, a Republican.

Mr. Cuomo picked her as his running mate in 2014, and she was re-elected as lieutenant governor in 2018.

Ms. Hochul’s first address will be streamed online at 3 p.m., where she will likely outline many of her priorities as governor.

Ms. Hochul has said she will take up to 45 days to determine which cabinet officials and top staff she wants to keep from the Cuomo administration.

But on Monday, Ms. Hochul announced her two top aides: Karen Persichilli Keogh, who most recently worked as head of global philanthropy for JPMorgan Chase & Co., will be secretary to the governor, and Elizabeth Fine, general counsel and an executive vice president at Empire State Development, will be Ms. Hochul’s counsel.

In a final address on Monday, which was prerecorded and 15 minutes long, Mr. Cuomo struck a defiant tone, claiming that “intense political pressure and media frenzy” had caused a rush to judgment on the sexual harassment allegations made against him.

In a sign he may not be fully exiting the public arena, he likened the attorney general report to a firecracker that started a “political and media stampede,” and said there would “be another time to talk about the truth and ethics of the recent situation involving me.”

2 Months of Rain in a Day and a Half: New York City Sets Records

The police commissioner is pleading with officers to get vaccinated, saying three officers have died of Covid-19 in the past week. [N.Y. Post]

A woman who called a vehicle through a ride-hailing service on Staten Island was sexually assaulted inside a car that picked her up, police said. [Staten Island Advance]

And finally: The fiberglass cows have returned.

The cows are back.

Twenty-one years ago, about 500 fiberglass cows — decorated by artists, celebrities and schoolchildren — were placed across New York City. The vibrantly colorful cows grazed in parks and on sidewalks, where tourists snapped photos, children clamored to climb up on them and thieves plotted attention-getting heists.

Now, though, the cows are less like a wild herd drumming up chaos across the five boroughs and more like an elite pack of pampered show cows being trotted out at the county fair.

Last week, 78 fiberglass cows were settled in eight locations in the city, mostly where they can be watched by security guards or cameras. At Hudson Yards, 22 cows stand inside and outside the luxury shopping mall, posing under the escalators or looking out a glass balcony toward Kate Spade and Coach (where handbags made of their skin can fetch hundreds of dollars).

The company in charge of the public art exhibition, CowParade, did not want a repeat of the events of 2000, when cows were defaced with graffiti, had their ears cut off or disappeared from their podiums. (In one case, two young men were in the process of loading a painted cow into their Jeep on West Houston Street when the police arrived.)

“That event was one hell of a learning experience for us,” said Jerome Elbaum, the founder of CowParade, who is now 81. “We were very naïve in those days.”

I was crossing a street in Midtown Manhattan. I noticed a man approaching from the left. We reached the corner at the same time.

I stopped to let him pass.

Who Will Save Alice’s Tea Cup?

He Was Swept Down a Sewer Pipe. ‘I Just Let the Water Take Me.’

How a Publishing Executive Spends Her Sundays
ZİYARETÇİ YORUMLARI