How Do I Hold a Co-op Board Accountable for Discrimination?

Finding a Home that Can Accommodate a Disability

In the Bronx, Mott Haven Suddenly Gets a Skyline

Hollie Howard discovered Lake Hopatcong while looking out the window of an airplane, en route to Newark Airport five years ago. A search of …

Hollie Howard discovered Lake Hopatcong while looking out the window of an airplane, en route to Newark Airport five years ago. A search of aerial views of lakes soon revealed that she had been flying over New Jersey’s largest freshwater lake. With a little more research, she learned that the lake was about 40 miles west of New York City, where she was living and performing in Broadway shows.

Over the next two years, Ms. Howard, a former musical-theater actress who is now the director of sales for a musical production company, spent weekends renting cars and driving out to the lake that straddles Sussex and Morris Counties, to look at houses there. In June 2018, she bought a four-bedroom lakefront home with a dock in the borough of Hopatcong, for $500,000. Since then, she has been transforming the 1890s house — once full of small, wood-paneled rooms — into a place with an open floor plan, with the help of her boyfriend, Ryan Morville, whom she met after moving in.

“I met the man of my dreams, and this place has become my Broadway show. It’s my everything,” said Ms. Howard, 46, speaking about the multiyear renovation production. But when Covid hit, Ms. Howard’s show became literal, as she was joined by theater friends fleeing the city for nightly serenades on her dock.

“A performer wants to perform, and suddenly we didn’t have any audiences,” she said of the regular song-and-dance performances that drew applause from passing boaters and later served as a fund-raising tool for the Lake Hopatcong Foundation.

For Joel and Tracy Beckerman, living in Hopatcong has been less like mounting a show and more like telling a story. Or rather, continuing a story already rich in detail. In May, the couple paid $1.4 million for one of the borough’s best-known homes, Sleepless Hollow, which was owned by Joe Cook, a vaudeville star, in the 1920s and ’30s. There, Mr. Cook entertained celebrities like the Marx Brothers, Ginger Rogers, Babe Ruth and Frank Capra, who enjoyed the home’s built-in pranks, including false doors and drop floors, as well as the basement speakeasy and theater.

“We were looking at homes, but this felt more like we found a story we could live in,” said Mr. Beckerman, a musical composer for television and advertising. He and Ms. Beckerman, a syndicated columnist, plan to restore the property to its former grandeur. 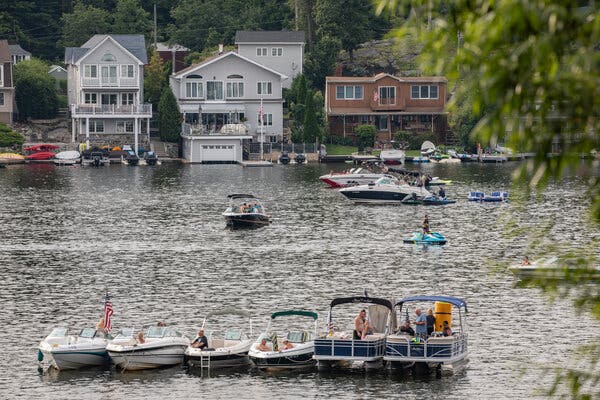 At Byram Cove, boaters anchor and tie up to each other to create a floating party. On a sunny summer weekend, the party can grow to hundreds of boats from throughout the region.Credit…Tony Cenicola/The New York Times

The Joe Cook era marked Hopatcong’s glory days, when vacationers in the early 20th century stayed in grand hotels, boated on the lake and visited Bertrand Island Amusement Park. After plane travel opened up more exotic locales, the area fell on hard times, and many of the old homes and hotels burned down or were otherwise destroyed. But the lake is now enjoying a second act, as more people have discovered its vacation-like charms during the pandemic.

“The lake is as successful as it’s ever been in my lifetime,” said Martin Kane, 65, the borough’s historian, who has seen the lake go through many ups and downs since he arrived in the area 60 years ago, when his family bought a lakeside cottage for $16,000. “People are putting more money into their houses than ever before. It has a very good vibe right now.”

One such investor is Lawrence Rubinstein, a partner in a wealth-management firm in Princeton Junction, N.J., who visited a friend on the lake eight years ago and, by the end of the weekend, had put in bids on several houses. He and his wife, Camille Rubinstein, now live in the lakeside house they bought for $737,00 in 2013, and have since completely rebuilt it, spending another $1.5 million.

“You wake up in the morning and see the sunrise glow on the lake,” said Mr. Rubinstein, 61. “You go to dinner by boat. Everyone on the lake is your neighbor. It’s a different way of living. We call it lake life.”

Nine miles long, three miles across and as deep as 65 feet, Lake Hopatcong is surrounded by the townships of Jefferson and Roxbury, and the boroughs of Mount Arlington and Hopatcong. Occupying most of the western shore, Hopatcong lays claim to the biggest stretch of lakefront, with about 900 of the area’s 2,200 lakefront homes, Mr. Kane said. Full of coves and inlets, the lake’s jagged coastline — 45 miles of it — gives residents and boaters many options.

“You can live on the main part of the lake, where it’s very active. But you can also tuck into one of the coves, where it’s a lot calmer,” said Kathleen Courter, a broker with Re/Max, who lives in Roxbury.

With about 15,000 residents living in its 12.35 square miles, Hopatcong is the third largest of the municipalities surrounding the lake. While its waterfront homes are in the greatest demand, more modest ones can be found inland, and some of them come with beach rights through neighborhood associations. (There are no municipal beaches in Hopatcong; the only public beach is Hopatcong State Park, at the southern end of the borough, which fills up early on a sunny summer day.)

Two condominium developments have been built in the borough in the past five years: one near the River Styx Bridge and another at Mariner’s Pointe. There is a townhouse development across the lake in Mount Arlington, on the site of a former amusement park that closed in 1983.

Many activities in Hopatcong revolve around the lake: boating and swimming in the summer; skating and ice fishing in the winter, when the lake freezes over. So when the state officially closed the lake and Hopatcong State Park in the summer of 2019 because of high levels of cyanobacteria, it had a noticeable effect on the area, as did the drop in tourism during the pandemic.

“People here still swam and went out on their boats, but when the state shut the lake down, it really hurt. Covid also hurt the lake,” said Karen Foley, an agent with Prominent Properties Sotheby’s International Realty, who lives in Mount Arlington. “But this summer, we are really in a great position.”

There are two yacht clubs on the lake, and Nolan’s Point in Jefferson has become a center of water activity, including water biking and dinner cruises.

Beyond the lake, Hopatcong has focused on older residents, who make up about 40 percent of the borough’s population, said Bradley Hoferkamp, a Hopatcong councilman. Pickleball courts have been added to the recently refurbished tennis courts near the senior center, which provides daily lunches for $2 and sponsors numerous activities, including a Christmas party that Mr. Hoferkamp said “is as good as any wedding.”

Last year, the average SAT scores at the high school were 536 in reading and writing and 511 in math, compared with state averages of 536 in each.

The high school has an award-winning marching band and offers 13 Advanced Placement courses. It also has a Future Teachers Academy, for those interested in teaching careers, and has a collaborative arrangement with Sussex County Community College, so students can earn college credits.

The Lake Hopatcong Historical Museum is in an 1825 structure that was the lake tender’s house when the lake served as a primary water source for the Morris Canal. The museum displays artifacts from Lake Hopatcong’s heyday, when many theater and vaudeville celebrities visited the area.Credit…Tony Cenicola/The New York Times

Hopatcong is about 45 miles west of Manhattan, and driving into the city takes about an hour and 20 minutes, depending on traffic.

There are no train stations in Hopatcong, but New Jersey Transit trains run from Mount Arlington and Roxbury into Penn Station, with transfers in Dover or Newark. The trips take from about 90 minutes to more than two hours, and cost $16 one way or $451 for a monthly pass.

Bus service by Lakeland Bus Lines has been suspended since the beginning of the pandemic.

At 900 feet above sea level, Lake Hopatcong represented the summit of the Morris Canal and served as the largest feeder of water for transporting coal and iron east from mines in Pennsylvania and New Jersey to New York, along the canal, from 1824 to 1924. The canal’s success spurred the building of a railroad line, and tourism followed. By 1900, more than 40 hotels and rooming houses surrounded the lake, and the area became a popular getaway for actors, vaudevillians and burlesque stars.

Homes for Sale in Brooklyn, Manhattan and the Bronx