So Your Rent Is About to Spike. Can You Avoid Paying More?

The Best (and Worst) Metro Areas for Electric Cars

For Military Families, V.A. Loans Are a Lifeline, but With a Catch

Homes for Sale in New York and New Jersey
Anasayfa » Sağlık » A Derelict Warehouse as a Second Home?

A Derelict Warehouse as a Second Home?

When Michael Northrup began fantasizing about buying a derelict fruit-processing and storage facility in Tieton, Wash., as his second home, even …

When Michael Northrup began fantasizing about buying a derelict fruit-processing and storage facility in Tieton, Wash., as his second home, even his design-savvy friends weren’t sure what to think.

On his first visit in 2015, he said, “I took a developer friend, an architect friend and my best friend.” They all thought he was out of his mind.

The roughly 10,000-square-foot building was uninhabitable and had been ransacked and stripped of much of its electrical wiring. But after months of house hunting in the area, which Mr. Northrup loved for its burgeoning creative scene about 150 miles southeast of his primary home in Seattle, he was ready to make a move. 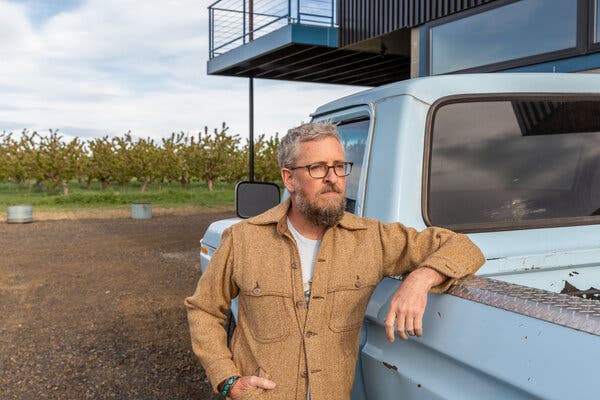 It was an unconventional idea, but Mr. Northrup, 52, an amateur artist who works in cloud computing at Accenture, was struck by the beauty of the surrounding cherry orchard, the view to Cleman Mountain and the possibilities offered by a run-down warehouse from the 1950s.

“I just couldn’t get it out of my head,” he said. “I asked too many people and got too many opinions, but realized I had to follow my gut. It was just too fascinating to not do it.”

That October, he bought the structure, which sat on a one-acre lot, for $70,000. Then he bought a vintage Timberline travel trailer and parked it inside. For the first couple of years, he spent the warmer months living in the trailer, using the warehouse’s two bathrooms and showering outside after connecting a hose to a propane heater. Each winter, he drained the plumbing to keep it from freezing.

But he wanted something that didn’t feel so transient: a comfortable, permanent home he could use year-round. So in 2017, he commissioned Best Practice, a Seattle architecture firm, to come up with a plan.

The living room has plywood floors and walls. The furniture includes a cluster of wood tables made by Mike Hiler, a local artist, along with a Case Study Furniture wood daybed (from $2,390) and Eames lounge chairs (from $1,095).Credit…Rafael Soldi

Over the next two years, Mr. Northrup and his architects explored various options. He first asked for a home built from shipping containers, then decided that approach wasn’t ideal. The architects toyed with the idea of converting part of the warehouse into a home, or inserting a stand-alone house inside it. In the end, they concluded that the best course of action would be to demolish a garage at one end to make way for a two-story, 1,100-square-foot stand-alone house, linked to the original structure by a new courtyard.

“It was really important to get up high, because once you get above 10 feet, you’ve got a sweeping view of the top of the cherry orchards and the fields beyond,” said Ian Butcher, the founding partner of Best Practice, who positioned the living room and kitchen on the top floor of the new house. Where the house faces the warehouse, he said, “we carefully crafted a series of smaller, punched windows to highlight interesting, cool parts of the existing building.”

An elongated roof covers a 250-square-foot deck at the front of the living room, and the home’s single bedroom is on the ground floor.

The kitchen has cabinets from Canyon Creek and plastic-laminate counters with an exposed plywood edge.Credit…Rafael Soldi

For budgetary reasons and to reflect local building traditions, the architects worked with durable, economical materials, including concrete blocks and corrugated metal siding on the exterior, and plenty of exposed plywood on the interior. As Mr. Butcher said, “We were thinking of it as an abstract interpretation of an agrarian building.”

Mr. Northrup’s builder, Greg Stevenson, began work in the summer of 2019 and completed the house last fall, at a cost of about $350,000. Since then, Mr. Northrup has spent most of his time there, enjoying the landscape, forging connections with other creative people in the area and experimenting with how best to use his warehouse.

“I call it ‘playing warehouse,’” he said. “I can do things there that you could never do in a house. I can say, ‘Let’s put a bunch of screws on the wall to hold up a tent.’ Or you can build something, or paint something, or paint over something. You’re just free to play.”

One day, he decided to paint a large-scale work of yellow semicircles to enliven the courtyard. Another day, he built a warehouse bedroom with friends, so he would have a place for overnight guests who don’t want to sleep in the trailer.

Along with a well-equipped workshop, “the primary, big room where they used to store apples is set up so it could be a tennis court or host a big dance party,” Mr. Butcher said. “He does movie nights there, with a projector and a bunch of sofas he’s put on wheels.”

This fall, he’s planning to hold a group art exhibition there.

When Mr. Northrup first saw the warehouse, “I just couldn’t get it out of my head,” he said. “I asked too many people and got too many opinions, but realized I had to follow my gut.” Credit…Rafael Soldi

“To this day, everyone’s like, ‘What’s the plan?’” Mr. Northrup said of his warehouse. “I’ve never known. Even now that I have a house there, it’s still constantly evolving. For now, we’re just going with it.”

Homes for Sale in New York and Connecticut

House Hunting in Scotland: A Unique Hybrid in the Highlands for $2.7 Million