These two rumors are going viral ahead of California’s recall election.

How the U.S. Helped, and Hampered, the Escape of Afghan Journalists

‘Like Choosing a Pope’: How Succession Got Messy at ‘Jeopardy!’

Ben Affleck and Jennifer Lopez are Back Together, and We Can’t Look Away

How Mexico Helped The Times Get Its Journalists Out of Afghanistan

In Candid Photos, Shannen Doherty Shows the Ravages of Breast Cancer
Anasayfa » Foto Galeri » Getting Intimate With the Celebrity Regulars of River Cafe

Getting Intimate With the Celebrity Regulars of River Cafe

LONDON — Michael Caine has been a regular at the River Cafe for decades, dining with his family, usually on a Wednesday or Thursday, and always …

LONDON — Michael Caine has been a regular at the River Cafe for decades, dining with his family, usually on a Wednesday or Thursday, and always at Table 4, the most coveted seat in this celebrated Italian restaurant in Hammersmith.

So, when Ruth Rogers, the River Cafe’s American-born proprietor, set about creating a new podcast in which she interviews famous guests about what food means to them, she naturally turned early on to Mr. Caine. For Ms. Rogers, who is known to all as Ruthie, he was comfort food for a first-time podcaster.

Mr. Caine spoke vividly about the memorable meals he’d had, his other favorite restaurants — Chasen’s in West Hollywood; Elaine’s in New York — and above all, about his childhood in Cockney London, where fish was always on the menu because his father, a porter in a fish market, would “nick” some on the way home.

What, she asked the 88-year-old actor, was his comfort food? “Years ago, it was sausage and mash,” he replied. “Now, it’s caviar.” 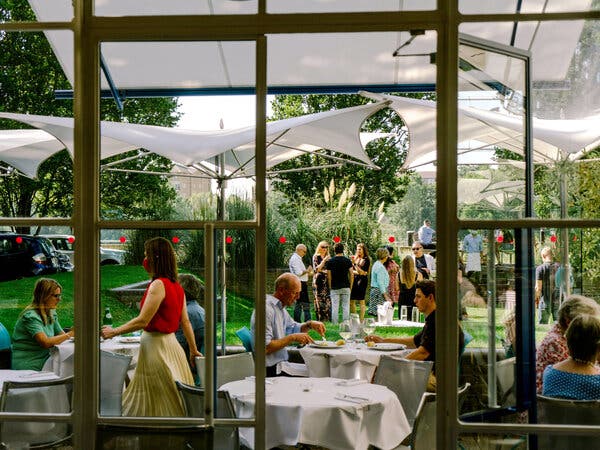 Diners on the River Cafe’s outdoor terrace, which was fitted with glass partitions during the pandemic.  Credit…Alex Atack for The New York Times

A good line, and one that could serve as a metaphor for the series, “River Cafe Table 4,” which debuts Tuesday on iHeartMedia, Apple Podcasts and other sites. Ms. Rogers has assembled a formidable array of A-list names for the first 38 episodes: Paul McCartney, Al Gore, David Beckham, Glenn Close, Tracey Ullman, Salman Rushdie, Pete Davidson, Ralph Fiennes and so on.

What at least some of them have in common are humble roots and a vertiginous rise to fame and fortune: in Mr. Caine’s case, from a South London tenement to a weekly booking at the River Cafe, where the mozzarella di bufala starter is 23 pounds (about $31) and the wild Scottish salmon with salsa verde goes for £43 ($59).

For all of her restaurant’s glamour, Ms. Rogers has managed to cultivate a sense of family there. Many of the customers on a given night are regulars, and the ones she interviewed really do seem to love the place. In persuading them to talk about the role food has played in their lives, she aims to make even the most rarefied celebrities appear a bit more human. During the pandemic, she pointed out, even stars have had to eat at home.

“People talked a lot about what they ate and cooked when they were with their families all day,” said Ms. Rogers, 73, over antipasti, ravioli and gelati at the recently reopened River Cafe. “Even though a lot of these people sound very glitzy,” she added, “the kitchen is a great equalizer.”

The idea of an audio series first occurred to Ms. Rogers, she said, on a visit to Roberta’s, the acclaimed Brooklyn pizzeria that has a radio station in its backyard. (She has already turned the River Cafe into a brand-extension empire, with cookbooks, a television series and an online shop.) She was further inspired after holding a charity fund-raiser in her London home in 2009, at which the actor Ian McKellen recited a recipe for ribollita soup from one of her cookbooks.

Ms. Rogers with her stepson Zad Rogers, who is a co-producer of her podcast.Credit…Alex Atack for The New York Times

Each episode of “River Cafe Table 4” begins with the guest reading the recipe for one of the restaurant’s dishes. Mr. McCartney read one for roasted eggplant. David Beckham, the soccer star, did tagliatelle with girolles, while Christiane Amanpour, the CNN host, recited a cocktail recipe, for a Negroni Caldo.

What follows is a free-flowing conversation between Ms. Rogers and her guests, with food as the jumping-off point for meditations on health, work, success and childhood. A gentle inquisitor, Ms. Rogers avoids the predictable. (She didn’t ask Mr. McCartney about the Beatles or Mr. Gore about climate change.) But those topics have a way of coming up anyway.

Mr. McCartney reminisced about the first time he drank wine, after hitchhiking to Paris with John Lennon, who had inherited £100 from a relative. “We took a sip and thought: ‘God, that is terrible. It’s like vinegar.’” Mr. Gore discussed the soil he put down at his Tennessee farm to make it more sustainable.

The interviews range from cozy (Ms. Close, from an affluent family in Greenwich, Conn., told Ms. Rogers that her comfort food was Oreo cookies) to stark (Tracey Emin, the British artist, talked about growing up in poverty, with a single mother and a father who was married to another woman).

Some of Ms. Rogers’s guests are confirmed food obsessives. The actor Jake Gyllenhaal told her that he researches restaurants in cities before he goes to promote a film. But Victoria Beckham, the fashion entrepreneur and former Spice Girl, suggested that food was an indulgence someone in her line of work could ill afford.

“I’m a very fussy eater,” Ms. Beckham told Ms. Rogers, after reciting a recipe for roasted marinated sea bass. “I like things to be cooked in a very simple way.”

Ms. Rogers with David Beckham, after she gave him a cooking lesson at the River Cafe.Credit…Matthew Donaldson

She attributed her lack of adventurousness to her mother, who she said once used the oven as a filing cabinet. “If it didn’t go in the microwave, she wasn’t interested in it,” Ms. Beckham recalled. Her husband, David, on the other hand, loves eating. He asked for a cooking lesson from Ms. Rogers in return for recording an episode. (The Beckhams are the only couple who have both taken part; Mr. McCartney and his daughter, the designer Stella McCartney, are the only father-daughter duo.)

Mr. McCartney, who stopped eating meat in the late 1970s, discussed how attitudes toward vegetarianism have changed. In the early days, he recalled asking for meat-free options at Claridge’s, the grand Mayfair hotel, where the sniffy waiter returned with a plate of steamed vegetables. Now, he said, restaurants with vegetarian menus are so good that he often overeats.

For the record, Mr. McCartney’s comfort food is a quesadilla.

The pandemic freed up time for busy performers like Mr. McCartney to record the sessions. But she had to conduct the early interviews over Zoom. Ms. Rogers, who has an easy-listening voice and a tactile manner, said she found that more challenging than the recent ones, recorded face to face at the restaurant.

“She has no inhibitions about talking to people,” said Zad Rogers, one of her stepsons, whose company, Atomized Studios, produced the podcast with iHeartMedia. “But I was a bit worried about the length of the conversations.”

With the River Cafe buzzing again, Ms. Rogers has happily returned to her role as an uber-connected host, alighting from table to table to greet regulars. On a recent afternoon, she hugged Jonathan Newhouse, the chairman of Condé Nast International, who was dining with her son Roo Rogers.

The garden at the River Cafe, which is housed in a converted oil warehouse on the banks of the Thames.Credit…Alex Atack for The New York Times

Ms. Rogers, who grew up in Woodstock, N.Y., is married to the architect Richard Rogers, famous for designing the Pompidou Center in Paris. She and a partner, Rose Gray, opened the River Cafe in 1987, first as a canteen for her husband’s firm. (Ms. Gray died in 2010.) Mr. Rogers designed the restaurant’s airy space, in a converted oil warehouse on the north bank of the Thames.

These days, life at the River Cafe looks grand. Next to Mr. Newhouse’s table, a table of young Americans gossiped as a bottle of Billecart-Salmon Champagne chilled in a silver bucket. But the pandemic took a toll, Ms. Rogers said: An early effort to deliver food fell apart after her chefs told her they were worried about contracting Covid-19. She has also lost staff members because of Brexit.

“Normally, when I’m in Italy and I meet a really good waiter, I’ll say, ‘Why don’t you come to London?’” she said. “I said it to someone in Venice this summer and he said, ‘I can’t. You don’t want us.’”

Still, Ms. Rogers is looking forward with hope. She talked about upcoming guests, like the actor and food connoisseur Stanley Tucci, and Jony Ive, Apple’s former chief designer. There are people she would like to interview, among them John McEnroe and Bill Gates. “A lot of the Silicon Valley people don’t eat,” she marveled.

And she doesn’t mind poking affectionate fun at her guests. When Mr. Gyllenhaal held forth about the rituals of eating out, which included booking a table — “in the case of your restaurant, months in advance” — she shot back, “When did you ever a book a table months in advance?”

Head of Paramount Pictures is ousted as ViacomCBS focuses on streaming.

Can Paramount+ Succeed? One Producer Hopes to Make It So.
ZİYARETÇİ YORUMLARI

The Liberal Activist Who Targets Republicans With a MAGA Masquerade