Federal Jobless Aid, a Lifeline to Millions, Reaches an End

Rising Rents Are Fueling Inflation, Posing Trouble for the Fed

Facebook Struggles to Quell Uproar Over Instagram’s Effect on Teens

SAN FRANCISCO — Over the past few weeks, top Facebook executives assembled virtually for a series of emergency meetings. In one gathering last …

SAN FRANCISCO — Over the past few weeks, top Facebook executives assembled virtually for a series of emergency meetings.

In one gathering last weekend, half a dozen managers — including Adam Mosseri, head of Instagram, and Nick Clegg, Facebook’s vice president of global affairs — discussed pausing the development of an Instagram service for children ages 13 and under, said two people briefed on the meeting. Mark Zuckerberg, Facebook’s chief executive, weighed in to approve the decision, the people said.

The meetings continued this week, with a larger group that included Facebook’s “Strategic Response” teams, which are overseen by Mr. Clegg, the people said. The executives debated what to do about internal research around teenagers and Instagram, they said, and decided to publicly release some information but annotate it to add context.

Facebook has been in an uproar over the past few weeks, which the meetings were held to quell. The tumult began after The Wall Street Journal published a series of articles last month that showed Facebook knew about the harms of its services, including teenage girls saying that Instagram made them feel worse about themselves. The articles were based on a trove of Facebook documents, which were leaked by an unidentified whistle-blower.

The revelations immediately set off a wave of criticism from regulators and lawmakers, many of whom moved swiftly to call the company to account. As scrutiny mounted, Facebook delayed the Instagram service for children. On Thursday, Antigone Davis, Facebook’s global head of safety, was questioned for more than two hours by lawmakers about the mental and emotional toll its services could take on kids.

Inside Facebook, top executives have been engulfed by the crisis, with the fallout spreading through parts of the company and disrupting its “Youth Group,” which oversees research and development for children’s products like Messenger Kids, according to interviews with a dozen current and former employees, who were not authorized to speak publicly.

To navigate the controversy, Mr. Zuckerberg and Sheryl Sandberg, the chief operating officer, have approved decisions on how to respond but have deliberately kept out of the public eye, said two people with knowledge of the meetings. The company has leaned on its “Strategic Response” teams, which include communications and public relations employees. 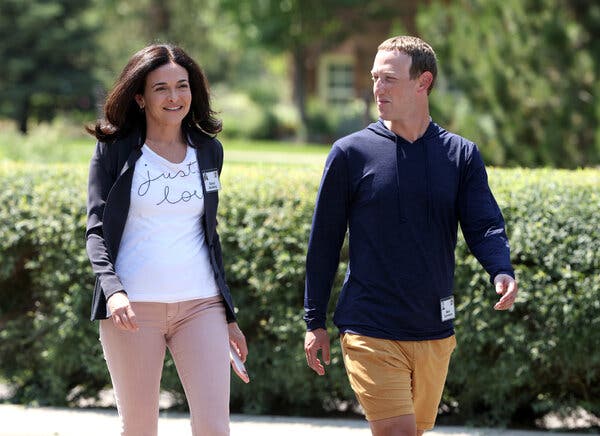 Mark Zuckerberg, Facebook’s chief executive, and Sheryl Sandberg, the chief operating officer, in Sun Valley, Idaho, in July. They have been publicly quiet about Instagram’s effects on teenagers.Credit…Kevin Dietsch/Getty Images

The effort has been so time-consuming that several projects due to be completed around this time have been postponed, said people with knowledge of the company’s plans.

But some of Facebook’s containment has at times backfired with its own workers. This week, the company downplayed the internal research that The Journal had partly based its articles on, suggesting that the findings were limited and imprecise. That angered some employees who had worked on the research, three people said. They have congregated on group chats to decry the characterizations as unfair, and some have privately threatened to quit.

In one group text message chain shared with The New York Times, Facebook data scientists and researchers discussed how they were being “embarrassed” by their own employer. On a company message board, one employee wrote in a post this week: “They are making a mockery of the research.”

“Facebook’s UX research team is one of the best in the industry,” said Sahar Massachi, a Facebook engineer who worked on election integrity and left the company in 2019. “Instead of attacking their employees, Facebook should be giving integrity researchers the authority to more fully do their jobs.”

The furor is unlikely to die down. On Sunday, the whistle-blower who leaked the internal research and is a former Facebook employee is set to reveal her identity and discuss the documents on “60 Minutes.” She will then appear at a Senate hearing on Tuesday to testify about what she discovered while conducting research at Facebook.

Kevin McAlister, a Facebook spokesman, said the company has been “under intense scrutiny, and it only makes sense that we’ve built teams to streamline internal and external responses, as well as for those teams to help fast-track fixes in areas where we need to improve.”

Since the Journal articles were published starting on Sept. 13, Facebook’s “Strategic Response” teams, which have handled many crises in recent years, has grappled with responses. The teams, led by company veterans Tucker Bounds and Molly Cutler and acting under the direction of Mr. Clegg, sought input from Facebook’s top researchers, the people said. Facebook then pushed back with blog posts that said The Journal articles were inaccurate and lacked context.

Executives also convened to discuss the future of research at Facebook, said two people briefed on the calls. Some questioned whether the social network should continue conducting research on its products because they said companies such as Apple did not do similar user studies. Mr. Clegg supported continuing the research, the people said, and others ultimately agreed.

Mr. Mosseri also reached out to employees to assuage fears about the company’s products for teenagers. In an internal post last month about “Teen Well-being On Instagram,” he said he was “proud” that the company did the research featured in the Journal article and added “that we invest heavily in safety and integrity.”

But some employees said the post, which was shared with The Times, did little to ease their concerns.

Adam Mosseri, head of Instagram, at Instagram’s offices in Manhattan in 2019. In an internal post last month, he said he was “proud” of the company’s research.Credit…Ricky Rhodes for The New York Times

“If Instagram can cause 3 percent of our users to report strongly negative thoughts (depression, anxiety, self-harm), I think that’s a problem worth looking into,” one employee wrote in a widely circulated internal note. “Our policies of covering up this kind of research are creating difficult political, regulatory and legal problems for the company.”

Mr. Zuckerberg and Ms. Sandberg were both briefed on and approved the decisions made over the last few weeks, but have been publicly absent to keep away from negative press, said two employees.

Mr. Zuckerberg posted a video last week of himself fencing with Olympic gold medalists, shot through the frames of new sunglasses that Facebook and Ray-Ban worked on together that can record videos. On Wednesday, Ms. Sandberg posted a story about small businesses in the United Arab Emirates on her Facebook page.

Some projects have been tabled while executives deal with the fallout. An initiative to introduce an election oversight committee has been delayed, said two people with knowledge of the effort.

On Wednesday, after the meetings with the “Strategic Response” teams and other executives, Facebook publicly released two research reports that The Journal had partly based its stories on, ahead of the Senate hearing on Thursday.

Facebook annotated the reports, appearing to downplay the results. Next to one slide in the research that said “teens who struggle with mental health say Instagram makes it worse,” the company added that the headline was imprecise. Instead, it wrote, “The headline should be clarified to be: ‘Teens who have lower life satisfaction more likely to say Instagram makes their mental health or the way they feel about themselves worse than teens who are satisfied with their lives.’”

After the annotations became public, Facebook researchers messaged one another in disbelief, said two employees. Many felt that the notes threw them — and their methodology — under the bus, the people said.

One Facebook researcher said a colleague was contacted by the legal team in the past week and was asked about a research report that he published more than two years ago. The legal team appeared to be hunting for any potentially incriminating research that might be shared with reporters, he said.

His manager had advised him not to run any queries searching for specific terms on his old work or do anything that could appear suspicious, he said.

Now, he said he was told, was a good time to take a vacation.

I’m Not a Pilot, but I Just Flew a Helicopter Over California