Key takeaways from the fifth week of the Elizabeth Holmes trial.

A Thumbs Down for Streaming Privacy
Anasayfa » Teknoloji » Some Say Low Interest Rates Cause Inequality. What if It’s the Reverse?

Traders on the floor of the New York Stock Exchange on Friday.Credit…Brendan Mcdermid/ReutersIt’s an article of faith among many in the … 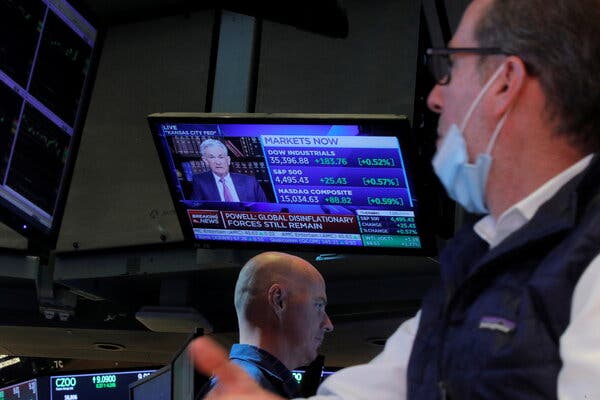 Traders on the floor of the New York Stock Exchange on Friday.Credit…Brendan Mcdermid/Reuters

It’s an article of faith among many in the financial world: The Federal Reserve’s low interest rate policies and other steps meant to boost the economy are driving the value of stocks and other assets to the moon, and thus are a major cause of high wealth inequality.

That idea can be heard in documentaries, newspaper opinion articles and many segments on cable financial news. It may also be backward.

New evidence suggests high inequality is the cause, not the result, of the low interest rates and high asset prices evident in recent years. That is a provocative implication of new research presented on Friday at the Federal Reserve Bank of Kansas City’s annual Jackson Hole economic symposium (which was conducted virtually because of the pandemic).

Seeing how that new notion connects with the boom in markets — and the risks to financial stability whenever it ends — means grappling with just why interest rates are so low, financial asset prices are so high, and what the Fed has to do with it.

Advanced economies have experienced low interest rates for more than a decade. These can be viewed as less a result of central bankers’ decisions and more as a consequence of powerful global forces pushing them downward — creating a corresponding surge in asset prices.

In effect, a global glut of savings has caused a decline in the “natural rate” of interest, also known as r* (and pronounced r-star): the rate that neither stimulates nor slows the economy.

Central bankers, in this story, are the equivalent of drivers on a highway who must adapt their speed to road conditions. The Fed has kept rates low for the last decade because those rates have been the ones that keep the economy stable. If it had tried to push them higher, the result would have been a recession.

“Central banks now appreciate that r-star has fallen, and that means they’re going to have limited ability to tighten monetary policy in the future,” said Kristin Forbes, an economist at M.I.T., in a presentation at the symposium.

But that raises the question of why this savings glut exists at all.

The paper, by Atif Mian of Princeton, Ludwig Straub of Harvard and Amir Sufi of the University of Chicago, looks at two leading explanations: the demographic effects of the baby boom generation’s accumulation of retirement savings, and the effects of higher inequality, given the fact that rich people save a larger share of their income than the middle class and the poor.

They found that the role of higher inequality was far more important than that of demographics.

It’s not that the high earners increased their savings rates. Rather, they were winning a bigger piece of the economic pie; by the researchers’ calculations, the share of income going to the top 10 percent of earners rose to more than 45 percent in recent years, up from about 30 percent in the early 1970s.

The result of high earners making more, and thus saving more, amounts to trillions of dollars in additional savings over the years — accounting for 30 percent to 40 percent of private savings from 1995 to 2019.

So whatever the causes of rising income inequality — most likely a combination of technological change, decline in union power, globalization, changes in tax policy and winner-take-all market dynamics — it has set in motion forces resulting in the accumulated assets of those wealthy people skyrocketing in value.

“As the rich get richer in terms of income, it creates a saving glut,” Professor Mian said. “The saving glut forces interest rates to fall, which makes the rich even wealthier. Inequality begets inequality. It is a vicious cycle, and we are stuck in it.”

Their paper is hardly definitive, and other economists at the symposium noted a few issues — for example, that the decline in the natural rate of interest has been a global phenomenon, taking place even in countries with different income inequality trends than those in the United States. And Jason Furman, the Harvard economist, noted that the widening of inequality was most intense in the years before 2000, while the decline in the natural interest rate has mostly taken place since then.

But regardless of just how strong a factor income inequality is in driving low rates, high asset prices and higher wealth inequality, the situation does put the Fed and other global central banks in a difficult spot.

“These forces pushing down r-star are probably so powerful that the Fed could never fight against them,” Professor Sufi said in an email.

And whatever the causes, it has resulted in a situation where even a modest reversal of rates could make debt obligations burdensome, causing unpredictable ripple effects.

“The transition to a higher-rate environment could be pretty bumpy, given that a lot of asset values and assessments of debt sustainability are built on very low interest rates” over a very long time, said Donald Kohn, a former vice-chair of the Fed who is now at the Brookings Institution, in a speech at the symposium calling for more aggressive action to stem risks in the financial system.

If nothing else, the new paper is more evidence of how some of the world’s most entrenched economic problems intersect in complex ways. And it implies that what happens next, on interest rates, inflation, growth and everything else about the economic future, is more interrelated than it might first appear.

Smartphones May Be Too Good

Will the Pandemic Productivity Boom Last?

Where the Suburbs End