Republican Candidate for Manhattan D.A. Sees a City on the Brink

A Presidential Visit and a Promise of Federal Aid

Statues Reflecting on Racial Injustice Are Erected in Union Square

How New Yorkers Can Help Haiti After the Earthquake

What’s Next for SoHo?
Anasayfa » Manşet » Commuter Trains Have Kept Rolling. Will All Those Riders Ever Return?

Commuter Trains Have Kept Rolling. Will All Those Riders Ever Return?

Before the coronavirus pandemic, New York City’s commuter railroads had one main job: They delivered 300,000 tightly packed passengers to work …

Before the coronavirus pandemic, New York City’s commuter railroads had one main job: They delivered 300,000 tightly packed passengers to work each morning, and carried them home again in the evening.

But the pandemic disrupted that daily ebb and flow, keeping most of the regular riders at home for the last 17 months. The widespread shift to working from home has left the three main commuter railroads that serve New York City — the three busiest in the nation — struggling to reinvent themselves.

They have changed how they operate, drastically cutting service, reducing fares and offering new kinds of tickets. But they have not figured out how to replace the steady monthly revenue the pandemic wiped out — some of which may never return if workers do not resume five-day-a-week commuting. Hundreds of merchants whose businesses depend on commuters face equally uncertain prospects. 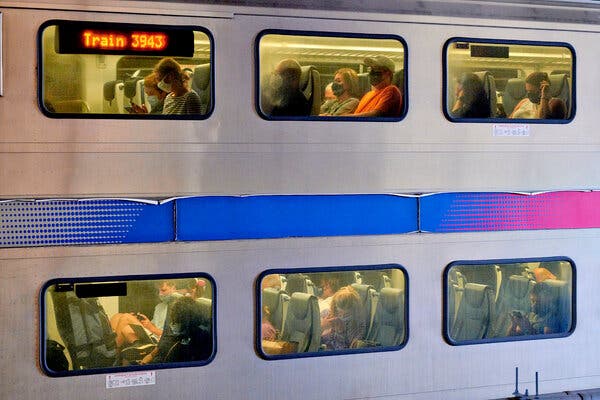 Ridership on N.J. Transit is less than half what it was during prepandemic times. Credit…Gabby Jones for The New York Times

“The commuter railroads have been really hammered during the pandemic,” said Robert Puentes, president of the Eno Center for Transportation in Washington. “It’s hard to overstate the transformations that are happening because of this pandemic.”

The three railroads that feed workers to New York City — the Long Island Rail Road, Metro-North Railroad and N.J. Transit — have been among the hardest-hit in the nation, along with systems in Boston and the San Francisco area. After plummeting more than 90 percent in the early months of the pandemic, weekday ridership on all three New York region railroads is still less than half of what it was two years ago.

The two systems operated by the Metropolitan Transportation Authority — the L.I.R.R. and Metro-North — are carrying about 325,000 fewer passengers on the typical weekday. Before the pandemic, sales of monthly passes that often cost more than $400 accounted for about 40 percent of N.J. Transit’s ticket revenue.

Officials expect Metro-North to be running at about 85 percent of its prepandemic capacity by the fall.Credit…Gabby Jones for The New York Times

Back then, the trains on all three railroads were hauling record loads, and passengers routinely stood shoulder to shoulder in the aisles and vestibules of every car. But after the lockdown, empty seats abounded. In its latest fiscal year, which ended June 30, N.J. Transit took in just $72 million from sales of monthly passes, a drop of $300 million from two years ago.

The railroads have offset their steep losses of revenue with billions of dollars in emergency federal aid. The Metropolitan Transportation Authority received more than $14 billion and N.J. Transit is expecting a total of $5.3 billion.

These days, many of the people waiting on suburban platforms for trains into the city have swapped the daily rat race for a more flexible schedule. John and Eileen Herrera, for example, are going into the city less often — and hoping to keep it that way.

On a recent morning, the Herreras, from Lake Ronkonkoma, N.Y., were waiting, coffees in hand, for an express train to Pennsylvania Station in Manhattan. Ms. Herrera, 54, said she now goes to the office, where she works in sales for a technology company, just three days a week, instead of five. The floor of the building where she works is “practically empty,” she added.

Her husband, 56, is an architect who designs office interiors. He said he commutes three or four days, either to his office or a job site. “If we can work three days at the office and two days at home, it’s a perfect world,” Mr. Herrera said.

But for merchants in and around the region’s dozens of train stations, the lighter flow of commuter traffic is a threat to their existence.

Moshe Atzbi, 47, said “things were going so awesome” at Hailey’s Harp & Pub on Main Street in Metuchen, N.J., for several months after he bought it in October 2019. But within a few weeks of the initial lockdown, commuters stopped streaming by, the bagel shop across the street closed and a nearby bakery went out of business.

Moshe Atzbi owns Hailey’s Harp & Pub, which is near the N.J. Transit station in Metuchen. Credit…Gabby Jones for The New York Times

The pub has survived, he said, because of government relief and customer loyalty — plus a healthy serving of striver’s ingenuity. After remodeling with outdoor seating, Mr. Atzbi set up a beer truck and picnic tables in his back lot and called it the Craicyard, playing on the Irish term for fun.

“Businesses are still in distress, and we’re not out of the woods,” Mr. Atzbi said, as he smoked a cigarette and eyed the empty bagel shop. “We’re looking at September with the anticipation of better times, a return to closer to normal.”

The leaders of all three railroads had also predicted a resurgence of commuting after Labor Day. But, as the Delta variant has spread, many big employers have been postponing return-to-office plans to late fall or even next year.

On all three railroads, riders have returned in greater numbers on the weekends. That trend has Catherine Rinaldi, the president of Metro-North, talking about the system broadening its role beyond ferrying suburban office workers to and from Grand Central Terminal and becoming a “regional railroad.”

She and her counterpart at the L.I.R.R., Phillip Eng, said they believed their systems would gradually regain the record numbers of passengers they carried in 2019. But those passengers would be spread throughout the day, and not so heavily concentrated in the morning and evening rushes, Mr. Eng said.

Janno Lieber, the acting chairman and chief executive of the authority, said he expected “a serious surge” in ridership in September. He said Metro-North and the L.I.R.R., which have reduced service to match demand during the pandemic, would be running at about 85 percent of their prepandemic capacity by the fall.

The L.I.R.R. briefly made a deeper cut to service in early March. But after riders complained, the railroad reversed the additional cuts.

In its latest fiscal year, N.J. Transit took in just $72 million from sales of monthly passes, a drop of $300 million from two years ago.Credit…Gabby Jones for The New York Times

But the optimism of the railroad chiefs runs counter to the view of the authority’s own consultant, McKinsey & Co., which forecast that the commuter lines might reach only 80 percent of their prepandemic ridership by the mid-2020s.

Interviews with riders in recent weeks suggest that a more pessimistic forecast might be right. Few of them had returned to riding trains back and forth five days a week.

Customers sitting outside Wired Coffee House, near the Oceanside Long Island Rail Road station. Its owner opened it in April after taking over a shuttered coffee shop.Credit…Gabby Jones for The New York Times

To cater to this new breed of commuter, the authority is considering new ticket offerings, something to fill the gap between single rides and monthly passes, Mr. Lieber said. “We will be looking at a range of attractive fare structures,” he said.

N.J. Transit has already built that bridge by offering FlexPass. Introduced in February, it allows up to 20 one-way rides in a month at a 20 percent discount off individual tickets for that route.

“I wasn’t sure about it, but it worked out well,” said Peter Morin, 35, a mechanical engineer from South Orange, N.J., who gave FlexPass a try in June. “It seems like for once, New Jersey Transit actually kind of has its act together.”

Still, many riders who have returned to the trains seem wary of spending long periods sitting close to strangers, some of whom flout mask mandates.

In early August, advocates for commuters in Connecticut pleaded with Gov. Ned Lamont to demand that Metro-North fine riders who were not wearing masks. Data requested from the railroad by the Commuter Action Group in Connecticut showed that it had not issued a summons for failure to wear a mask since the authority had instituted the fines nearly a year ago.

The persistent uncertainty about the future of commuting has left a lot of businesses in and around train stations in limbo.

On the lower level of Grand Central Terminal on a recent Monday morning, Zachary Forman was hiring workers to restaff Tartinery, a French-style cafe and juice bar that had been closed for 15 months. Mr. Forman, the director of operations, said the spot near the train platforms had been the busiest of the company’s six locations, keeping 40 employees going “nonstop, all the time.”

On all three New York-area railroads, riders have returned in greater numbers on weekends. Credit…Gabby Jones for The New York Times

Mr. Forman, 40, said he had been surprised when he visited Grand Central in early July and saw how many people were passing through. “We thought Grand Central would continue to be vacant, with minimal foot traffic, for longer than this,” he said. Though, he added, “It is not at all what it was.”

At the L.I.R.R. station in Oceanside, a surge in train ridership was going to be critical for Urvish Singh. Mr. Singh, 25, took over a shuttered coffee shop there and reopened it in April as Wired Coffee House.

“Commuters have always been the backbone of this business,” Mr. Singh said. There were days when the shop took in “almost nothing” during the pandemic, he said.

The shop’s previous owner, Ubaid Bandukra, 32, said that before the pandemic, the shop served coffee, bagels and pastries to a steady clientele of about 125 customers each weekday morning.

Then, when the pandemic triggered a lockdown, Mr. Bandukra shuttered Caffeine and laid off his employees. He reopened Caffeine last summer and kept it going until the end of the year, sometimes working the counter alone. “But at the end of the day, I wasn’t making money,” he said.

He approved of Mr. Singh’s plan to rely less on commuters and try to draw more local traffic, given that there is so much available parking. “In order to build a sustainable business, a profitable business,” he said, “you cannot be commuter focused with so many fewer people taking the train.”

Threatened Birds Have a Defender on N.Y. Beaches: The Plover Patrol