Vaccination Rates in N.Y.C., and One Major Disparity

N.Y.C. is expected to require shots for all education staff, including teachers and principals.

‘This Is Really Scary’: Kids Struggle With Long Covid

[Want to get New York Today by email? Here’s the sign-up.] It’s Tuesday. Weather: Partly sunny, but a shower or storm could show up. High in …

Weather: Partly sunny, but a shower or storm could show up. High in the mid-80s. The National Weather Service warns of dangerously hot conditions tomorrow and Thursday.

Alternate-side parking: In effect until Sunday (Feast of the Assumption). 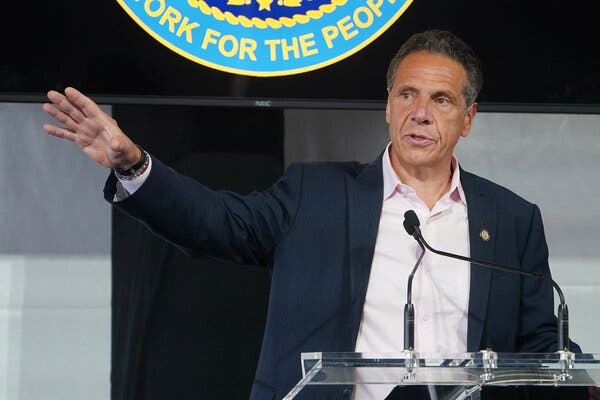 Gov. Andrew M. Cuomo is trying to buy himself time as the State Assembly lays the groundwork for impeachment proceedings and calls for his resignation mount, my colleagues Luis Ferré-Sadurní, J. David Goodman and Jeffery C. Mays report.

Defiant yet increasingly alone, Gov. Andrew M. Cuomo remained eager to fight back against findings that he sexually harassed 11 women as members of the Assembly met on Monday to prepare for impeachment proceedings, according to three people with knowledge of the matter.

Mr. Cuomo faced the prospect of becoming only the second governor to be impeached in the state’s history after a report by the New York State attorney general, Letitia James, concluded that he touched or verbally harassed the women.

[Read more about how impeachment proceedings for Mr. Cuomo are going forward.]

What Cuomo is doing privately

The fast-moving and fluid political crisis has left the governor holed up in the Executive Mansion as the fallout from the attorney general’s report increased.

The main approach Mr. Cuomo has been considering in recent days has been challenging whether the accusations are a basis for impeachment and dragging out the process as long as possible, one of the people familiar with the discussions said.

The governor has sought advice from his brother, the CNN anchor Chris Cuomo, and from longtime advisers including his pollster, Jefrey Pollock, the people said. But Mr. Cuomo has grown more isolated by the day, with few defenders, except for his lawyers, speaking out on his behalf.

What’s happening with the impeachment process

Impeachment appears increasingly inevitable: Carl E. Heastie, the speaker of the Assembly, believes he has the support from most, if not all, of the Democratic majority to impeach Mr. Cuomo, according to a person familiar with his thinking.

Articles of impeachment might not be considered until early September — after lawmakers review evidence, hold hearings and carefully deliberate whether there are grounds to impeach Mr. Cuomo.

Most people in his orbit are already convinced that he can do little to alter the political opposition against him in Albany.

More on the Cuomo report’s repercussions:

Roberta Kaplan, Who Aided Cuomo, Resigns from Time’s Up

Turning on Cuomo, Democrats Begin to Consider the 2022 Field

The Clock Is Ticking: What We Know About N.Y.C.’s School Reopening Plan

Almost half of New Jersey’s towns said they will ban cannabis businesses despite the drug’s legalization this year. [Gothamist]

A Bronx man was stabbed in the head in what appeared to be an unprovoked attack. [NBC New York]

A man was arrested in connection with the death of a Pelham Gardens 91-year-old found tied up in his garage, with trauma to his face and body. [PIX 11]

“West Side Story,” an ambitious, reimagined revival of the classic musical, will not reopen when Broadway returns this fall, the show announced Monday, making it one of the biggest productions yet to become a casualty of the pandemic.

The show’s lead producer, Scott Rudin, announced in April that he was stepping back from active roles in his Broadway productions after he came under fire for a long history of bullying employees. But Rudin said at the time that while the decisions about the future of “West Side Story” and his other shows would be left to others, he hoped that they would return to Broadway when theaters were allowed to reopen.

Multiple claims of sexual harassment. At least 11 women, including current and former members of his administration, have accused Mr. Cuomo of sexual harassment, unwanted advances or inappropriate behavior. He has refused to resign, and focus has turned to the State Assembly’s ongoing impeachment investigation.

Results of an independent investigation. An independent inquiry, overseen by the New York State attorney general, found that Mr. Cuomo had harassed the women, including current and former government workers, breaking state and federal laws. The report also found that he and aides retaliated against at least one woman who made her complaints public.

Nursing home death controversy. The Cuomo administration is also under fire for undercounting the number of nursing-home deaths caused by Covid-19 in the first half of 2020, a scandal that deepened after a Times investigation found that aides rewrote a health department report to hide the real number.

Efforts to obscure the death toll. Interviews and unearthed documents revealed in April that aides repeatedly overruled state health officials in releasing the true nursing home death toll for months. Several senior health officials have resigned in response to the governor’s overall handling of the pandemic, including the vaccine rollout.

Will Cuomo be impeached? The State Assembly opened an impeachment investigation in March. It has taken on new urgency with the release of the attorney general’s report, and its pace is now expected to pick up. Democrats in the State Legislature and New York’s congressional delegation, as well as President Biden, have called on Mr. Cuomo to resign, saying he has lost the ability to govern.

The “West Side Story” revival — put together by a creative team with avant-garde credentials, including the director Ivo van Hove and the choreographer Anne Teresa De Keersmaeker — opened in February 2020, less than a month before the coronavirus outbreak shut down Broadway and brought performances around the nation to a halt.

“This difficult and painful decision comes after we have explored every possible path to a successful run, and unfortunately, for a variety of reasons, reopening is not a practical proposition,” Kate Horton, a producer on the show, said in a statement. “We thank all the brilliant, creative artists who brought ‘West Side Story’ to life at the Broadway Theater, even for so brief a time, especially the extraordinary acting company, 33 of whom made their Broadway debuts in this production.”

Several other shows produced by Rudin are planning to return to Broadway. Aaron Sorkin’s stage adaptation of “To Kill a Mockingbird” plans to resume performances on Oct. 5 with Jeff Daniels back in the cast; the production announced that the show would now be overseen by Orin Wolf, who would be given the title of executive producer.

My sister wanted me to know that she loved me, but also, when was I going to move out? A week of apartment searching had turned into two weeks, then three.

It wasn’t supposed to be this hard. I wasn’t being picky. I had already given up on my foolish dream of a bedroom window. Dozens of visits across Brooklyn and Queens had gotten me nowhere.

On my fourth week of failure, I sat outside Wah Fung No. 1 Fast Food and buried my tears in a $4 box of barbecue pork.

What did this city have against me? I wanted to give up.

A man on nearby bench looked over and, totally unprompted, offered me a cigarette. I guess I looked like I needed one.

Sometimes I still regret not smoking that cigarette. But the gesture itself was such an honor: New York City had offered me a minute.

Merck Will Share Formula for its Covid Pill With Poor Countries

In a First, Surgeons Attached a Pig Kidney to a Human — and It Worked
ZİYARETÇİ YORUMLARI