Berkshire Hathaway Shakes Off the Ill Effects of the Pandemic

Hedge Fund’s Insiders Agree to Pay as Much as $7 Billion to I.R.S.

Russia’s New Addition to the Space Station: When to Watch

ROME — After a six-week diplomatic uproar over a scuttled submarine deal and accusations of American duplicity, President Biden made a one-on-one …

ROME — After a six-week diplomatic uproar over a scuttled submarine deal and accusations of American duplicity, President Biden made a one-on-one effort Friday to mend fences with President Emmanuel Macron of France by admitting that, yes, the matter could have been handled better.

“What we did was clumsy,” Mr. Biden told reporters hours after arriving in Italy to attend a summit with other world leaders. “It was not done with a lot of grace.”

By delivering an in-person mea culpa to the leader of one of America’s oldest allies, Mr. Biden signaled that he was ready to move on from an embarrassing spat that grew from a secretive American agreement with Britain and Australia to supply Australia with nuclear-powered attack subs, effectively canceling out a lucrative and strategically important French contract.

“I was under the impression that France had been informed long before that the deal was not coming through,” Mr. Biden said, effectively inviting his negotiating partners to shoulder some of the blame after weeks of weathering French ire. Later in the day, the two issued a joint statement that confirmed Mr. Biden’s support for America’s European allies to develop a “stronger and more capable European defense” as a compliment to NATO.

The meeting underscored the diplomatic challenges facing Mr. Biden abroad as he prepared for the Group of 20 meeting this weekend, where he will try to secure a global agreement to set minimum levels of corporate taxation, aimed at stopping companies from stuffing income into tax havens. He will also prod other countries to assist in uncorking supply chain bottlenecks, announce a global task force to fight the coronavirus and urge investments to curb global warming.

But his trip began with a private audience with Pope Francis at the Vatican, a diplomatic meeting that the president, who was grinning broadly as he emerged from his presidential limousine, seemed to enjoy.

After spending about 90 minutes with Francis in the Vatican’s Apostolic Palace, Mr. Biden told reporters that the pope had called him a “good Catholic” whoshould keep receiving holy communion.

The apparent show of support would mark the first time the pope has explicitly pushed back against a campaign by conservative bishops in the United States to deny Mr. Biden, a fellow Roman Catholic, the sacrament because of his support for abortion rights. Asked if the two had spoken about abortion, the president said no, but that the topic of receiving the sacrament had come up.

“We just talked about the fact he was happy that I was a good Catholic,” Mr. Biden told reporters, “and I should keep receiving communion.”

Asked to confirm Mr. Biden’s version of the exchange, Matteo Bruni, the Vatican spokesman, said the Holy See limited its comments to the news release about subjects discussed during the meeting and added, “It’s a private conversation.” 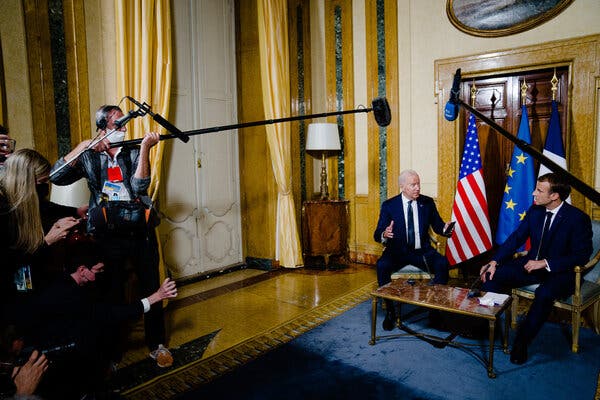 One drama-free meeting came later in the day, when Mr. Biden sought to strengthen relations with Prime Minister Mario Draghi of Italy. Mr. Draghi is becoming increasingly important as a European leader who believes that more European military independence can coexist with a solid commitment to NATO and a lasting alliance with the United States.

Mr. Biden told Mr. Draghi that he viewed a strong European Union — even one with a unified military defense — as in the interest of the United States, according to a person with knowledge of the conversation. At their meeting at the Chigi Palace, seat of the Italian government, Mr. Biden also said that Italy and the United States needed to show that democracies can function successfully, and that Mr. Draghi was doing that.

The White House did not return a request to verify those private remarks.

On a day that emphasized the importance of enduring relationships, the 75-minute, one-on-one meeting in the pope’s private library, followed by 15 minutes of niceties with family and officials, appeared to give Mr. Biden the biggest personal and political lift.

The Vatican did not allow public access to the meeting, citing coronavirus concerns, and released only heavily edited footage. It said in a statement that, in the private part of the meeting, Francis and Mr. Biden had focused “on the joint commitment to the protection and care of the planet, the health care situation and the fight against the Covid-19 pandemic, as well as the theme of refugees and assistance to migrants.” It added that the talks had touched on human rights and freedom of religion.

Antonio Spadaro, a Jesuit priest in Rome and a confidante of Francis, said that if Mr. Biden’s version of his exchange with the pope about communion was accurate, it was nevertheless “not a political statement,” as Francis’s entire goal was avoiding the politicization of the eucharist and the church, which he views as disastrous. Instead, Father Spadaro said, the pope would have been speaking as a pastor to a member of his flock. “This is pastoral to the person,” he said.

But, politically speaking, that distinction would make little difference to Mr. Biden, who has been a target of conservative American bishops, many apparently supportive of former President Donald Trump. They have argued that a Catholic politician, and especially a president, who supported abortion rights should not receive communion.

The Vatican had warned the American bishops not to pursue such a campaign, but they have pushed ahead anyway.

Since becoming president, Mr. Biden has declined to explain at length how he reconciles his Catholic beliefs with a conflicting view that abortion rights should be upheld as law. But he can now point to the highest authority in his church when challenged on his faith.

“You essentially have to take on not only Biden but also the pope,” John Carr, the co-director of the Initiative on Catholic Social Thought and Public Life at Georgetown University, said of the American conservative bishops who campaigned to have Mr. Biden’s rights to receive the sacrament denied.

President  Biden arriving for a meeting with President Sergio Mattarella of Italy (not pictured) on Friday at the Quirinale Palace in Rome.Credit…Erin Schaff/The New York Times

Mr. Biden has met with three popes during his time in public office, but Francis has made the biggest impression. The pope met privately with the Bidens during his 2015 trip to the United States, which took place about five months after the death of Mr. Biden’s son Beau. The then-vice president and his family were still deeply grieving, and that audience “provided us with more comfort than even he, I think, will understand,” Mr. Biden said at the time.

Mr. Biden arrived in Rome at a moment when the political polarization in America has become woven into its Catholic church. And the president and pope have become common targets of powerful conservative American bishops seeking to undercut them.

Massimo Faggioli, a theology professor at Villanova University and author of “Joe Biden and Catholicism in the United States,” said there was “no question” that American bishops would be angered by the pope’s encouragement, and wondered whether the president had cleared his decision to speak publicly about it with the Vatican.

The heavily edited footage released by the Vatican appeared to underscore the warm bond shared by the two leaders. Mr. Biden clasped the pope’s hand and called him “the most significant warrior for peace I’ve ever met.”

Biden Meets With Pope Francis Ahead of G20 Summit

President Biden and Jill Biden, the first lady, visited the Vatican for Mr. Biden’s private meeting with Pope Francis. During the visit, the president shared gifts and jokes with the pope. 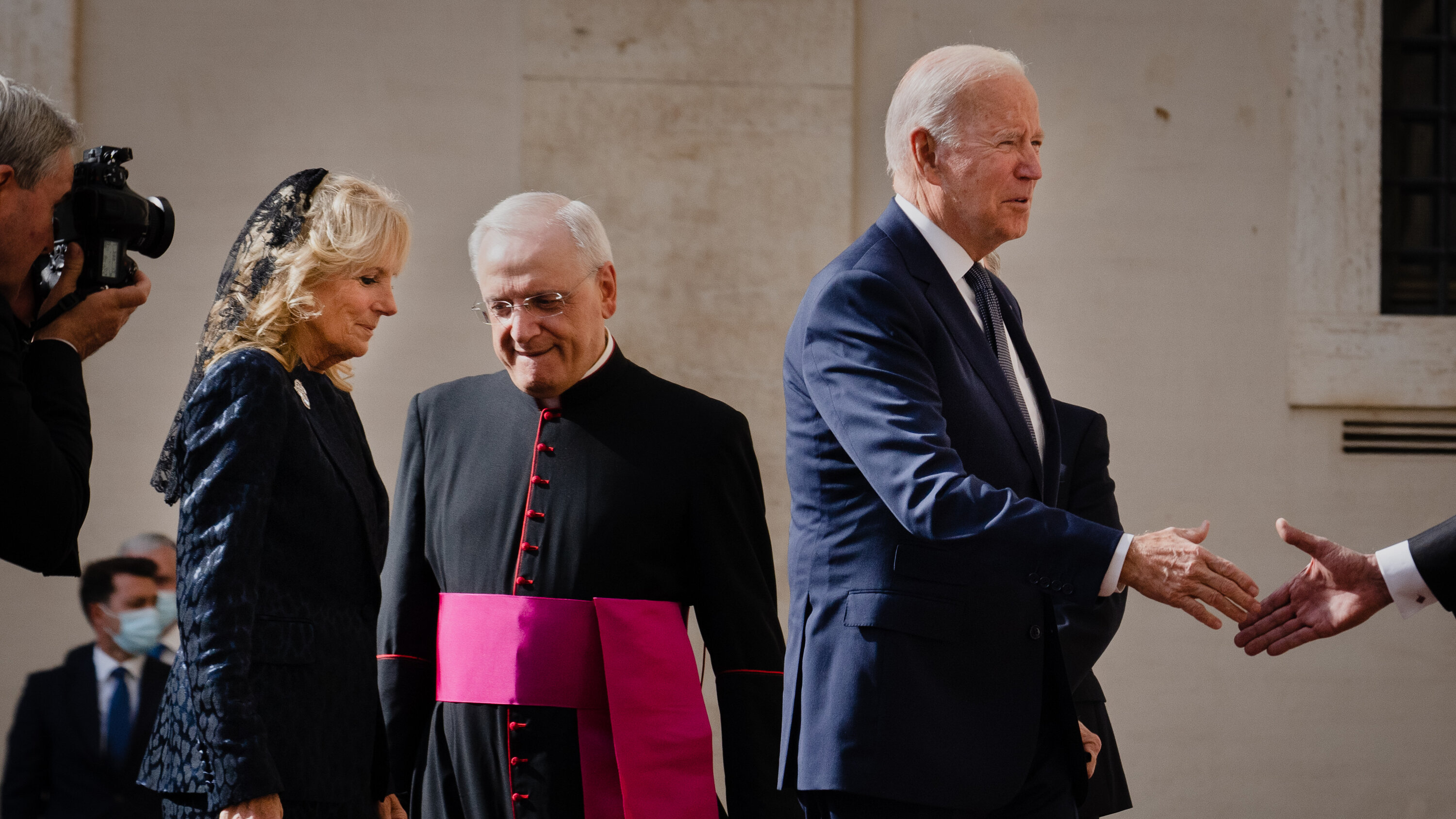 President Biden and Jill Biden, the first lady, visited the Vatican for Mr. Biden’s private meeting with Pope Francis. During the visit, the president shared gifts and jokes with the pope.CreditCredit…Erin Schaff/The New York Times

After their private talk they exchanged gifts, and Mr. Biden gave the pope a presidential challenge coin that featured Delaware, his home state, and Beau’s Army National Guard unit. “I know my son would want me to give this to you,” he said.

As Francis showed Mr. Biden and Jill Biden, the first lady, to the door, Mr. Biden was in no rush to leave.

He unspooled a folksy yarn that referred to both he and the pope ascending to their positions later in life. In a nod to their ages — he is 78 and Francis is 84 — he relayed a story about Satchel Paige, the legendary Black player who pitched the majority of his career in the Negro Leagues, and who was allowed to join the Major Leagues only in his 40s.

“Usually, pitchers lose their arms when they’re 35,” Mr. Biden said to the pope, who seemed a little lost by the baseball reference. “He pitched a win on his 47th birthday.”

As Mr. Biden explained it, reporters asked the pitcher: “‘Satch, no one’s ever pitched a win at age 47. How do you feel about pitching a win on your birthday?’” and the pitcher responded: “‘Boys, that’s not how I look at age. I look at it this way: How old would you be if you didn’t know how old you were?’”

The pope looked at Mr. Biden.

The Week in Business: Robinhood Fizzled as Silicon Valley Sizzled

Two Journalists Started an Argument in Boston in 1979. It’s Not Over Yet.

With ‘The Crown,’ Netflix Finally Takes the Emmys Throne