Review: Wagnerian Comedy Is No Joke in the Met’s ‘Meistersinger’

Canadian Wildfires Could Intensify from a Looming Heat Wave.

Yaya DaCosta Joins Elite Society in ‘Our Kind of People’

Where Do Theater Artists Go to Ask Questions? Poughkeepsie.

The Fall TV Season Is Back, Smaller Than Ever
Anasayfa » Güncel » Nick Cave Digs Deep, With a Symphony in Glass

Nick Cave Digs Deep, With a Symphony in Glass

On a blistering afternoon in late August, a dedicated crew of construction workers moved through the corridor connecting Times Square and Grand …

On a blistering afternoon in late August, a dedicated crew of construction workers moved through the corridor connecting Times Square and Grand Central Station, home to the 42nd Street Shuttle. Here, under the streets of New York, over two dozen figures made of vibrant glass danced along the subway walls.

On Friday, M.T.A. Arts & Design will officially unveil “Every One,” the first of a three-piece installation by the artist Nick Cave, inside the new 42nd Street connector. The other two parts — “Each One” at the new shuttle entrance and “Equal All” on the center island platform wall — will be installed next year. 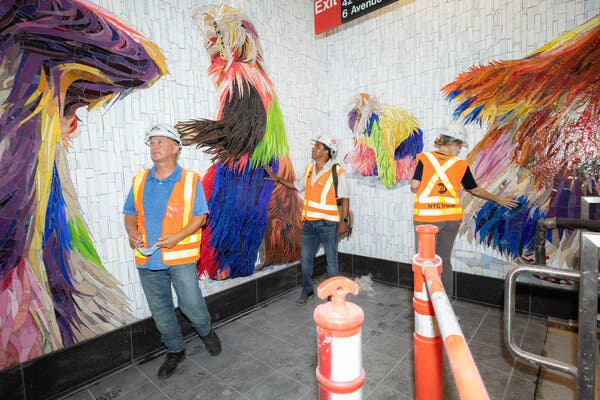 In August, M.T.A. workers inspected  Cave’s mosaic, “Each One,” inside the new 42 St connector, which links the Times Square-42 Street station to the Bryant Park station.Credit…Sinna Nasseri for The New York Times

The $1.8 million budget for the project, commissioned by M.T.A. Arts & Design, is part of the overall project to rebuild and reconfigure the 42nd Street Shuttle, which cost more than $250 million.

Cave — a sculptor, dancer and performance artist — is known for his Soundsuits, wearable fabric sculptures made of materials such as twigs, wire, raffia and even human hair that often generate sound when the wearer moves. (He’s also no stranger to staging art in train stations: In 2017, he brought a herd of 30 colorful life-size “horses” to Grand Central Terminal’s Vanderbilt Hall.)

Walking along the new and improved corridor, figures on the wall are depicted leaping and twirling in mosaic Soundsuits.

“​​It’s almost like looking at a film strip,” Cave said in an interview from his studio in Chicago. “As you’re moving down that from left to right, you see it in motion.”

Since the sculptor was selected from a pool of artists in February 2018, he wondered and worried: How would a dynamic, flowing Soundsuit transition into a static mosaic? He was relieved by the answer: Seamlessly.

When Cave came to New York to see “Every One” in early August, he said, “I felt like I was in the middle of a performance, up close and personal.”

“You just felt this fast, different, visceral texture,” he added, “the sensation in the movement and the flow of the material that completely resonated.”

When Cave came to New York to see “Every One,” he said, “I felt like I was in the middle of a performance, up close and personal.”Credit…Sinna Nasseri for The New York Times

The Soundsuits have always been an amalgam of cultural references, Cave explained: the concepts of shamans and masquerade, obscuring the race, gender and class of the wearer and forging a new identity. They contain ties to Africa, the Caribbean and Haiti.

“It’s very important that you can make references, you can connect to something,” Cave said. “In one of the mosaics in the corridor, there’s a sneaker. So that brings it to this urban, right-now time.”

From beneath a pink-and-black cloak of raffia, carefully crafted out of glass shards, pokes a contemporary sneaker in shades of salmon, white and maroon. Cave likes the play that’s happening here: The form is sometimes figurative, sometimes abstract. “Sometimes it’s identifiable and sometimes it’s not,” he said. “But that’s the beauty of it all.”

After completing the design for “Every One” in early 2020, the sculptor selected the fabricator Franz Mayer of Munich from a list provided by M.T.A. Arts & Design. His company, Mayer of Munich — one of the world’s oldest architectural glass and mosaic studios — understood Cave’s vision.

Mayer of Munich has been in the family of Michael Mayer, its current managing director, for generations. (Michael is Franz’s great-grandson.) Once the German fabricator gets to know the artist and their perspective, the team can translate the scanned designs of the work into a mosaic.

The artists, Mayer said, “they’re the people with the magic.”

Cave with one of his glass mosaic creations.Credit…Cheryl Hageman

The fabricator prints out the designs to-scale, lays them out on a table and works on top of them. Cave’s particular mosaic was done in a positive setting method, meaning the glass pieces were glued directly onto a mesh backing — rather than creating the design backward, like a mirror image.

“What is the stone that goes to the next, and creates a certain symphony?” Mayer said about the process. His team cut the glass pieces, applied them to mesh mats, and then the mosaic slowly and gradually grew outward. The finished piece measures about 143 feet on one side and 179 feet on the other, broken up by 11 digital screens in the middle. For three out of every 15 minutes, those screens will play videos of dancers performing in Soundsuits.

Shortly before the shutdown, Mayer visited Cave in his studio in Chicago. Then the artist came to see the work in progress in Munich.

Although this represented Cave’s first time working with mosaics, he is now more than interested in using the medium again.

“I’m thinking about mosaic as sculpture — not that it’s just on the walls, that it exists within space that you walk around the work,” Cave said. “So yeah, I’ve been thinking about it since I walked into that space.”

And at 42nd Street, his work will keep company with giants: Jacob Lawrence’s “New York in Transit,” Jack Beal’s “The Return of Spring” and “The Onset of Winter,” and Jane Dickson’s “The Revelers” are all glass mosaics in the Times Square station.

The finished piece measures about 143 feet on one side and 179 feet on the other, broken up by 11 digital screens in the middle. Credit…Sinna Nasseri for The New York Times

Roy Lichtenstein created his “Times Square Mural” in porcelain enamel. And Samm Kunce’s “Under Bryant Park” is a mosaic made of glass and stone.

“Times Square, it’s the center of the world, of the country,” Cave said.

Sandra Bloodworth, the longtime director of M.T.A. Arts & Design, emphasized the artist’s focus on other artists.

To have an artist who is “grounded in that be the work that we’re going to see as we return,” she continued, “as everyone comes back and the city revitalizes, the timing is just absolutely perfect.”

“Every One” is all about movement, Cave said. The glass dancers in their raffia and fur Soundsuits reflect the hustle and bustle of the more than 100,000 people who rode the 42nd Street Shuttle daily before the pandemic — up to 10,000 riders per hour.

At 42nd Street, Cave’s work will keep company with giants such as Jacob Lawrence’s “New York in Transit” and Jane Dickson’s “The Revelers.” Credit…Sinna Nasseri for The New York Times

On that blistering day in late August, the motion captured on the walls matched what was happening along the corridor under construction. A man in a hard hat sliced through stone in the middle of the hallway with a water-jet cutter. Another man carefully polished the freshly installed mosaic with glass cleaner and steel wool. Sweat dripped and workers buzzed around, building new tracks.

“We are not only spectators,” Cave said, “but we’re also part of the performance.”

She Was Music’s Greatest Teacher. And Much More.