Why Elite Female Athletes Are Turning Away From Major Sponsors

With Splendor and Saints, Hispanic Society Shows Its Treasures

Nobel Prize Awarded to Scientists for Research About Temperature and Touch

Building dams that flood land, the beavers have infuriated farmers. Some have obtained permits to kill the animals — setting off outrage among …

Building dams that flood land, the beavers have infuriated farmers. Some have obtained permits to kill the animals — setting off outrage among conservationists.

EDINBURGH — Wrapped inside a brown hessian sack, the baby beaver wriggled as it was carried to an examination table, but gave up the fight as a veterinarian deftly punched a microchip into its thick pelt and removed clumps of brown fur for samples.

“It’s stressful for the animal,” said Romain Pizzi, a wildlife specialist, as he extracted blood from the scaly flat tail of the male kit captured just a few hours earlier. Nonetheless, he added, this was a lucky young beaver.

“The alternative,” he said, “is that it’s going to be shot.” 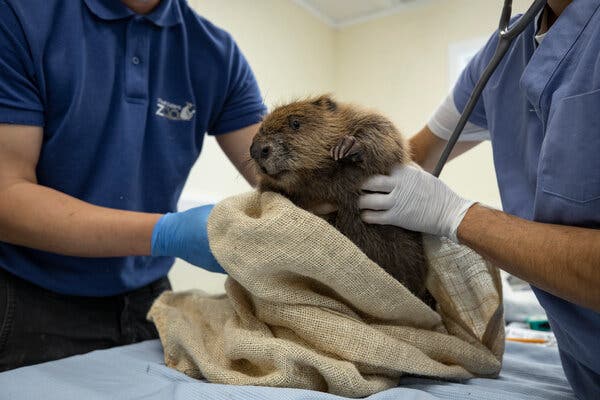 A kit being examined by Romain Pizzi, a wildlife specialist.Credit…Kieran Dodds for The New York Times

Four centuries after they were hunted to extinction, mainly for their fur, beavers are back in Scotland, and so is their age-old battle with humans.

Gnawing and felling trees, building dams that flood fields or wreck drainage systems and burrowing into river banks — sometimes causing them to collapse — beavers have incurred the wrath of a farming community, which won the right to request permits allowing them to kill the animals legally.

But the sanctioned killing of an otherwise protected species has enraged conservationists, prompting a legal challenge and igniting a polarizing debate about farming, biodiversity and the future of Scotland’s countryside.

Although there was an official trial reintroduction of beavers in 2009 in the west of Scotland, the animal’s return is primarily a result of earlier escapes or unauthorized releases of beavers imported privately, mainly from Bavaria or Norway. The growing population is most evident in the streams of Tayside, north of Edinburgh.

The five-month-old kit in the examining room, weighing in around nine pounds, had been caught in a trap in Tayside and rescued from what is called a “conflict area” — where, because of the damage the animals cause, farmers have won licenses to kill them. In 2020, they killed 115 of the animals, about 10 percent of a beaver population that now stands at roughly 1,000 across Scotland.

A beaver kit that was trapped and may be relocated to England.
Measuring a kit during a health inspection.

Animal rights advocates say that the once-native species is valuable for creating wildlife habitats and helping to preserve biodiversity, and they view the culling as a symbol of misplaced priorities imposed by intensive agriculture. But to their enemies, beavers are vermin whose mostly unplanned reintroduction to Scotland is causing needless damage and financial loss to food producers.

Flooding caused by beaver dams recently wrecked vegetables worth about 25,000 pounds, or about $35,000, said Martin Kennedy, the president of the National Farmers Union, Scotland, who said hardly a day went by without complaints in low-lying agricultural areas. To some members, it is “bigger than Brexit,” he said.

So contentious is the issue that it earned a mention in the new Scottish government’s draft policy program.

In Scotland, beaver territories, which vary in size but typically feature around four animals, have increased steadily — from 39 in 2012 to 251 in 2020-21, according to an official report. In 2019, beavers were given protected status, albeit with farmers able to apply for licenses to cull.

Now, a rewilding charity, Trees for Life, has challenged the Scottish government’s nature agency, NatureScot, in court claiming that it issues licenses too readily.

Martin Kennedy, the president of Scotland’s National Farmers Union. To some members, the issue is “bigger than Brexit,” he said.Credit…Kieran Dodds for The New York Times

“It’s quite a sad story and one that reflects how difficult it is to have grown-up discussions about these kind of land issues,” said Alan McDonnell, the conservation manager at Trees for Life.

In Tayside, some farmers blame the rising beaver population on escapes from Bamff estate in Perthshire, where Paul and Louise Ramsay run an eco-tourism operation. The Ramsays brought Scotland’s first recent-era beavers to the site in 2002, when there were fewer restrictions, as part of their own beaver rewilding project.

The idea was to restore natural habitats on their land after centuries of drainage designed to maximize farm yields. A significant transformation can be seen in a wild, scenic stretch of the 1,300-acre estate, which has been in the family since 1232.

Tall trees felled by beavers have crashed into pools of water separated by dams. Along the bank of a small river stood birch trees that were almost gnawed through; a few meters away a beaver could be seen swimming with a large clump of foliage in its mouth.

Paul Ramsay on his family estate. He and his wife, Louise, run an eco-tourism operation there. Credit…Kieran Dodds for The New York Times

Though the entrances to burrows are submerged, beavers dig upward into river banks to create chambers above water level. The dams they build regulate the water level of their aquatic habitats.

The 20 or so beavers living here have killed many trees, a point of contention for the Ramsays’ critics. But they have attracted otters, allowed water pools to fill with trout, frogs and toads, and given a nesting place in dead trees to woodpeckers, Ms. Ramsay said.

She said the problem was not the beavers, but farmers who think that any land that does not produce a crop is wasted.

“Their motivation is to drain, drain, drain, so a beaver comes along and wants to make a wet bit here or there — which might be a brilliant habitat — that’s against the farmer’s interest,” she said.

A beaver dam near Dunkeld. Credit…Kieran Dodds for The New York Times

Some beavers did escape from Bamff, Ms. Ramsay acknowledged. She claimed that by the time that happened, though, others had already escaped from a wildlife park some distance away.

The Ramsays took over management of the estate in the 1980s. In the late 1990s, Mr. Ramsay said, he became excited by the idea of introducing beavers at a time when he says the farming and fishing lobby had blocked an official trial project. He denies suggestions from critics that he deliberately let beavers escape to speed things up.

At his farm not far away in Meigle, Adrian Ivory was unconvinced. “Those animals have now escaped for whatever reason,” he said, “and the financial burden is not on the person who caused the problem but on us where the issue now is. They’re now being hailed as heroes for getting beavers back in and there is no thought about what damage it’s doing to our livelihoods.”

Adrian Ivory, a farmer near Perth.“If you rewild everywhere, where’s your next meal coming from?” he asked.Credit…Kieran Dodds for The New York Times

Beaver dams in a stream on his land must be removed regularly, Mr. Ivory said, because they threaten the drainage system in a nearby field and caused one year’s crop to rot. Burrowing threatens the stability of banks, making it potentially dangerous to use tractors.

Mr. Ivory said the damage may have cost him £50,000, including wrecked crops and labor costs. “If you rewild everywhere, where’s your next meal coming from?” he asked. “Food becomes a lot more expensive, or you have to import it.”

Mr. Ivory declined to discuss whether he had culled the beaver population on his land, but said he allowed the animals to be trapped for relocation, a task undertaken in Tayside by Roisin Campbell-Palmer, the restoration manager at the Beaver Trust charity.

She works with farmers, rising early in the morning to check traps, then relocating animals to beaver projects in England, where more than 50 have been sent. (Scotland does not allow the animals to be relocated within the country.)

Roisin Campbell-Palmer setting a trap near Perth. What the beavers are doing, she said, “is making us ask wider questions about how we are using the landscape.”Credit…Kieran Dodds for The New York Times

Ms. Campbell-Palmer said she found beavers fascinating and admired their dam-building skills, tenacity and single-mindedness. That said, she understands the complaints of farmers and admits that, having seen some particularly destructive tree-felling, has occasionally said to herself, “‘Of all the trees to cut down, why did you do that one?’”

As she inspected a trap filled with carrots, turnips and apples, Ms. Campbell-Palmer reflected on the ferocious debate and concluded that beavers had undeniably achieved one thing in Scotland.

“I think what they are doing,” she said, “is making us ask wider questions about how we are using the landscape.”

‘Cry Macho’ Review: The Good, the Bad and the Poultry

England will remove the last seven countries on its restricted-travel ‘red list.’

A Wall Street Dressing Down: Always. Be. Casual.
ZİYARETÇİ YORUMLARI