The Woman Who Captured ‘Jaws,’ Then Worked to Undo the Damage

Apartments Built on an Assembly Line

What if housing was built more like cars — on an assembly line in a factory? Rick Holliday thinks it should be. The longtime Bay Area developer …

What if housing was built more like cars — on an assembly line in a factory?

Rick Holliday thinks it should be. The longtime Bay Area developer turned a former Naval submarine factory into one that has been doing exactly that. Workers at Factory OS construct apartment building components on Mare Island in Vallejo, Calif., about 40 miles from San Francisco, then transport them on flatbed trucks to their final location. “By the end of the process it goes out the door and it’s a fully formed apartment that you put together like Legos to form a completed building.”

The process can cut the time it takes to build an apartment building in half, to roughly only 11 to 12 months, he said, with multiple parts of construction taking place at once in a controlled environment, which means fewer delays and a more streamlined process in general.

Mr. Holliday, who co-founded the factory with Larry Pace, said doing it this way, versus constructing a building on site, also cuts costs by as much as 30 percent. In the Bay Area, where the price of building a single affordable housing unit is close to $1 million, it can mean the difference between a developer building an apartment or not. 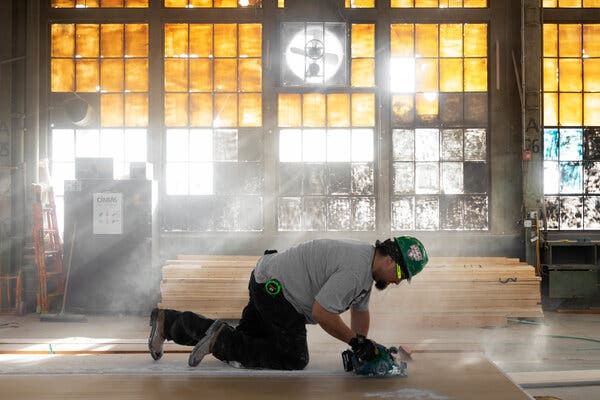 “I got into the industry at 26 and building is no different than when I started,” said Mr. Holliday, 68. “If we don’t take a different approach to building, we’re not going to get anywhere.” So far, Factory OS has completed 10 buildings for a total of roughly 1,200 units in Northern California and gotten financial backing from tech companies like Google, Autodesk and Facebook.

A year and a half after opening its doors, the pandemic hit. Even as demand for housing accelerated, construction stalled. Prices skyrocketed for crucial materials like lumber, even further increasing the cost to build and worsening California’s affordability crisis, particularly in the already pricey Bay Area, where the median price for a single-family home now tops $1 million. Nationally, home prices were up a record 18 percent in July over the same month last year, according to data from CoreLogic.

Mr. Holliday said the upshot is that more developers in this staid, traditional industry have been willing to experiment in an attempt to cut costs and get projects done quickly. As a result: “We’ve been flooded with work.” Factory OS has expanded to add a second factory right behind the first. The company has 24 more projects in the pipeline and is planning to open a third factory in Los Angeles in the next two years to meet demand in Southern California.

The Union, in West Oakland, is one of 10 completed projects built so far at Factory OS.Credit…Matthew Millman

They aren’t the only company trying to change how homes are built.IndieDwell, a three-year-old start-up based in Idaho, builds prefab, factory-built multifamily buildings, single-family homes and emergency housing. And there’s Blokable, a Sacramento-based company launched in 2016 to build and develop factory-built multifamily buildings. (Factory OS generally works with developers as customers, as opposed to developing and owning the buildings themselves.)

Stonly Blue, a San Francisco-based venture capitalist and an investor in Blokable, said a combination of factors from climate change to labor shortages have finally piqued the tech world’s interest in construction innovation. “The focus in recent decades has been software,” he said. “It’s slowly incrementing back to hardware and there’s nothing bigger and harder than buildings.”

Still, modular building is a concept that many have tried to innovate and failed at. Pulte Homes, one of the nation’s largest homebuilders, opened a prefab plant in the mid-2000s and then closed it in 2007 when the housing bubble burst. Katerra, a high-profile Silicon Valley-based prefab construction start-up that expanded very quickly and broadly, declared bankruptcy earlier this year. The company, which had factories in California, Washington and India, launched in 2015 and had $2 billion in funding and received a $200 million SoftBank cash infusion to try to save the business in December 2020.

Unlike at a traditional construction site, apartments built at the factory can be lifted and rotated to make them easier to work on.Credit…Matthew Millman

“I have total confidence that this is the way forward, but it’s really hard to get right,” said Randy Miller, a co-founder of RAD Urban, a Bay Area-based modular construction company that went out of business earlier this year.

To begin with, setting up a factory isn’t cheap, and the challenges are numerous. Unlike general contractors, who have low fixed costs, modular builders have to continue to pay to operate a factory even when business slows down and during lulls in between projects. “You can’t just flip a switch and turn on a factory,” said Mr. Miller, who plans to launch another modular building company soon.

Factory OS’s approach is a 33-step process and, much like building a car, it starts with the chassis, or the underneath part of the apartment block, which is filled with pipes and ducts for plumbing and electrical work.On a recent morning, at least a hundred workers wearing hard hats and masks hammered and sanded away at several long, narrow shells of apartments laid lengthwise like railroad cars. (The factory is roughly the length of three football fields.) It was a loud and dusty scene, but also orderly and efficient.

Some workers fit piping underneath a boxlike structure raised up on a rack so they could more easily reach low areas than at a typical construction site, where they would have to crouch underneath. Nearby, there werearms that could rotate the structures for easy access as well. On another side of the factory, neatly arranged components — from tubing to insulation to kitchen cabinets — sat on shelves. It looked like a very specific Home Depot display.

Another image of the Union, an apartment building in West Oakland. Factory OS has been so busy in the last three to five months they’ve had to turn away business in market-rate and luxury apartments.Credit…Matthew Millman

Factory OS is primarily focused on affordable housing — about 80 percent of what has been built here ranges from housing for the previously homeless to below-market-rate apartments for lower income workers, artists and students. The company takes on a handful of market rate and luxury projects too, but in the past three to five months, there has been so much demand that Mr. Holliday said he has had to turn away business.

Toward Factory OS’s entrance, a completed model apartment unit stood like a large box visitors could walk inside. The 25-foot by 12-foot studio had sturdy vinyl flooring, a two-burner stove, built-in kitchen cabinets and a stainless steel fridge. Behind a farmhouse-style sliding door there was a decent-sized bathroom. A gray Ikea couch in the living room could convert to a bed.

Mr. Holliday explained that the unit was similar to ones they built in a complex in Oakland to house previously homeless tenants. Two of these apartments plus the hallway space between them can travel on the same truck.

Mr. Holliday said one of his big challenges is finding enough workers to meet demand. “The labor force for building housing is shrinking,” he said. His solution? Hire and train people who may not otherwise find employment. About half of Factory OS’s unionized employees are “second chance” workers, including about 20 percent who have served time in prison.

Apartments laid end to end in the factory, which is roughly the length of three football fields. Credit…Matthew Millman

The pandemic has also exposed another downside of factory construction: Workers are in relatively close contact indoors. Factory OS now has a requirement that all employees get vaccinated by the end of September.

Though building facades can be customized, floor plans in factory-built homes need to be uniform. Every studio apartment, for example, needs to have the same layout to maximize efficiency in modular building. Mr. Holliday said he didn’t think that should stand in the way of building the housing we need, comparing the innovation of modular housing to the suburban standardization in Levittown, N.Y., which kicked off the construction of many of America’s suburbs to house young families after World War II. “We’ve allowed the design of buildings to get too complicated,” he said.

In the near future, the goal is to further streamline the process by creating even more standardized floor plans and designs that developer clients could basically pick from a catalog. Factory OS has partnered with Autodesk, a company that makes software for engineers and architects, to make interactive building plans that could guide workers as they go along, almost like a Google Maps version of an architectural drawing. It would also layer data findings from previous projects to maximize efficiency.

To avoid the fate of companies that have expanded too quickly, Mr. Holliday said he planned to keep his business a West Coastoperation. “My hope is that we become a stimulant for the industry,” Mr. Holliday said. “Not that we set up a lot of factories ourselves.”

Dobbs Ferry, N.Y.: A Mixed-Income River Town (but a View Will Cost You)