Finding a Home that Can Accommodate a Disability

A New Meaning to ‘Working in the Garden’

The Stress-Free Way to Hang Art

Want to Increase Your Home’s Value? Start With the Entrance.
Anasayfa » Sağlık » House Hunting in Canada: A Restored 19th-Century Farmhouse in Quebec

House Hunting in Canada: A Restored 19th-Century Farmhouse in Quebec

A Traditional Farmhouse With Updates in Quebec $1.21 MILLION (1.495 MILLION CANADIAN DOLLARS) Built in 1835 in a traditional Quebec …

A Traditional Farmhouse With Updates in Quebec

Built in 1835 in a traditional Quebec architectural style, this historic home sits on 1.76 wooded acres in the northwestern Quebec City borough of Haute-St.-Charles. The three-level house was restored and expanded by its current owners, who bought it in 2006.

“It’s rare to find a house this age outside of Old Quebec,” said Alexandre Boutet of Engel & Volkers Quebec, the listing agent. “In the suburbs, people treated these as tear-downs, so there aren’t many left.”

The property abuts the Wendake First Nations reservation, where the current owner, Gabriel Savard, was born. The land, he said, belonged to the tribe until the 18th century. The home’s backyard includes the Martel Rock, a huge stone formation “with many stories and legends,” Mr. Savard said.

Mr. Savard and his wife, Michele, “renovated everything in the house except the foundation,” he said, using local materials. The couple added a two-car garage in the same style as the house. A loft above the garage has two bedrooms, a bathroom and kitchenette.

The home’s front door opens to a bright great room with ceiling heights from nine feet in the dining room to 14 feet in the living area. A contemporary fireplace, open on four sides, anchors the great room, and full-length windows look out on the grounds. Just inside the front door, the couple installed a dry sauna.

The kitchen has a breakfast nook and artful built-ins, including a refrigerator and an oven concealed in cabinetry. A kitchen island faces a glass-enclosed fireplace next to the sink.

From a corner of the kitchen, a wood staircase ascends to the main bedroom suite, with an en suite bath behind pocket doors. Another bedroom and bathroom are tucked into the basement level, whose walls include the house’s original exposed foundation. The basement has a wine cellar, kept naturally cool by the foundation walls, and the floor was renovated using thousands of epoxied stones.

The Savards enhanced the land around the Martel Rock with a small saltwater pool, a waterfall and a network of paths and nooks. The property, which is being sold furnished, includes a shed behind the house for storage.

The house is an outlier in the Loretteville neighborhood of Quebec City, Mr. Boutet said. “It’s not a high-end suburb. Most of the housing stock is newer, and mostly young families are moving there.” 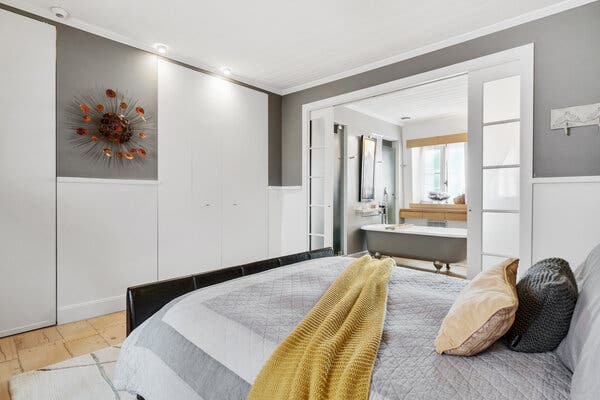 A wood staircase ascends to the main bedroom suite, which has an en suite bath behind pocket doors. Credit…Courtesy of Engel & Volkers Quebec

The downtown historic district is about a 25-minute drive south, and Jean Lesage International Airport is about 20 minutes southeast. “Quebec City is like a big village, so nothing is far away,” he said.

As in many North American cities, the pandemic bifurcated the housing market in Quebec City, Canada’s seventh-largest metropolitan area. The historic Old Quebec district “is probably the only place in Canada that’s been quiet,” said Martin Dostie, a realtor at Sotheby’s International Realty Canada in Quebec City. Condos, carved from low-rise buildings, make up the bulk of the housing stock, along with a few stand-alone homes. “You can now negotiate for properties downtown,” he said.

Outside the downtown core, “the market is hot, but still affordable for anyone outside this province,” said Tom Donovan, a broker and team leader of the Donovan Team/ReMax Access in Quebec City. “People want space, so properties on big lots, or near lakes, are in high demand.”

In a market where listings once generated moderate activity, “one in three listings now goes into a bidding war,” Mr. Donovan said. “We never saw this before Covid.”

The shrinking inventory and soaring prices worry some observers. “This mismatch in supply and demand is becoming an issue in some localities, because local incomes can’t really manage the extra prices getting created,” said Michael Simard, principal economist at the Quebec Professional Association of Real Estate Brokers (QPAREB).

Sales volume in the third quarter of 2021 fell 32 percent from the same quarter last year, according to a QPAREB report — an indication of the extraordinary activity in 2020. From September 2019 to September 2021, home prices in the region rose 24 percent, Mr. Simard said. “The market is still hot, but cooling compared to 2020, which was an outlier,” he said.

Another bedroom and bathroom are tucked into the basement level, whose walls include the house’s original exposed foundationCredit…Courtesy of Engel & Volkers Quebec

By contrast, the median price for a single-family home in Montreal in September was 504,500 Canadian ($408,000), with median condominium prices at 365,000 Canadian ($295,000), according to QPAREB. The average price for a detached home is close to 1.8 million ($1.45 million) in both Toronto and Vancouver, according to local real estate boards.

Quebec City’s downtown market is an opportunity for investors, said Mr. Dostie of Sotheby’s. “Values will go back up once tourism resumes.” But he cautioned that the city’s stringent new rules around Airbnb rentals may disqualify many condo units in the historic district.

Investments in the region should also boost the market, Mr. Viel said. In 2023, construction is expected to start on a long-delayed, $3.3 billion tramway through the city, and some investors have already begun speculating on property along proposed routes, said Bryan Peladeau, co-owner of the Peladeau Real Estate Agency in Quebec City.

Who Buys in Quebec City

The rampart walls around Quebec City’s historic district also divide buyers. Inside Old Quebec, nearly 40 percent of properties are owned by foreigners, according to Mr. Boutet, the listing agent. “In the rest of Quebec City, it’s detached homes and local buyers,” he said.

The home’s backyard features a huge stone formation that the owners adapted into a saltwater pool and sitting area. Credit…Courtesy of Engel & Volkers Quebec

A steady stream of American buyers tapered off during the pandemic, Mr. Peladeau said, leaving space for buyers from Montreal, Ontario and British Columbia, mostly seeking second homes downtown. “They haven’t taken the place of Americans, but it’s been significant,” he said. Since Canada reopened its borders to American citizens in August, a few American buyers have returned, he said.

Unlike Montreal, where English competes with French in daily life, Quebec City remains predominantly French in language and culture. “It’s not an easy place to adapt,” Mr. Donovan said. “We get a lot of buyers from Francophone countries.”

There are no restrictions on foreign buyers of residential property in Quebec, according to Richard Burgos, a lawyer specializing in real estate at the Lavery law firm in Montreal. Non-Canadians are restricted from buying agriculturally zoned properties, however, “so an attractive cottage on a farm might not be allowed.”

In Quebec, both notaries and lawyers can draft real estate contracts and execute transactions, though “using a notary is common practice,” Mr. Burgos said. If the purchase involves a mortgage, the law requires a notary to handle the transaction. Most closings can now take place virtually.

Notary fees range from 1,200 to 1,400 Canadian dollars ($900 to $1,150), said Julie Côté, director of nonresident taxation at the accounting firm FL Fuller Landau LLP. Many international buyers pay in cash, since “some banks refuse to lend to foreigners,” she said.

When non-Canadian buyers opt to finance a purchase, banks typically require a minimum 35 percent down payment, Ms. Côté said, while Canadian buyers can put down as little as 10 percent.

A power-of-attorney designation, which is necessary for virtual transactions, adds about 450 Canadian dollars ($365). According to Mr. Burgos, hiring a lawyer costs from 1,000 to 3,000 Canadian ($810 to $2,430), “depending on the complexity” of the transaction. Agent commissions run 4 to 5 percent, according to Mr. Boutet.

The sellers added a two-car garage in the same style as the house. A loft above the garage has two bedrooms, a bathroom and kitchenette.Credit…Courtesy of Engel & Volkers Quebec

In January 2022, the Canadian government is expected to enact a 1 percent tax on foreign owners whose property remains vacant for six months or more, Ms. Côté said. “They are targeting foreigners who hold property solely as an investment,” she said. “These vacant properties create a bubble in a market where there’s nothing available to rent or buy.”

What’s the Best Way to Sublet My Apartment?