A Million Afghan Children Could Die in ‘Most Perilous Hour,’ U.N. Warns

French leaders call for vigilance amid vandalism at vaccine sites.

Why Amazon Is in Business With Judge Judy

BIRMINGHAM, England — Kirsty Griffiths’ delight was evident as she held a pair of 22-karat gold bands, newly refashioned from her grandfather’s …

“One for me and my own wedding and one for my auntie,” Ms. Griffiths, 31, said recently inside a cramped jewelry workshop here. “My granddad had left the original one to her.”

The rings now bear the anchor-shaped Birmingham Assay Office hallmark certifying the purity of the gold and the LL insignia of their maker, Lora Leedham.

Ms. Leedham, 35, is part of a generation of independent craftspeople working alongside large heritage companies in the gentrifying neighborhood known as the Jewelry Quarter, a hub for makers since the 18th century. 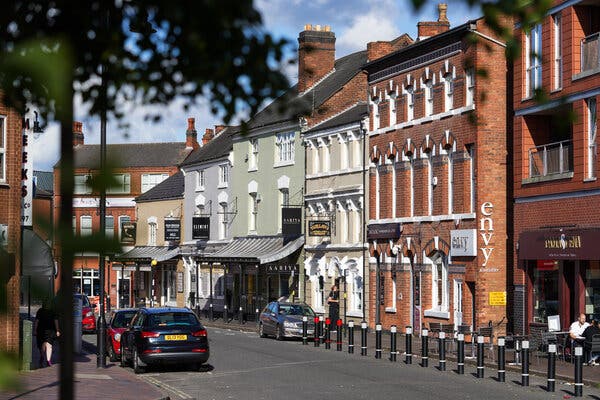 Visitor guides say about 40 percent of all the jewelry made in Britain today is created in the quarter (although no one interviewed for this article could confirm that number). But many in Britain consider the neighborhood — which covers about 270 acres in this multicultural city of more than 1.1 million in the West Midlands region — worth the trip to shop for bespoke items like wedding and engagement rings.

The Jewelry Quarter Development Trust, a group working to revitalize the quarter, estimates that more than 800 jewelry-related businesses, including more than 100 retail shops, operate in the area. They provide jobs for 4,000 people, according to Ben Massey, marketing director for the National Association of Jewelers, which is based here, too.

The trust’s heritage walking trail guides visitors through the mix of old and new storefronts and other points of historical interest. At the Museum of the Jewelry Quarter, visitors can reserve “time capsule” tours that show the museum’s two-story, Victorian red brick building as it was on the day in 1981 when the Smith & Pepper jewelry company closed after more than 80 years at the site.

The quarter also is home to the School of Jewelry, established in 1890 and now part of Birmingham City University, which said that the school’s annual 400-to-500-student enrollment makes it the largest such school in Europe.

But the quarter has been changing, with trendy hotels and organic-food cafes moving in and vacant low-rise brick warehouses being turned into luxury apartments, leading many jewelers to express concern that the trade is being pushed out as spaces are rescued or repurposed and rents inevitably rise.

The trust’s website, for example, shows a developer’s project, totaling 258 million pounds, or $358 million, to turn a parking lot into “a brand-new neighborhood, including a 39-story tower.” Another developer is turning a derelict pub called the Gothic and neighboring buildings into apartments, a restaurant and a boutique hotel along with what the project’s marketing describes as “commercial/creative spaces” occupied by “local and independent trades.”

Inside Ms. Leedham’s studio. The jeweler said she was taught “the old-fashioned way, with a saw and a file.”Credit…Jane Stockdale for The New York Times

A Birmingham City Council spokesman issued a statement that said: “We welcome investment and new developments in Birmingham, and the council is committed to achieving inclusive growth that benefits everyone in all of our communities. We will continue to do everything we can to ensure this is the case through our involvement in the ongoing regeneration of the Jewelry Quarter and other parts of the city.”

Ms. Leedham has, at least so far, avoided having to move.

“I don’t have a big shiny, posh workshop,” she said. “I have a dusty, Victorian workshop with history and memories and broken windows and people who visit love it because it’s authentic and I believe that’s how it should be. I handcraft everything; that’s massively important, too.”

The jeweler said she was taught “the old-fashioned way, with a saw and a file.” Her wooden workbench is covered with tools: files, hammers, tweezers, burrs for drilling, a doming block for shaping metal and a gas flame. The bench itself “belonged to the jeweler who was here for 40 years before me and it has got to be like 100 years old,” she said.

But the building where she has been making jewelry since 2006 has a new owner. Fortunately, she said, the company is “just moving us upstairs to new workshops and say they’ll keep the rent the same for the next two years. They’ve been really kind.”

Jubran Shefik, a goldsmith, at James Newman’s showroom in the Jewelry Quarter.Credit…Jane Stockdale for The New York Times

Being in the quarter has also been important for the independent maker James Newman, 45, who began by selling pieces at art fairs and trade shows but who now has several employees in his workshop and a sleek ground-level retail showroom.

“When people come through our door, we look and feel a bit different — a bit like the restaurant where you can see the food being made,” he said during an interview alongside his dog, Fudge. “You can see that we have a workshop. You can hear the workshop.”

“More people are more interested in a piece that’s got more meaning than just buying it off-the-shelf,” he said. “They like to know that someone has made a piece for them or with them. They like to know who that person is. I really like the fact that you can be part of someone’s story.”

Mr. Newman has several employees in his workshop and a sleek ground-level retail showroom.Credit…Jane Stockdale for The New York Times

One display case contained pieces like a ring with a textured, hand-forged platinum band and a pear-shaped gray diamond. Another held a silver pendant with 18-karat yellow gold welded to the surface. Prices for items on display ranged from £380 for a tourmalated quartz birthstone ring to £10,500 for a 2-carat salt and pepper diamond and platinum ring.

“If you are looking for a classic design, say a four-claw Tiffany-esque ring with a white diamond, then the Jewelry Quarter is very good because every shop has the same design and they are competing on price,” he said. “But for the people who come through our door, it becomes fairly apparent fairly quickly that we’re not just buying stuff in; we’re not mass-manufacturing anything.”

Mr. Newman sees pros and cons to the changes in the quarter. “Twenty years ago very few people lived here, it was so very industrial,” he said. “Now it’s become a very cool place to live. There’s more bars, more restaurants, more of a night scene. Twenty years ago after 5 p.m. you’d be quite concerned about walking around some of the streets.”

Still, he finds it “frustrating” that many of the quarter’s old buildings are not being maintained, “then developers will come in and keep a facade and build 600 flats behind it.”

The Jewelry Quarter is changing, with trendy hotels and organic-food cafes moving in and vacant low-rise brick warehouses being turned into luxury apartments.Credit…Jane Stockdale for The New York Times

For independent makers who don’t have a street-level display window like Mr. Newman, word of mouth is especially important. Kate Smith, 43, whose first workbench was in her parents’ garage but whose studio is now one floor above Mr. Newman’s, specializes in nature-inspired designs for alternative wedding, engagement and eternity rings.

“We are tucked away behind the scenes, so you wouldn’t necessarily know we are here,” she said, “but I kind of like it that way. It makes a client’s visit extra special for them.”

She couldn’t imagine not working in the quarter, she said. “This is the busiest year I’ve had. We’ve got a lot of my gemstone suppliers and metal dealers here so it’s massively convenient. It has changed, but it still feels like you are part of the fabric of the area.”

For couples who want to make their own wedding bands, there’s the Quarter Workshop, run by Victoria Delany, 39. Held in a studio inside a former coffin factory and now museum, the daylong course costs £480 plus materials, which can vary from around £65 for a thin 9-karat gold band to more than £600 for a chunky one in 18-karat gold.

Her workshop is on a street busy with new construction and, she said, “There is an underlying feeling that perhaps some of the trades are going to be pushed out of the area and it’s becoming something else.”

And the environment already has changed in some ways, she said. “When you walk around the quarter, you can also see a lot of storefronts selling very similar things,” she said, “with a sort of ‘we’ll beat any price’ kind of style which doesn’t give you the full story of the quarter and the artisans who are here.”

Some of the larger heritage brands still remain, of course.

A workshop at Deakin & Francis, which operates in the building where it was founded in 1786.Credit…Jane Stockdale for The New York Times

Henry Deakin, 39, is managing director and the seventh-generation family member to run Deakin & Francis. Its factory, which specialized in men’s accessories like enameled cuff links and gold signet rings, still operates in the building where it was founded in 1786.

“We’re a bit of an iceberg here,” he said. “There aren’t many other British manufacturers like us left in the Jewelry Quarter.”

The company says 25 percent of its £3.5-million annual business comes from the United States, working with brands like Bergdorf Goodman, Tiffany & Company and Ralph Lauren. It also manufactures for British and European names like Asprey, Garrard and Cartier.

The boardroom at Deakin & Francis in the Jewelry Quarter.Credit…Jane Stockdale for The New York Times
The company has long specialized in men’s accessories like cuff links and gold signet rings.Credit…Deacon & Frances

The company has opened a retail store in the Piccadilly Arcade in the St. James’s neighborhood of London; has plans to introduce a new line of women’s gemstone jewelry in September; and hopes to open what Mr. Deakin called a “behind the scenes” visitors’ center within 18 months.

Gentrification is “a hot topic at the moment,” he said. “The sensible thing for us to do would be to sell our building tomorrow, move out to somewhere, have a purpose-built, very slick factory.

“But that’s not really what we’re about. We’re lucky enough to own our building, although it’s tempting when the developers start giving silly numbers. Our heritage and history are here and I think we’ll lose that charm if we do move. Once it’s gone, it’s gone.”

And there are plenty of reasons to stay, he said: “The assay office is around the corner; the craftspeople are local to here. What will happen in 10 or 20 years, I couldn’t say. This building is a bit damp, a bit dusty, but it’s our home.”

The Missing Piece in the Push for Boardroom Diversity