Is the Party Over or About to Begin?

The Watch From Outer Space

A Home That Retreats Into the Brazilian Savanna

Designers often use the word “storytelling,” which can be a polite way of saying nothing. But Giancarlo Valle means it more specifically, as in a …

Designers often use the word “storytelling,” which can be a polite way of saying nothing. But Giancarlo Valle means it more specifically, as in a fairy tale. Valle, who creates soft, pared-down interiors and things to fill them, practices a strain of modernism dosed with whimsy — squat, oblong tables with mosaic tiled tops that resemble tortoise shells; stubby tearoom chairs upholstered in nubby chenille that recall the bottom half of a faun; velvet couches the color of tree bark that wind on for longer than would seem strictly necessary, all of which would look at home in a stylish storybook cottage, possibly one tucked within an enchanted forest. So it can be surprising to learn that Valle, 39, trained as an architect, a discipline that demands icy rigor, and worked for a number of years for some of the field’s most influential practitioners, including the firms SHoP and Snøhetta. In many ways, his own practice, which he started in 2016, is an effort to unlearn architecture’s cool remove, with which he grew disillusioned, in favor of something warmer.

Valle, with two tables from his new collection — one made of cherry and the other of glazed stoneware and zinc — in the raw space of an Upper East Side townhouse he’s currently renovating.Credit…David Chow
A Valle-designed daybed fashioned from saffron mohair and a scrap from a silk rug.Credit…David Chow

“It became so siloed,” he said, seated in his Chinatown studio, a small workshop whose walls are sheathed in olive velvet, his team quietly puttering around him. “From studying architecture and then right into an architecture job. Or you’d maybe never practice but you would write a lot. That’s probably why I went in the opposite direction. I just thought that it used to be more, you know?”

Valle, who grew up between San Francisco and Chicago with stops in Guatemala City and Caracas, yearned to lavish the same level of attention on interiors as his peers did facade work. He was drawn to figures like Gio Ponti and Carlo Scarpa, designers whose self-defined remit was so multihyphenated as to feel endless, gliding fluidly between buildings, hardware, furniture, lighting and myriad other locus points. “In a way, I’m trying to bring that sort of sensibility back,” Valle said. “You could start with an object and build a room story around it, or with the architecture and work toward the object,” he said. “There’s a return to questioning the limits of things.” 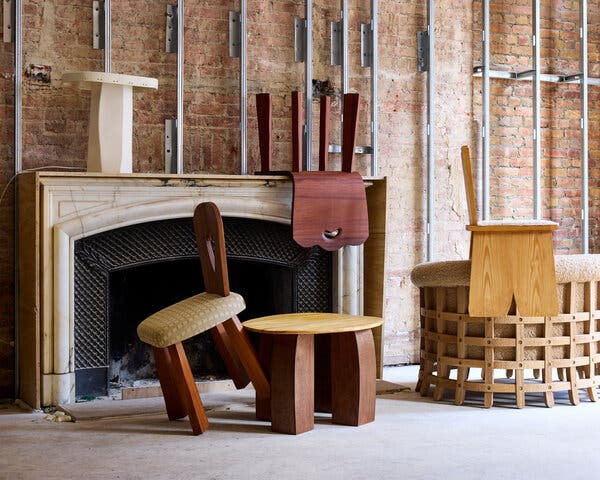 From left, Valle’s Plateau lamp; a carved wood dining chair and side table; an upended Roman chair; and a Folk chair that rests upon the designer’s Cage armchair, which is upholstered in a mohair and alpaca bouclé.Credit…David Chow

Thus far, Valle has applied that sensibility to a varied diet of private residences and commercial spaces, from Upper East Side townhouses to a Tulum hotel. In the entryway of the artist Marilyn Minter’s studio in Cold Spring, N.Y., he devised a geometric crash of rectangular wood forms that serve as a deconstructed coat closet; through Altuzarra’s Madison Avenue boutique in Manhattan, he snaked a waist-high display stand clad in chalky Danish brick, its elongated wave echoed by a 16-foot-long cream-colored wool sofa studded with oversize tennis ball-like cushions. These are forms that should be too playful to be elegant but manage to be both.

Curves are particularly important to Valle, and he likes to insert them wherever possible: a plastered stairwell guard wall, the back of an upholstered banquette that folds in on itself. His Smile chair, which echoes traditional carved Ethiopian pieces, seems to do just that, its deep half-moon of a seat beckoning a sitter with the primigenial familiarity of a cradle, or a womb. 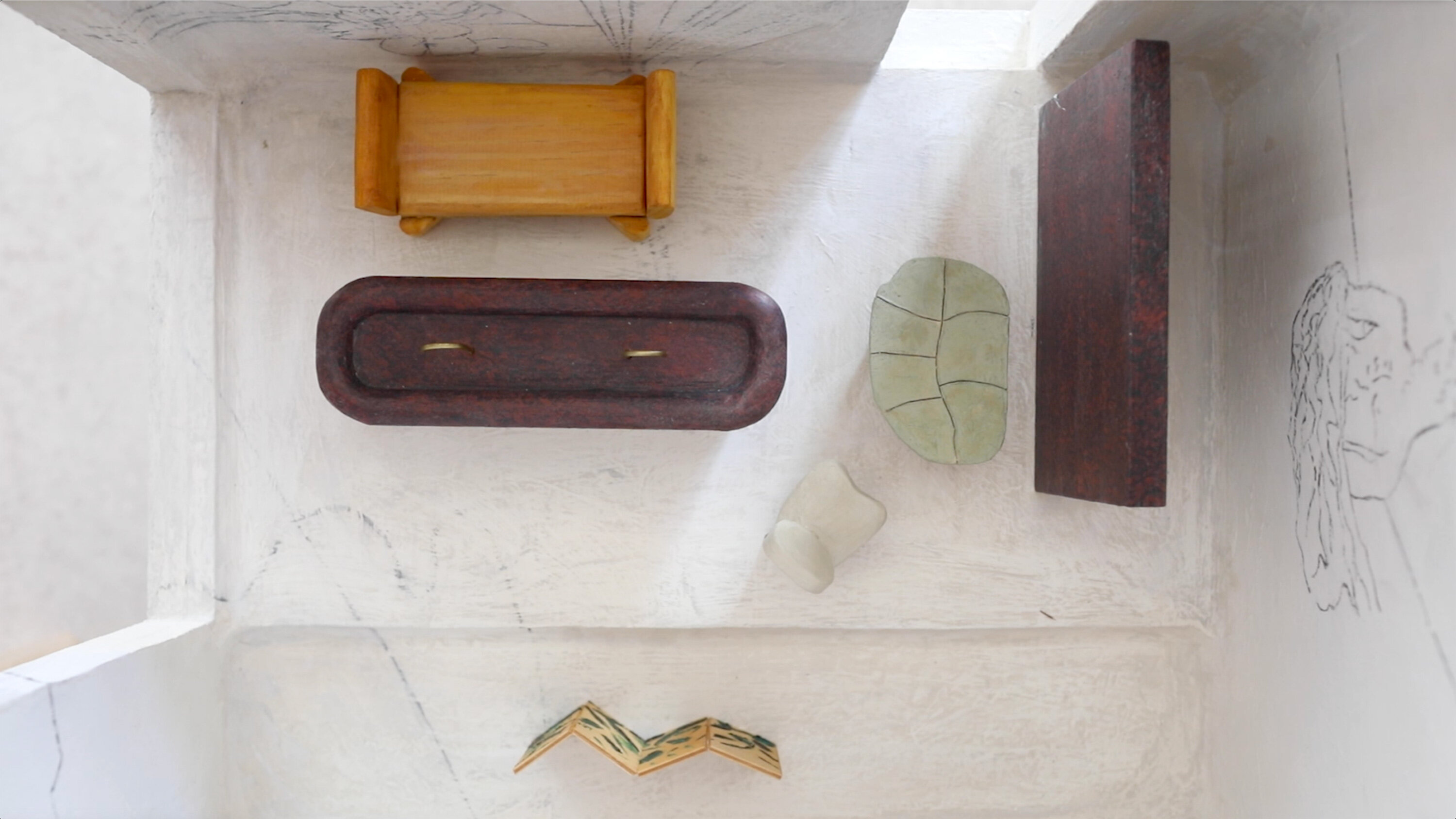 Valle’s model of a bathroom with a free-floating sink, a vibrant daybed and what would become a wooden screen.CreditCredit…By David Chow

One of the charming aspects of Valle’s practice are the maquettes he makes of his pieces, a habit that came out of architecture’s reliance on models. But Valle’s models are handmade, and look like it. Indeed, the miniatures — lumpen clay armchairs and occasional tables that Valle arranges and rearranges inside shoebox versions of their ultimate destinations — are closer to dollhouse furniture than to showpiece renderings. For Valle, this is a more effective way to sketch, less to account for exact dimension than for mood.

A diorama of a space in progress, the great room in a former orphanage in Chicago that’s being converted to a private residence, is perched in a corner of the studio. The scale makes it sweet, until you register the intense detail, down to minuscule iterations of the dozens of reliefs the New York City-based ceramist Matt Merkel Hess is making to pepper the vaulted, jade-colored ceiling. “You have to edit with the model, you have to make decisions to be able to explain the idea in a concrete way,” Valle said. “It’s this very free way of moving.” The realized versions of his pieces are uncannily faithful to their modeled beginnings. “How do we recreate that playfulness, or how do we get that handmade quality?” he added. “Ultimately, the computer does play a role, but I like that there’s a naïve entry point.”

A series of the maquettes that Valle makes to articulate his ideas. At bottom left is one of the great room in a former Chicago orphanage that is being converted to a private residence.Credit…David Chow

Valle is also preparing for an exhibition of his furniture that will open at Magen H Gallery, in Manhattan’s Greenwich Village, later this month. He describes the show, which will pair 11 new pieces with their archival inspirations, as a conversation between the contemporary and the historical: Valle’s sculptural zinc sconces, their interiors hand painted with custom enamel, will be set against their Le Corbusier-designed forebear; a graceful daybed upholstered in saffron mohair, a scrap from a silk rug grafted to its seat, will share space with Michel Chauvet’s rippling “Poisson” table; and a faceted stoneware lamp (a collaboration with the ceramist Natalie Weinberger, who also makes the tiles for Valle’s tortoiseshell tables), mocked up in cardboard and then slip-cast so that the finish retains the paper’s irregularities and resembles something primordial, like a fossilized bone exhumed and wired for halogen bulbs, will wink at a bulbous ceramic pitcher by Jean Lerat. Many of the pieces in the show are from Valle’s new body of work, which marks his first full-throated retail offering, a formal debut that, because he’s used to creating site-specific pieces, has been “a little like this slow burn.”

“I wanted to take a longer arc to the furniture,” he said. “Usually, we come up with pieces sort of as they come out of the oven. They’re very specific to projects and they’re named after clients, but there’s ultimately a language that joins them.” That language, a primitive modernism of carved wood, an earthy palette, low profiles and raw edges, is enjoying a certain vogue in the design world. It’s practiced by firms like Green River Project, with which Valle frequently collaborates. “There’s a set of ingredients, but the recipes we’re always playing with,” Valle said. “An idea can have nine lives, and it can take on many different forms, but there’s a continuity in how they’re [all] composed. The forms and the shape and the proportions can be super free.”

He Was Coughing Up Blood. But His Lungs Looked O.K.

How to Let Your Mind Wander
ZİYARETÇİ YORUMLARI