A Brief Introduction to Philosophy (Through a Certain Sex Act)

The Park Bench Is an Endangered Species

How to Play Drunk

The Ephemeral Beauty of Night-Blooming Flowers

Everything in Carla Sozzani’s Home Has a Story, Including Her Cat
Anasayfa » Magazin » The Immortal Myth of the Unicorn

The Immortal Myth of the Unicorn

In the fourth century B.C., a Greek physician named Ctesias described an animal that would become known as the unicorn: a large, pale blue-eyed …

In the fourth century B.C., a Greek physician named Ctesias described an animal that would become known as the unicorn: a large, pale blue-eyed ass with a crimson head and a horn of white, red and black, found only in India. Likely created from stories he heard while stationed in Persia (modern-day Iran), Ctesias’ “Indica” — a written catalog of the unknown world — shimmers with the sublime and the absurd: notes on a race of people with a single leg; descriptions of chimeric beasts. But it was the unicorn, possessor of what Ctesias described as a cinnabar-red anklebone, that remains his most enduring contribution. (The scholar Chris Lavers, author of 2009’s “The Natural History of Unicorns,” has written that Ctesias assembled the unicorn out of three animals indigenous to the region: the Indian rhinoceros, whose horn is associated with medicinal properties; the goatlike, horned chiru; and the reddish-and-white-colored kiang, a large wild ass.) 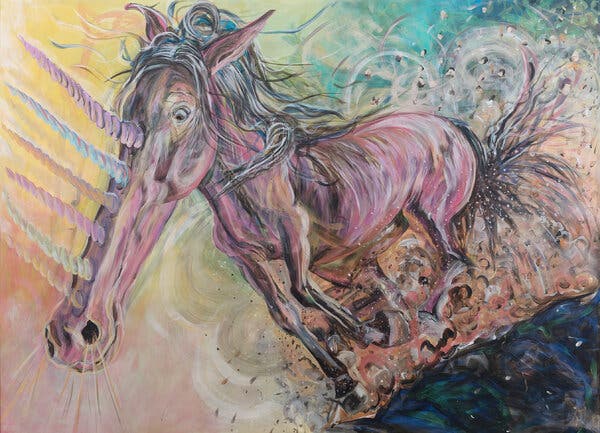 Future Western historians and writers, from Aristotle to Marco Polo, scoffed at Ctesias’ confabulations, while grudgingly referencing them as well. Yet the unicorn, with its improbable magic, continued to find fresh interpretation over the generations; five centuries after its origin, around A.D. 77, Pliny the Elder described a similar horned animal, the monoceros, using a word that in the Bible referred to a wild ox. The Latin Bible turned the Greek “monokeros” into “unicornis.” In the 17th century A.D., its appearance in the King James Version of the Bible helped legitimize the unicorn, by then a white-bodied equine mystic, tamed only by a virgin’s hands. Its horn could purify water and cure epilepsy. Medieval and Renaissance painters depicted unicorns nestled in the Virgin Mary’s lap — a symbol of purity and beneficence.

Today, unicorns canter through the works of Lewis Carroll and Shel Silverstein, out of “My Little Pony” and into the “Harry Potter” series. They exist on the science fiction television show “Battlestar Galactica” (1978-79) and in a 2013 short film starring Lana Del Rey. In 2017, the American fashion designer Thom Browne sent a gauzy puppet version down a Paris runway. It presides as Scotland’s national animal, emblematic of the country’s stubborn bravery. The very word has been co-opted: In Silicon Valley, the term “unicorn” symbolizes a billion-dollar start-up. In open sexual arrangements, a unicorn is a couple’s third lover. Its enchanting otherness has made it a queer icon. A recent show at Greene Naftali in New York by the German painter Jana Euler offered a different interpretation: Her “Morecorns,” with their monstrously long snouts and multiple horns, recall deformed animals at a traveling circus — a novelty item, a way to sell tickets, their mutations the result of human intervention.

Yet why, precisely, does the unicorn persist in our collective imagination, and why does it feel especially relevant now? Perhaps it helps to return to Ctesias, who described a beast able to outrun her pursuers, impossible to capture unless encircled by an army of men and horses. She would rather fight — with her horn, teeth and hooves — and die free than live as a captive. The unicorn stands for our own desire to be seen as extraordinary. She allows us to believe that we, too, are special — if only we were allowed to live unconstrained, if only we didn’t have to conform ourselves to fit into the world around us. She is the ultimate rare being: a wild spirit we discern in ourselves, one that can bring both destruction and relief, violence and healing. Given our rising sea levels, ongoing wars and the ambient uncertainty of the now, we’re ever more aware of how precarious the world really is. Yet we continue to survive, even as the structures that we’ve created crumble before our eyes, leaving us alone as we always were, in the woods.

Did They Really Make It Rain Over Dubai? Does It Matter?

An Artist’s Life in Objects, From a Warhol Print to a Postmodern Lamp

A Classic Valise Gets a Silvery Sheen

Should I Help My Aging, Ailing Dad Access His Toxic Web Feed?

Do We Really Want Nonstop Action From Football?
ZİYARETÇİ YORUMLARI