18:00 The Offspring’s drummer says he was dropped from the band over being unvaccinated.

16:24 5 Things to Know About the Cuomo Sexual Harassment Findings

16:00 A wildfire in Greece burned dozens of homes amid a searing heat wave.

Italians Stun Even Themselves in 100 Meters and High Jump

With Durant on His Game, U.S. Storms Into Olympic Semifinals

Medals On, Masks Off

On a Refurbished Knee, Brazil’s Andrade Vaults to a Gold Medal
Anasayfa » Spor » What’s Ahead for the Pac-12? 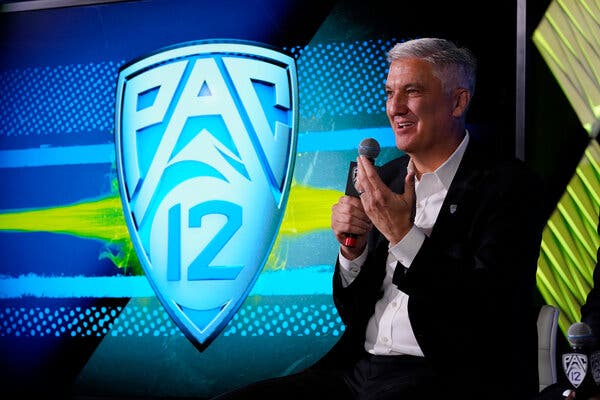 Many of the eminences of the Pac-12 Conference — athletic directors and football coaches and top players — gathered at a Hollywood hotel on Tuesday to preview the coming season, which is scheduled to begin when U.C.L.A. hosts Hawaii at the Rose Bowl on Aug. 28.

On the football fields and in the accounting offices, it has been a harrowing run for California’s most powerful college sports conference. Although the league enjoyed star turns during this year’s men’s and women’s basketball tournaments, the conference, which counts Cal, Stanford, U.C.L.A. and Southern California among its members, has not appeared in the College Football Playoff since 2016.

Its payouts to its schools are among the lowest in big-time college sports. Its television network has yet to deliver on its money-printing ambitions. Its longtime commissioner, Larry Scott, was eager to talk about past successes or potential future triumphs, but, to the distaste of people up and down the West Coast, he sometimes had very little to show for the present.

But Scott is no longer in charge. George Kliavkoff, who until recently was a top executive at MGM Resorts International, took over the conference at the start of the month. We had a conversation this week. The interview has been edited for length and clarity.

You’ve been in the job for about a month. What’s your diagnosis for the Pac-12 so far?

I’m very excited about the future of the Pac-12. I see a lot of really, really passionate people working at the league, as well as in each of the athletic departments. I think people are excited about kind of hitting refresh, having nothing specifically to do with me but just the opportunity when all of these issues are all coming up at the same time for college athletics.

This week’s moves by Oklahoma and Texas toward the Southeastern Conference are shaking up the college sports snow globe. How many schools have you heard from about perhaps joining the Pac-12 during this round of conference realignment?

The Pac-12 has long wanted a bigger College Football Playoff, and a 12-team proposal is on the table now.

I wouldn’t say I was thrilled to see that proposal come out. I’m thrilled that we’re talking about expanding the College Football Playoff, because I think a system where only 3 percent of the teams and athletes get to play for a national championship is a broken system. In most of college athletics, 18 to 25 percent of the teams get to play for a championship in their sport, and we obviously would benefit from having more C.F.P. spots.

What I would say about the proposal is that it was constructed over two years and did not include input from anyone from the Pac-12 or the Big Ten or the A.C.C. As a result, some natural considerations that would have been taken into contemplation if we were in the room were not vetted.

There’s a lot about the current proposal that we like. But there’s also some issues that need to be solved before we’d sign off on the proposal. I think the news about Texas and Oklahoma is going to delay that process.

You talked this week about how, going forward, the conference will make all “football-related decisions with the combined goals of optimizing C.F.P. invitations and winning national championships.” What is that going to look like in reality?

The majority of whether you’re successful on the football field or have an undefeated season or a one-loss season sits with the schools. What coach do you hire? What’s your recruiting policy? All of that.

At the margins — although they’re important margins — the conference can be influential and helpful. I think those primarily come down to a few issues like scheduling. Do we make scheduling decisions late in the season that highlight the teams or give preference to teams that have the best shot of making a playoff invitation happen? Do we rethink how we construct our divisions so we don’t have a three-loss team playing against an undefeated team in our championship?

Every decision we make at the conference is up for discussion. There are no sacred cows.

The athletic directors all individually signed off on walking away from parity and focusing on invitations to the playoff and championships, even understanding that their individual schools might be disfavored in that in any particular year or any particular week, but understanding that it’s important for the conference to be back in the playoff and winning championships.

The Pac-12 Network hasn’t met expectations. Can you imagine a time when the league might just say, “This has been a debacle, and we’re going to pack it in?” Or do you see this still as a long-term play for the conference?

I think it’s unfortunate and unfair to call the network a debacle. What’s true about the network is they produce amazing content, and they produce a lot of it. They produce 850 live events; the next nearest network owned by a conference produces just over 500 events, and the next one over that is just over 400, so we’re lapping our competition and producing content.

What’s lacking — and what I think we have to be transparent about — is we don’t have the distribution we need. Deals were done, unfortunately, when that network was first being distributed that include financial clauses that make it almost impossible to extend the distribution of that network before all of those rights coming up for renegotiation in 2024.

Your predecessor was the highest-paid commissioner in college sports and earned more than $4 million a year. How much are you making?

I think we have to disclose that publicly a year from now, and I see no benefit of disclosing that in advance of when it needs to be disclosed. Thank you for asking.

The league office was in Walnut Creek. Then the conference moved to San Francisco and has been spending more on rent than other conferences. Do you plan to move the office?

That’s a very expensive lease in downtown San Francisco. We have two years left on the lease and an option for a third year. I don’t know whether we’ll stay in San Francisco, but what I can tell you is we will be saving money when we do a new lease compared to what we’re spending today. That’s important to me because every dollar that we make in incremental profit is a dollar I get to distribute to the schools and they get to use for student-athletes’ health and well-being and scholarships.

The N.C.A.A. has gotten punched in the nose a lot lately, and some would say it punched itself pretty often.

Its president, Mark Emmert, is talking about decentralizing power in college sports. What’s the association’s future?

I have tried very hard to understand and asked to be educated on the structures of the N.C.A.A., and I still can’t quite make out why it’s structured the way it is. It’s very complicated.

I think it’s likely that, in addition to decentralization and some of the things that the N.C.A.A. controls today being pushed back out to the conferences and teams, I think there will be a structure where there isn’t a monolith over all of those different business models.

Anything else we should be thinking about as you start your tenure?

What should we not be thinking about?

Here’s what else to know today

Power lines in Redondo Beach. Experts have said that power grid regulators across the country have not adequately prepared for the extreme effects of climate change.Credit…Jay L. Clendenin/Los Angeles Times, via Getty Images

California Today goes live at 6:30 a.m. Pacific time weekdays. Tell us what you want to see: [email protected]. Were you forwarded this email? Sign up for California Today here and read every edition online here.

Under Fire and Alone, Cuomo Fights for His Political Life

New York City will require proof of vaccination for indoor dining and fitness.

Mask Mandates Are Returning in Many Cities. N.Y.C. Is Holding Back.

New York Is Pushing Homeless People Off the Streets. Where Will They Go?

N.C.A.A. Looks to Rewrite Its Constitution and Stave Off Critics

After 670 Days, the Blue Jays Finally Returned to Canada

When All Else Fails, It’s Time to See the Olympic Body Mechanic

Italians Stun Even Themselves in 100 Meters and High Jump

At a Wild Trade Deadline, Every Club Made a Move
ZİYARETÇİ YORUMLARI