There Is Shadow Inflation Taking Place All Around Us

Dividing lines harden as the Fed contemplates issuing a digital dollar.
Anasayfa » Teknoloji » They Still Live in the Shadow of Theranos’s Elizabeth Holmes

They Still Live in the Shadow of Theranos’s Elizabeth Holmes

SAN FRANCISCO — When Alice Zhang set out in 2018 to raise funding for her drug discovery start-up, investors kept asking her about Theranos, the …

SAN FRANCISCO — When Alice Zhang set out in 2018 to raise funding for her drug discovery start-up, investors kept asking her about Theranos, the blood testing start-up led by the entrepreneur Elizabeth Holmes that had collapsed in scandal.

Others asked, too. At a Stanford University event, the organizers wanted Ms. Zhang to talk about Theranos. One adviser told her that when her start-up came up in conversation, people responded by cracking jokes about Ms. Holmes.

Ms. Zhang was initially confused. Her start-up, Verge Genomics, uses artificial intelligence to aid the discovery of therapeutic drugs. That was completely different from Theranos’s business of marketing blood testing machines as a diagnostic tool. Ms. Holmes had also been accused of criminal fraud. Ms. Zhang had not.

But the pattern was clear. When Verge Genomics raised funding later that year, a prominent industry columnist penned an article that compared Ms. Zhang to Ms. Holmes. Although the comparisons dissipated as her start-up has grown, Ms. Zhang, 32, said she hears the same stories from other female founders today, even though “I could see no similarity besides the fact that we’re both women in the hard-science space.” 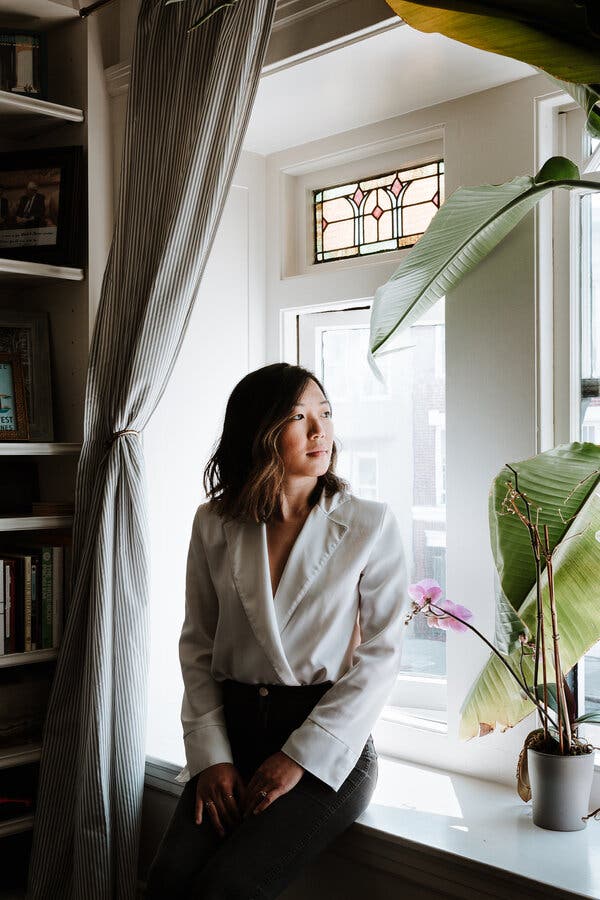 A generation of female entrepreneurs — particularly those in life sciences, biotechnology and health care — is still operating in the shadow of Ms. Holmes. Though Theranos shut down in 2018, Ms. Holmes continues to loom large across the start-up world because of the audacity of her story, which has permeated popular culture and left behind a seemingly indelible image of how female founders can push boundaries.

The tabloid-like saga began when Ms. Holmes started Theranos at the age of 19. She was soon lauded as the next Steve Jobs, crowned the world’s youngest billionaire and lionized on numerous magazine covers. But after a 2015 investigation by The Wall Street Journal raised questions about Ms. Holmes’s claims about Theranos, she spectacularly fell from grace. Her implosion captured the public’s imagination, leading to a documentary, a book, a podcast and an upcoming mini-series starring Amanda Seyfried.

As Ms. Holmes prepares to go to trial in federal court in San Jose, Calif., over allegations that she defrauded investors, doctors and patients — jury selection is scheduled for Aug. 31 — female founders said the ripple effects from the case could be felt anew.

Many said they already had to prove that they belonged in the male-dominated field of start-ups. But in recent years, they faced the additional hurdle of fighting assumptions that they were like Ms. Holmes, they said, something their male counterparts have generally not had to contend with.

“There was already a higher bar before Theranos because we don’t fit the pattern,” said Falon Fatemi, who co-founded Node, an artificial intelligence start-up, and Fireside, a media distribution start-up. “This just makes it that much harder.”

A spokesman for the law firm representing Ms. Holmes, 37, declined to comment. She faces up to 20 years in jail if convicted. Ramesh Balwani, the former chief operating officer of Theranos, has also been charged with fraud, and his trial may start next year. Both have pleaded not guilty.

For Heather Bowerman, 36, the fallout from Theranos has been longstanding. Ms. Bowerman founded DotLab, which has developed a test to help identify endometriosis, a chronic disorder, in 2016. At meetings with some investors, she said, she was often required to explain how DotLab would be different from Theranos. DotLab planned to publish its results in peer-reviewed journals, something Theranos never did, she said.

Still, Ms. Bowerman decided to hold off on raising venture capital funding, relying instead on government grants to get DotLab off the ground.

DotLab has since published results of studies validating its tests in peer-reviewed journals and recruited an advisory board of doctors and scientists, and it is conducting a clinical trial. The company raised $12 million in venture funding in 2019.

Even so, the stigma from Ms. Holmes persists, Ms. Bowerman said. “I still today see hesitation by traditional V.C.s to fund a diagnostics company,” she said. “It really narrows the list to a short list of potential investors.”

Ms. Holmes at a federal court hearing in San Jose, Calif., in May.Credit…Kate Munsch/Reuters
At a Theranos lab in 2015. Ms. Holmes was once lauded as the next Steve Jobs.Credit…Carlos Chavarria for The New York Times

Julia Cheek, founder of Everly Health, which provides at-home health tests through its subsidiary, Everlywell, said at a conference in 2019 that comparisons to Ms. Holmes were so frequent that colleagues and advisers even suggested she dye her hair so that the connections would stop. Both women have blond hair. Ms. Cheek did not change her hair color.

Ms. Cheek, 37, attributed the constant analogies to the fact that few female-founded companies get to a certain size and profile, which magnifies the actions of those that do. “Women founders have to navigate these types of questions that their male counterparts simply don’t have to answer,” she said.

The frequent comparisons are pernicious, many entrepreneurs said. In conversations with investors, female founders often field what researchers call “prevention” questions, which are framed negatively and designed to prevent losses. But male founders are more often asked “promotion” questions about a start-up’s possibilities, which allow them to focus on their hopes and ideals, according to researchers at London Business School and Harvard.

“If you’re offered a promotion question, you can answer in a promotional way,” said Andy Coravos, founder of HumanFirst, an at-home health care start-up. “The core issue you have with Elizabeth Holmes is it’s a prevention question.”

Some women said they also felt caught in a start-up ecosystem that venerates bold, disruptive businesses, with investors often forgiving those who bend the rules or who take shortcuts in pursuit of growth.

Beth Esponnette, founder of Unspun, a custom jeans company, said investors had frequently encouraged her to be more aggressive, sometimes to the point of dishonesty. One once advised her to increase her revenue projections by 10 times, a wildly unrealistic level.

Last month, Ms. Esponnette published an essay describing this struggle titled “I Get It, Elizabeth Holmes.” Many of Ms. Holmes’s actions were inexcusable, Ms. Esponnette, 33, wrote. “But I still believe that she thought she was doing the right thing taking the universal advice of Silicon Valley: ‘Fake it till you make it.’”

Women at tech start-ups wrote to her thanking her for saying what they had been feeling, Ms. Esponnette said.

Lola Priego, 30, the founder of Base, which offers at-home blood and saliva tests that are processed at traditional labs, hears a Theranos comparison at least once a week, she said. The references come directly or indirectly from potential partners, advisers, investors, customers and reporters, she said.

She said she understood the need for skepticism, since new health care companies should be looked at critically to prevent malpractice. Often the comparisons stopped after people learned that Base works with Quest Diagnostics, a multinational company, for analysis of its tests.

“But the additional bias and skepticism is challenging to overcome,” Ms. Priego said.

The biggest blow came from a scientific adviser whom Ms. Priego said she had tried to recruit in 2019. The adviser took the meeting only to tell her that bringing technology into health care was doing a disservice to the industry, just like Theranos. It caused Ms. Priego to question whether she could hire the caliber of advisers she had hoped for.

“It was quite demoralizing,” she said. She has since recruited six advisers.

In July, Verge Genomics struck a three-year partnership with the pharmaceutical giant Eli Lilly to work on drugs for the treatment of amyotrophic lateral sclerosis, or A.L.S., Ms. Zhang said. The company also published a paper about its methods in a scientific journal last year and recruited a chief science officer this year.

It was a relief to have something to show to those who were doubtful, Ms. Zhang said.

“The most fragile part of the company is the earliest stage, when you have to buy into the people, the vision and the idea,” she said. Reflecting on Ms. Holmes and Theranos, she added, “It’s where these types of associations can be really harmful and curtail potential.”

Dealers pay record prices for used cars, reversing a trend that pointed to an easing of inflation.