A New Wellness Brand That Harnesses the Power of the Garden

How Far Can You Go to Resist Being the Subject of a Viral Video?

My Sister Won’t Accept My Same-Sex Partner. What Should I Do?
Anasayfa » Magazin » The T List: Six Things We Recommend This Week

The T List: Six Things We Recommend This Week

Welcome to the T List, a newsletter from the editors of T Magazine. Each week, we share things we’re eating, wearing, listening to or coveting …

Welcome to the T List, a newsletter from the editors of T Magazine. Each week, we share things we’re eating, wearing, listening to or coveting now. Sign up here to find us in your inbox every Wednesday. And you can always reach us at [email protected].

Art Deco Splendor in the City of Light 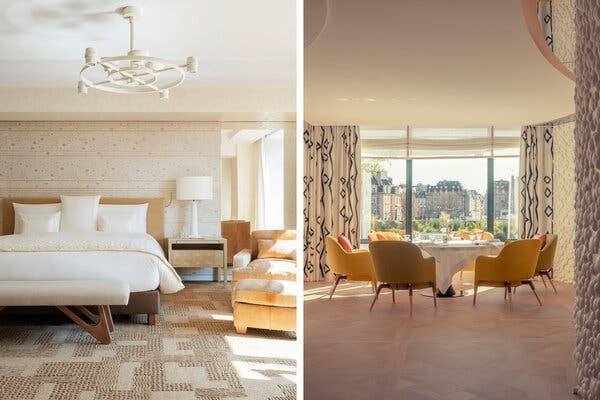 Left: a Deluxe Junior Suite at the Cheval Blanc Paris. Right: a table at its Plénitude restaurant.Credit…Alexandre Tabaste

Located in the heart of the city, the new Cheval Blanc Paris has 72 rooms, with balconies or winter gardens looking out either on the Pont Neuf or the picturesque rooftops of the 1st Arrondissement and beyond. The hotel, set in a 1928 Art Deco building designed by Henri Sauvage and reimagined by the architect and designer Peter Marino, feels like a grand but familiar home, with sculptural chandeliers by Philippe Anthonioz, engraved metallic tables by André Dubreuil and wood sideboards by Charlotte Perriand. Guests are surrounded by art, including works by Claude Lalanne and Vik Muniz, while the property has no fewer than four restaurants: Limbar, a café and bar offering light-as-air pastries by Maxime Frédéric and a cocktail program by Florian Thireau; Le Tout-Paris, a not-so-classic brasserie; the more formal Plénitude, with the Michelin-starred chef Arnaud Donckele at the helm; and the fourth will be the seafood restaurant Langosteria’s first outpost outside of Italy. In between meals, guests might sit in the terrace garden or take a dip in the indoor pool, which features an aqua-colored mosaic by the storied Franz Mayer of Munich atelier and, at 30 meters long, is the largest in town. chevalblanc.com.

For this month’s installment of the T List’s beauty column, which details the products and treatments that creative people swear by, Jessica Richards speaks about her daily routine.

For my morning shower I use Necessaire’s Body Exfoliator with the Supracor Stimulite Bath Mitt — it’s a loofah and dry brush in one — Christophe Robin’s Brightening + Clarifying Shampoo (which they are discontinuing, so I’m not sure what I’ll do!) and Virtue’s Recovery Conditioner. I have incredibly dry skin, so when I dry off I leave it a bit damp and rub in a bit of Olverum’s Body Oil and then Augustinus Bader’s Body Cream. I brush my hair with a Manta hairbrush — Shen, my beauty store, debuted it recently; it’s the best thing on the planet: The more you use it, the less your hair falls out — and comb ina tiny bit of Virtue’s Un-Frizz Cream before putting it in a bun. I don’t wash my face in the morning, I just rinse with water.Then I apply Irene Forte’s Helichrysum Hyaluronic Toner and the Skin Memory Serum from Ideo, which we just launched. Going into fall, I’ll start using Bynacht’s Nocturnal Signature Anti-Age Cream (yes, even during the day). For makeup, I use Eye Love You Mascara from Westman Atelier and a lipstick from Maarks Lip in Rouge unless I’m wearing a mask, then I’ll wear Cherry Chapstick. I always go back to Bobbi Brown’s Long-Wear Gel Eyeliner in black; it goes on easily and doesn’t smudge. I like eyeliner underneath my lashes so that it adds a bit of definition. We have a service at Shen called Multeye: tattooing underneath your lash line, a brow wax, tint and a few microblading strokes. I do it every nine months. For fragrance, I’m obsessed with Dirty Grass from Heretic and Witchy Woo from Yasmine Sewell’s new brand Vyrao, which will be available at Shen this month. At night, my number-one priority is to get all the dirt and grime off with a foaming cleanser like Youth to the People’s Superfood Cleanser or Reflekt’s Daily Exfoliating Face Wash, and then I apply an oil or balm cleanser. Irene Forte’s Almond Cleansing Milk is super-calming, but I also love Joaquina Botanica’s Hydrating Essence. For serums, I go super-heavy. I use Ideo at night too — if you use it twice a day, you really see the results. After that, I layer on something like the Supernal Cosmic Glow Oil or Pai Carbon Star if I feel like I might be getting a bit of a breakout. I like Dr. Barbara Sturm’s Eye Cream — I have very sensitive eyes, and it doesn’t have any added fragrance. Finally, I use MBR’s Cream Extraordinary; I need as much hydration as I can get. I layer and coat and go to bed looking like a glazed doughnut.

This interview has been edited and condensed.

When Domenico Dolce and Stefano Gabbana began self-isolating in Milan at the start of the Covid-19 outbreak last spring, the fashion designers found themselves turning their attention to their immediate surroundings. “We kept coming back to the idea of the home as the most important space,” say the couple, who spent the time dreaming up Dolce & Gabbana Casa, the brand’s first décor range. It was partly inspired by the work of some of their favorite talents, including Paul Evans and Gio Ponti (“I collect furniture I love; it’s my only vice,” says Dolce). The end result, though, which was unveiled this past weekend ahead of the brand’s Alta Moda show in Venice, is entirely their own — and is deeply rooted in Italian craftsmanship. Four of the brand’s iconic motifs appear throughout the line, as with a leopard-print armchair and matching side table, a comfy-looking couch reminiscent of blue-and-white Maiolica and various desk accessories that feature a print depicting a traditional Sicilian horse-drawn cart. dolcegabbana.com.

Two or so years ago, when the 39-year-old designers and architects Eleni Petaloti and Leonidas Trampoukis of the cerebral design studio Objects of Common Interest learned of the 20th-century Japanese American artist Isamu Noguchi’s connection to their native Greece — he once described it as his “intellectual home” — they were immediately inspired. The couple, who split their time between New York City and Athens, began researching the digital archives of the Noguchi Museum in Long Island City, Queens, to create an online feature and a forthcoming set of books on Noguchi’s Greek influences. Now this aesthetic fascination has been brought to life with “Hard, Soft and All Lit Up With Nowhere to Go,” a new exhibit organized by the Noguchi Museum’s senior curator Dakin Hart, opening on September 15. By blending OoCI’s playful objects (tubular lights and chairs, arcing cobalt formations, massive transparent inflatable sculptures that wobble in the wind) with Noguchi’s own pieces, the show creates deep connections — between eras, places and creatives; between the increasingly blurry fields of art, design and architecture — that speak above all to the power of constant cultural exchange. “Between Noguchi and ourselves, we’re both examining concepts like light, weight and volume,” Petaloti says, “but we’re answering in different ways.” noguchi.org.

Forest restaurant at the Paris Museum of Modern Art.Credit…Alexandre Tabaste

The 27-year-old architect Julien Sebban, founder of the French design collective Uchronia, had a postapocalyptic vision when he visited the site of the Paris Museum of Modern Art’s future restaurant, Forest, a couple of years ago. A remnant of the 1937 Universal Exhibition, the high-ceilinged concrete space looked to him like a subterranean Brutalist lair. Sebban and his team decided to embrace the atmosphere, creating a bunkerlike agora with surfaces of polished concrete that become rougher the farther one ventures within. The overall effect, however, is one of warmth and comfort, with walls covered in a thicket of vines and mossy boughs and the soft glow of moonlike volcanic-stone sconces. Though Forest might look like the end of the world, Sebban says, it’s actually a “really nice place to be.” forest-paris.com.

The Scent of Palace Intrigue

The inspirations behind Luca Nichetto’s designs for Ginori 1735’s first home fragrance collection, La Compagnia di Caterina, are as multilayered as the scents. Though the theme is the court of Catherine de’ Medici, the infamous queen credited with introducing perfume to the French when she brought her perfumer with her to Paris from Florence, Nichetto was also influenced by lucha libre masks, Baz Luhrmann’s “Romeo + Juliet” and ­­Jean-Paul Goude’s portraits of Grace Jones. “A lot of my loves are in this project,” he says. The result is a boldly designed collection of scented candles, incense burners and room diffusers with fragrances by Jean Niel, the oldest perfume house in France. Each item is cast in the form of one of eight archetypal courtiers, including the Lover and the Scholar, and nearly all can be refilled with the same or different scent, creating what the company calls an “afterlife.” From $90, ginori1735.com.

Where the Props Live

The Man Who Finally Made a ‘Dune’ That Fans Will Love

How to Collect Crystals

A Celestial Cuff Modeled After One Made for Marlene Dietrich

A Ceramist Who Draws on His Craft’s Ancient Global Traditions