An Oath Keeper Was at the Capitol Riot. On Tuesday, He’s on the Ballot.

Why Not Just Tell Everyone to Wear Masks?

[Want to get New York Today by email? Here’s the sign-up.] It’s Friday. Weather: A lovely start to the weekend — sunny, with a high in the mid …

Weather: A lovely start to the weekend — sunny, with a high in the mid-70s. Sunny again on Saturday, high in the upper 90s. A few clouds on Sunday, and warming to the mid-80s. 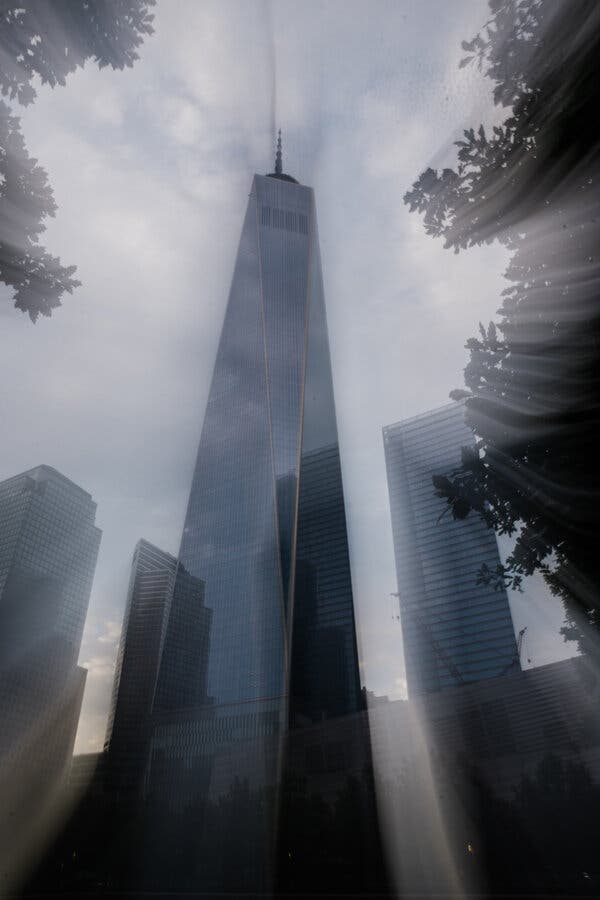 Saturday marks the 20th anniversary of the Sept. 11 attacks, a day of horror that left 2,753 dead in New York and thousands more injured.

It is hard to overstate how much things changed after the attacks, from the commercial makeup of Lower Manhattan and airline travel to personal relationships and private lives. Even now, the remains of those who died are still being identified.

As my colleague Dan Barry asks, what does it mean to “never forget”? Someday, he writes, there will be no one alive with a personal narrative of Sept. 11, and time will transform a visceral memory into a history lesson.

But for now, for many, the day remains a lived experience. Here are just some of the ways Sept. 11 changed the city and its people forever.

[Read more of our coverage marking the 20th anniversary of the 9/11 attacks.]

Surveillance technology that came into use after Sept. 11 has fundamentally changed the way the New York Police Department operates, altering its approach to finding and foiling terrorist threats, but also to cracking minor cases.

Both supporters and critics of the shift say the attacks profoundly changed American policing — perhaps most acutely in New York.

Shahana Hanif, a Brooklyn resident, and her Muslim peers who came of age after Sept. 11 witnessed the ways their communities were deeply affected by police measures targeting Muslim residents.

“What we realized and had to grapple with from a very young age was fighting for a more democratic city, fighting for equity without even knowing these terms,” Ms. Hanif said.

For Ms. Hanif, now 30, the fallout from Sept. 11 became a driving force in her pursuit of politics. And other Muslims from her generation are entering New York’s electoral ranks, too.

Survivors of 9/11 are still falling ill

By some estimates, more than 400,000 people in Lower Manhattan were exposed to toxic material from the pulverized towers, leading to health issues — some fatal — that were diagnosed many years later.

John Mormando, 54, was working as a commodities broker a few blocks from ground zero in 2001. He later underwent a double mastectomy after being diagnosed with breast cancer, an ailment suffered by a cluster of men who spent time near the site.

“We were told that the air was fine, and we needed to get back to work,” he said. “There were buildings still on fire.”

Just so you know: New York Today will get a new format on Monday. You’ll meet the new writer and see the new look then. But Metropolitan Diary and the games you look for aren’t going anywhere.

How a TV Ad Enticed Broadway Crowds Right After 9/11

More than a third of New York City’s municipal workers have yet to receive their first dose of the Covid-19 vaccine. [Gothamist]

As emergency crews in New Jersey searched for people missing after Ida’s floods, a body was found in the Passaic River near Newark. [NBC 4 New York]

Mayor Bill de Blasio announced that preschool, day care workers and after-school staff will be required to get vaccinated by Sept. 27. [Chalkbeat]

Venues and organizations in New York City are marking the 20 years that have passed since the Sept. 11 attacks. Here are suggestions, both virtual and in person, for events to attend on Saturday:

In-person: ‘A Village Gathering: To Honor and Remember’

At 5 p.m., people will gather to share stories and listen to readings and music at AIDS Memorial Park in Manhattan.

Attend a live performance by the jazz ensemble Onyx Collective at 7 p.m. in Manhattan.

Purchase tickets ($21) on the event page.

In person and virtual: ‘Concert for Peace’

At 7 p.m. in Manhattan, join Musicians for Harmony for a concert featuring performances by the Juilliard String Quartet, Musique Sans Frontières and others.

Read about more events happening in the city.

I was walking in Morningside Park when I saw a mama duck and her ducklings heading out of the park. I tried to get her to go back but she wouldn’t.

A woman called out and said the ducks were headed for Central Park.

Really? I asked. How is she going to get there?

And we did. Seven of us, all strangers, guided the duck and her ducklings through the street, stopping traffic, picking babies up onto the curb and following closely to make sure they all got there safely.

When we got to Central Park, all the babies intact, they emerged from the bushes and hopped in the water. We all cheered. It was so energizing. We parted ways, and I walked home with a huge smile on my face.

The highlight was a truck driver who cursed at us when we stopped traffic, only to let out a gasp when he saw the ducks.

In Two Weeks, a New Governor of New York