Homes for Sale in New York and Connecticut

For a Tony Nominee, an Apartment With a Sense of Drama

‘Million Dollar Listing’ Agent Has His Own New Listing

In the Bronx, Mott Haven Suddenly Gets a Skyline

Long before the actor Anthony Rapp found success on Broadway in “Rent,” he was living much the same way as the struggling East Village artists …

Long before the actor Anthony Rapp found success on Broadway in “Rent,” he was living much the same way as the struggling East Village artists the hit musical portrayed. The thought of owning a place in Manhattan at the time seemed unrealistic.

But in the summer of 1998 — two and a half years after he was cast as the original lead in “Rent” — he had scraped together enough money for a down payment on a second-floor studio loft at 1 Bond Street in NoHo, a historic cast-iron condominium building near Lafayette Street. The sale price was $375,000.

“It was a little out of my price range, but I crunched the numbers and was able to make it work,” said Mr. Rapp, who was raised in Joliet, Ill., and had been renting since the early ’90s in an East Village walk-up with legions of roommates, including his brother, Adam Rapp, a playwright and novelist.

The actor Anthony Rapp had been living in NoHo for around 23 years. He recently relocated back to the East Village.Credit…Nina Prommer/EPA, via Shutterstock

Soon after the NoHo purchase, Mr. Rapp began what turned into a two-phase renovation lasting several years and costing, by his estimate, at least as much as he had paid for the unit. This included redoing the kitchen and bathroom and installing wraparound bookshelves of reclaimed wood and scrap metal, among other custom flourishes. “I am incredibly proud of the work I put into it,” he said.

But Mr. Rapp outgrew his environs. He wanted to start a family someday with his fiancé, Ken Ithiphol, a personal and leadership coach, and that called for more space. He recently found it back in his old neighborhood. In mid-October, he and Mr. Ithiphol, along with their three cats and dog, moved into a three-bedroom, three-bath apartment they bought in a new luxury development in the East Village.

“It’s kind of a return to my earliest roots as an adult,” Mr. Rapp said. And their new place isn’t too far from the New York Theater Workshop, either, where “Rent” first debuted in February 1996 before landing on Broadway a couple of months later. Mr. Rapp would go on to reprise his role as Mark Cohen, an aspiring filmmaker and the narrator, in the film version. 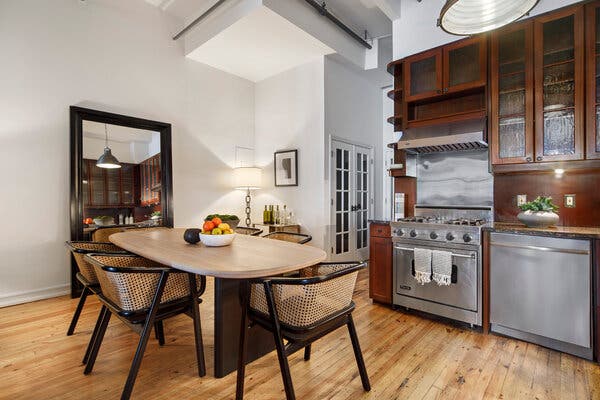 The loft has areas for dining and lounging.Credit…MW Studio for Sotheby’s International Realty

The NoHo apartment is being listed for $1.95 million, according to Kristi Ambrosetti of Sotheby’s International Realty, which is marketing the property. The monthly carrying costs total $1,607.

The home encompasses 1,250 square feet and has an L-shaped configuration. A central foyer leads to a large open area at the southeast side, with spaces for lounging and dining, along with a kitchen, bathroom, laundry area and large walk-in closet.

At the other end of the apartment is a sleeping area and office space lined with handcrafted, floor-to-ceiling shelving designed by Steven Royal, a noted set designer and director. There is also an art wall of scrap wood tiles crafted by the contemporary artist Michelle Peterson-Albandoz.

One of Mr. Rapp’s favorite spots was the window seat in the office area, where, he said, he often enjoyed a cup of tea and a good book — that is, when he wasn’t on tour or on location filming. In addition to “Rent,” he has starred in the Broadway musical “You’re a Good Man, Charlie Brown.” He currently appears on the TV series “Star Trek: Discovery.”

Throughout Mr. Rapp’s apartment are many original architectural details, including wood floors of knotted pine, twice refinished; 12.5-foot ceilings; exposed pipes and columns; and a tin ceiling that was discovered by surprise during renovations and partially salvaged. Oversized, factory-style windows look out onto the quaint cobblestone Bond Street.

“It’s very rare to have an original loft with so many of the details intact,” said Ms. Ambrosetti, the Sotheby’s agent, “and to be able to have a condo when there’s so much co-op product in the area.”

The residence is one of 19 units in the building, a.k.a. the Robbins & Appleton Building. It was erected in 1877 and used by the American Waltham Watch Company to manufacture watch cases. The structure was added to the National Register of Historic Places in 1982 and converted into condominiums in 1988.

Can You Renovate a Rental? Sure, if You’re Careful.

A New Meaning to ‘Working in the Garden’

Your Garden May Be Pretty, but Is It Ecologically Sound?

A Surprise for Two ‘Creatives’: An Artists’ Loft in the East Village