With a Door Left Open, Atlanta Hopes to Walk Right In

Open Tryouts During the Season? For Arizona, Loser of 17 Straight, Why Not?

Pacquiao Is Fighting, but Not in a Novelty Bout

The Moving Moments as the Paralympics Ended

How Do You Win a Do-or-Die Game in Fenway? These Guys Know.

The Yankees’ Roller Coaster of a Season Hits Another Big Dip
Anasayfa » Spor » ‘Late Night’ LaMonte, Pinch-Hit Homers and a Closer From Nowhere

‘Late Night’ LaMonte, Pinch-Hit Homers and a Closer From Nowhere

SAN FRANCISCO — Along with a franchise-record 107 victories, and a cascading list of things that contributed to them, the San Francisco Giants …

SAN FRANCISCO — Along with a franchise-record 107 victories, and a cascading list of things that contributed to them, the San Francisco Giants have been able to fill one gaping modern-era void. In a time starved for great nicknames like Dizzy (Dean), Three-Finger (Brown) or Catfish (Hunter), the Giants have introduced “Late Night” LaMonte Wade Jr.

He is neither a talk-show host nor a local television personality, but a versatile outfielder-first baseman acquired in a small, mostly unnoticed trade with Minnesota last February for pitcher Shaun Anderson. A career .211 hitter in only 95 major league at-bats coming into this season, Wade, 27, was nicknamed“Late Night” because of his propensity for ninth-inning heroics. In 336 at-bats this summer, Wade had six game-tying or go-ahead hits in the ninth inning or later. That is the most of any player in the past 40 seasons, according to Stats.

It is difficult to tell who is having more fun with the nickname, Wade’s teammates or San Francisco’s fans. Certainly, his teammates are very vocal about it, both in the dugout during tense moments and in the clubhouse during moments of celebration.

“Anytime the ninth inning comes around they say, ‘We’ve got to have Wade come around,’” Wade said as the Giants worked out here at Oracle Park on Thursday afternoon in preparation for Game 1 of their division series against the Los Angeles Dodgers on Friday night. 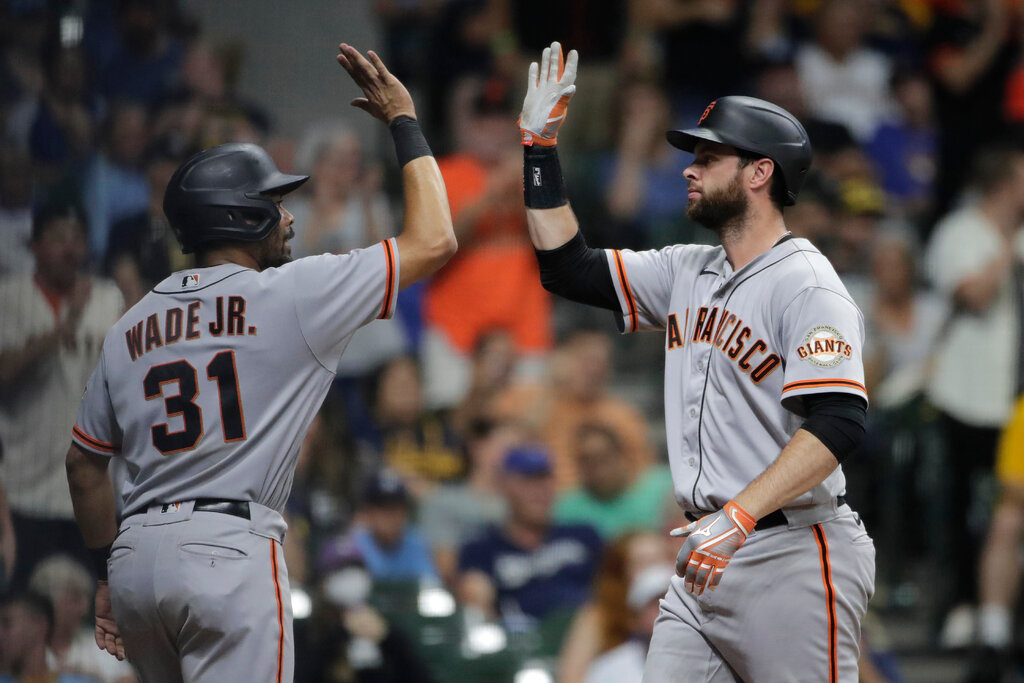 ‘I just want to point out, I’m pretty sure I gave him that nickname so I want credit for that.’

“I just want to point out, I’m pretty sure I gave him that nickname so I want credit for that,” said injured first baseman Brandon Belt, who has become something of a mentor to Wade and other young Giants during the team’s run of remarkable and unexpected success this season, earning him his own nickname: “Captain Belt.”

Belt explained that he was on the Giants postgame television show following one of Wade’s triumphant moments when he was given a multiple choice of nicknames for San Francisco’s newest hero.

“They said ‘Late Game LaMonte,’ something else or ‘Late Night LaMonte,’ and I said that I liked Late Night,” Belt said, before adding, “It’s been a blast watching him.”

Wade is the latest example of the success that Farhan Zaidi, the Giants’ president of baseball operations, has had mining the discard pile for overlooked players. One thing that caught the attention of Zaidi and his analytics staff was the plate discipline Wade exhibited even while scratching to reach the majors. Over 480 career minor league games coming into 2021, he had walked more times (303) than he had struck out (281).

“Our hitting group spent a lot of time with him in the off-season and felt like there were adjustments he could make,” Zaidi said. “And I have to say when you go back, he had three home runs in his major league career coming into the season but when you look at them, they weren’t cheapies. He hit a massive home run against Shane Bieber, who was one of the best pitchers in baseball.”

He continued: “You watch those swings and those home runs and you say, this guy has power, it’s just a matter of getting to it consistently.”

Wade, however, is not the only secret ingredient to San Francisco’s success.

Tucked into the Giants’ franchise record of 241 home runs this season was another quirky accomplishment: Their 18 pinch-hit home runs are also a major league record, and there’s not a Gates Brown (a former Tigers pinch-hitter with another excellent nickname culled when Detroit signed him out of prison), Manny Mota (the longtime pinch-hitting specialist for the Dodgers) or Lenny Harris (M.L.B.’s career pinch-hits leader with 212) in the bunch.

Rather than one specialist being responsible for them, the pinch-hit homers have been spread out: Austin Slater led with four (and had only 12 homers total for the season); Alex Dickerson had three; Donovan Solano, Wilmer Flores and Belt each had two; and five other hitters had one apiece.

“Shoot, it’s been really really cool,” Belt said. “It’s something we’re super proud of, especially the pinch-hit record. Pinch-hitting is not easy. It takes a special kind of person. You have to really help the team in order to do it. If you’re more worried about yourself, it’s going to be a little tougher in my opinion.”

Part of the reason the Giants have so many pinch-hit homers is because there are so many opportunities. Manager Gabe Kapler firmly believes in the importance of hitter-pitcher matchups, so many positions are filled by a platoon of lefty and righty hitters.

“Beyond players and coaches, you have to give Kap a lot of credit for pulling the trigger in a lot of those situations,” Zaidi said. “He kind of uses his judgment, goes with what he sees in the flow of a game but isn’t afraid to play a good matchup even if a guy has two or three hits in a game or has a homer.”

Indeed, of those 18 pinch-hit homers, the pinch-hitter was replacing someone who had already homered in the game twice: Dickerson on April 1 in Seattle (batting for Slater) and Wade on Aug. 22 at Oakland (batting for Darin Ruf).

“Nobody ever likes being pinch-hit for, but when a guy comes out and he’s high-fiving the guy coming in for him and he’s the most excited player on the top step when those guys come through, that’s an awesome thing to see,” Zaidi said.

Camilo Doval’s emergence as a reliable closer for San Francisco has reminded many people of Francisco Rodríguez’s breakout with the Angels in 2002.Credit…Jeff Chiu/Associated Press

The Giants needed every one of their 107 wins to seize the N.L. West this year because the Dodgers won 106. Los Angeles won 70 percent of its post-All-Star break games and still finished second.

One key reason is that the Giants bullpen went 16-2 in September with an M.L.B.-leading 2.38 E.R.A. Rookie Camilo Doval was recalled from Triple-A Sacramento on Sept. 5. It was his fourth recall of the season, and this time everything came together for the right-handed Doval, 24, whose 100-mile-per-hour fastball and wipeout slider elicited memories of Francisco Rodríguez when he broke into the majors and helped the Anaheim Angels beat the Giants in the 2002 World Series.

Doval has settled into the closer’s role and has worked 15 and a third consecutive scoreless innings dating back to Aug. 12. That’s the fifth-longest active streak in the majors.

Kapler points to Doval’s early struggles and the fact that he had to be sent down to the minors as examples of how a team can learn valuable lessons through experience.

“So you can take that anecdote with Camilo Doval and expand that out across our entire roster, and many players that have been in Triple-A this year and they could share similar experiences,” Kapler said. “They’re not all perfectly analogous, but you get my point. They’re all better for having been in those moments.”

Pitcher Taken to Hospital After Being Struck by Line Drive