Janet Yellen Gets a Chance to Shape the Fed, This Time From Outside

Is Robinhood’s Disruption a Good Thing?

The U.S. economy slowed in the third quarter, growing 0.5 percent.

Inflation Is Popping From Sydney to San Francisco. It May Be a Good Sign.

Fed Ethics Office Warned Officials to Curb Unnecessary Trading During Rescue
Anasayfa » Teknoloji » If You Never Met Your Co-Workers in Person, Did You Even Work There?

Kathryn Gregorio joined a nonprofit foundation in Arlington, Va., in April last year, shortly after the pandemic forced many people to work from …

Kathryn Gregorio joined a nonprofit foundation in Arlington, Va., in April last year, shortly after the pandemic forced many people to work from home. One year and a zillion Zoom calls later, she had still never met any of her colleagues, aside from her boss — which made it easier to quit when a new job came along.

Chloe Newsom, a marketing executive in Long Beach, Calif., cycled through three new jobs in the pandemic and struggled to make personal connections with co-workers, none of whom she met. Last month, she joined a start-up with former colleagues with whom she already had in-person relationships.

And Eric Sun, who began working for a consulting firm last August while living in Columbus, Ohio, did not meet any of his co-workers in real life before leaving less than a year later for a larger firm. “I never shook their hands,” he said.

The coronavirus pandemic, now more than 17 months in, has created a new quirk in the work force: a growing number of people who have started jobs and left them without having once met their colleagues in person. For many of these largely white-collar office workers, personal interactions were limited to video calls for the entirety of their employment.

Never having to be in the same conference room or cubicle as a co-worker may sound like a dream to some people. But the phenomenon of job hoppers who have not physically met their colleagues illustrates how emotional and personal attachments to jobs may be fraying. That has contributed to an easy-come, easy-go attitude toward workplaces and created uncertainty among employers over how to retain people they barely know.

Already, more workers have left their jobs during some pandemic months than in any other time since tracking began in December 2000, according to the U.S. Bureau of Labor Statistics. In April, a record 3.9 million people, or 2.8 percent of the work force, told their employers they were throwing in the towel. In June, 3.8 million people quit. Many of those were blue-collar workers who were mostly working in person, but economists said office workers who were stuck at home were also most likely feeling freer to bid adieu to jobs they disliked.

“If you’re in a workplace or a job where there is not the emphasis on attachment, it’s easier to change jobs, emotionally,” said Bob Sutton, an organizational psychologist and a professor at Stanford University.

While this remote work phenomenon is not exactly new, what’s different now is the scale of the trend. Shifts in the labor market usually develop slowly, but white-collar work has evolved extremely quickly in the pandemic to the point where working with colleagues one has never met has become almost routine, said Heidi Shierholz, a senior economist at the Economic Policy Institute, a nonprofit think tank.

“What it says the most about is just how long this has dragged on,” she said. “All of a sudden, huge swaths of white-collar workers have completely changed how they do their work.”

The trend of people who go the duration of their jobs without physically interacting with colleagues is so new that there is not even a label for it, workplace experts said.

Many of those workers who never got the chance to meet colleagues face to face before moving on said they had felt detached and questioned the purpose of their jobs.

Ms. Gregorio, 53, who worked for the nonprofit in Virginia, said she had often struggled to gauge the tone of emails from people she had never met and constantly debated whether issues were big enough to merit Zoom calls. She said she would not miss most of her colleagues because she knew nothing about them.

“I know their names and that’s about it,” she said.

Other job hoppers echoed the feeling of isolation but said the disconnect had helped them reset their relationship with work and untangle their identities, social lives and self-worth from their jobs.

Joanna Wu, who started working for the accounting firm PwC last September, said her only interactions with colleagues were through video calls, which felt like they had a “strict agenda” that precluded socializing.

“You know people’s motivation is low when their cameras are all off,” said Ms. Wu, 23. “There was clear disinterest from everyone to see each other’s faces.” 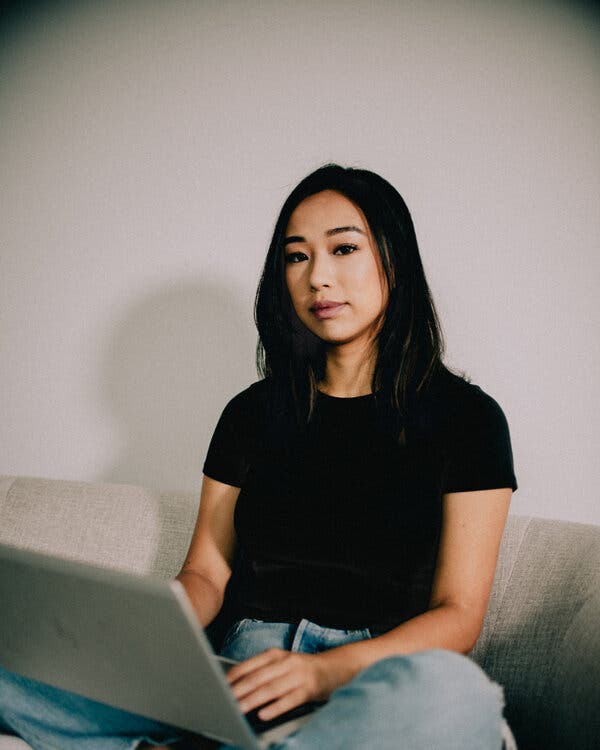 Joanna Wu said her only interactions with colleagues were through video calls, which felt like they had a “strict agenda” that precluded socializing.Credit…Akilah Townsend for The New York Times

Instead, she said, she found solace in new hobbies, like cooking various Chinese cuisines and inviting friends over for dinner parties. She called it “a double life.” In August, she quit. “I feel so free,” she said.

Martin Anquetil, 22, who started working at Google in August last year, also never met his colleagues face to face. Google did not put much effort into making him feel connected socially, he said, and there was no swag or other office perks — like free food — that the internet company is famous for.

Mr. Anquetil said his attention had begun to wander. His lunchtime video game sessions seeped into work time, and he started buying basketball highlights on N.B.A. Top Shot, a cryptocurrency marketplace, while on the clock. In March, he quit Google to work at Dapper Labs, the start-up that teamed up with the National Basketball Association to create Top Shot.

If one wants to work at Google and “put in 20 hours a week and pretend you’re putting in 40 while doing other stuff, that’s fine, but I wanted more connection,” he said.

To help prevent more people from leaving their jobs because they have not formed in-person bonds, some employers are reconfiguring their corporate cultures and spinning up new positions like “head of remote” to keep employees working well together and feeling motivated. In November, Facebook hired a director of remote work, who is responsible for helping the company adjust to a mostly remote work force.

Other companies that quickly shifted to remote work have not been adept at fostering community over video calls, said Jen Rhymer, a postdoctoral scholar at Stanford who studies workplaces.

“They can’t just say, ‘Oh, be social, go to virtual happy hours,’” Dr. Rhymer said. “That by itself is not going to create a culture of building friendships.”

Employers who never meet their workers in person are also contributing to job hopping by being more willing to let workers go. Sean Pressler, who last year joined Potsandpans.com, an e-commerce website in San Francisco, to make marketing videos, said he was laid off in November without warning.

Mr. Pressler, 35, said not physically meeting and getting to know his bosses and peers made him expendable. If he had built in-person relationships, he said, he would have been able to get feedback on his pan videos and riff on ideas with colleagues, and may have even sensed that cutbacks were coming well before he was let go.

Instead, he said, “I felt like a name on a spreadsheet. Just someone you could hit delete on.”

And his co-workers? “I don’t even know if they know who I was,” he said.

Social Security is projected to be insolvent a year earlier than previously forecast.

The S&P 500 drops for a fifth day, its worst stretch since February.

Biden’s Plans Raise Questions About What U.S. Can or Cannot Afford to Do
ZİYARETÇİ YORUMLARI