Her Latest Trick: Finding an Affordable One-Bedroom in Manhattan

Do I Need to Clean Up My Attic Before I List My House?

The Best and Worst Cities to Live Without a Car

When Gloria Vanderbilt was 91, she and her son Anderson Cooper wrote a book together called “The Rainbow Comes and Goes.” It was an epistolary …

When Gloria Vanderbilt was 91, she and her son Anderson Cooper wrote a book together called “The Rainbow Comes and Goes.” It was an epistolary memoir, conducted by email, in which Mr. Cooper asked his mother all the questions he hoped never to be left with after her death: her true feelings about her storied, often tragic life, with its unimaginable losses — her own father’s death when she was a baby; his brother Carter’s suicide at 23; his father Wyatt Cooper’s death at 50 (when Anderson was 10 and Carter 12) — and unlikely high points (as when Ms. Vanderbilt made a fortune in the 1970s by putting her name on a pair of jeans, and in so doing changed the fashion business forever, only to lose it to a scheming lawyer in cahoots with her own psychiatrist).

Ms. Vanderbilt died in 2019. She was 95. But as it happens, she did live on in her apartment, a layered, sumptuous jewel box of a place that looks like something out of “The Arabian Nights,” draped with swoops of orange silk, lacquered pink walls, mirrored halls, Russian icons and chandeliers from which Christmas ornaments hang year round. Decorating is autobiography, she often said, and 30 Beekman Place, her home for nearly a quarter century, tells a vibrant story.

Her apartment is being listed by Ileen Schoenfeld and Aracely Moran of Brown Harris Stevens for $1.125 million; the monthly maintenance is $4,311. It has two bedrooms, a dining room, a kitchen with a breakfast room and two and a half bathrooms. Her ground floor studio — technically a two-bedroom apartment — may also be for sale, with a price yet to be determined. (It’s a relatively low price for a Classic Five but the apartment is on a low floor, has a high maintenance and is in a neighborhood that is slightly off the beaten track. Also, unrenovated since 1997, when Ms. Vanderbilt move in, it needs a total rehab.) 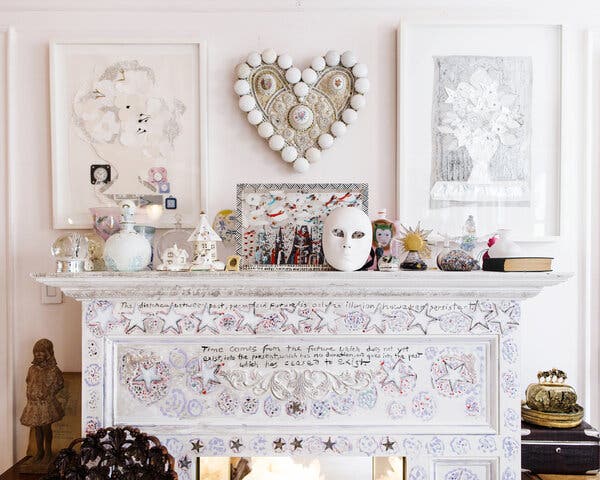 Collages by Ms. Vanderbilt, and on the fireplace, which she hand-painted, a quote paraphrased from Einstein: “The distance between past, present and future is only an illusion, however persistent.” (Many of her personal items have since been removed for the listing of the property.)  Credit…Ike Edeani for The New York Times

“It’s one of the great wonderlands,” Wendy Goodman, design editor of New York magazine, told this reporter when she visited Ms. Vanderbilt there in 2016. Ms. Goodman’s 2010 book, “The World of Gloria Vanderbilt,” contains photographs of it and its grand predecessors. “It’s a constant laboratory for her. She’s always repainting and redecorating. It’s like a tonic for her.”

In the glittering, bricolaged living room, there is the full-scale portrait of her beautiful, hapless mother, Gloria Morgan Vanderbilt, widowed at 21, when Little Gloria, as she was known in the press, was just 15 months old, and who lost custody of her daughter (and the allowance and jet-set lifestyle her daughter’s inheritance afforded her), nearly nine years later. It was 1934, the height of the Great Depression, and Little Gloria was 10; the much-publicized custody trial, after which her aunt, Gertrude Vanderbilt Whitney, became her legal guardian, was her first brush with the sting of fame.

On the far side of the marble fireplace is her own life-size portrait by Aaron Shikler, the American portrait painter who was also a lover. Married four times (the first, at 17, to an actor’s agent with mob connections who beat her and was rumored to have killed his first wife), Ms. Vanderbilt’s romances included Frank Sinatra, Howard Hughes and the photographer Gordon Parks.

Ms. Vanderbilt, enduringly optimistic, believed in maintaining an attitude of romantic readiness, as she often said.

“She always felt the next great love affair or the next great adventure was right around the corner,” said Mr. Cooper, whose worldview is somewhat gloomier.

“The distance between past, present and future is only an illusion, however persistent,” Ms. Vanderbilt painted on her bedroom mantel, along with stars and other shapes, paraphrasing Albert Einstein.

On a wall is Mr. Cooper’s spooky baby picture, taken by Diane Arbus. On another, Al Hirschfeld’s portrait of Ms. Vanderbilt, crosshatched with Ninas. Her own art work is everywhere, the naïf paintings, shadow boxes and sparkly collages she had been making all her life, even in her last years, when she began selling pieces, to the delight of Mr. Cooper, from the Instagram account he set up for her. “She would secretly reach out to people without telling me,” he said. “It gave her such a boost. She couldn’t believe that people would follow her and that her work would be seen.”

Her much-photographed former dwellings were just as richly layered. In a townhouse on East 67th Street, antique quilts covered the walls, ceiling and even the floor of her bedroom; a Stanford White house in Southampton had touches of pink and blue gingham; a palatial apartment on Gracie Square overlooking the East River looked like an English manor, with its grand living room swathed in chintz and the walls lacquered yellow; even a modernist apartment at U.N. Plaza, the glassy tower, was patchworked with fabric of her own design. Ms. Vanderbilt, enthusiastic and questing, was not the sort of person to leave a surface untouched.

“When I was growing up,” Mr. Cooper said, “we moved every four years. My mom was always remodeling and redecorating, never quite satisfied with the story the room was telling at the time. Moving would be part of that. She would get restless with a place. For her to stay in this apartment for 23 years, which for my mom is an eternity, it had to change. I think she got tired of all the moving, and she decided to burrow into this place and just work on it.”

It also connected her to her late husband, Wyatt Cooper — her happiest marriage, she said. The ground floor apartment below was once his office. A former actor, Mr. Cooper was an author, editor and screenwriter (he co-wrote “The Chapman Report” with Don M. Mankiewicz). Ms. Vanderbilt used it as her studio.

“She kept finding her own style in deeper ways as she got older,” said Ben Brantley, former chief theater critic of The New York Times and a close friend. “Beekman Place was like a cocoon. But it wasn’t dark or forbidding. It had a sort of aqueous quality about it. All those colors, and the curiosity shop of objects. At night it was like a tent in the desert. An opulent Bedouin tent. For all of the emblems of family life and heritage and dynasty that she surrounded herself with, she knew how ephemeral life was, and how provisional.”

In the apartment, things would come and go. Mr. Cooper worried often about the fate and weight of all her stuff.

“She had a storage unit which she had never been to and I used to worry about it,” he said, “about the waste of money. I imagined a furnace burning money, like in the closing scene of ‘Citizen Kane.’ Just boxes and boxes.”

For the last 10 years, he added, he has been sifting through them. After her death he found more squirreled away.

A mantel painted by Ms. Vanderbilt, with a curiosity shop of objects above. Credit…Ike Edeani for The New York Times

“When my mom was alive,” he said, “she would remember a table she had in the house on 67th Street and she would say to Nora, her housekeeper who had been with her for 60 years, ‘I would like to get that table that was in the patchwork bedroom,’ and so Nora would go to the storage unit and find this long lost object and then she would embrace it. It would solve the problem she had suddenly detected in the room. But then after about a week or a month I would get a call saying, ‘Do you have room for this table? I thought it worked but it doesn’t.’ ”

Or Mr. Cooper might get a call and Ms. Vanderbilt would say, “The most amazing thing has happened. I found these screens that are made from the same antique wallpaper from the house on 67th Street.” He would then realize that it was his job to retrieve them from whatever antiques dealer had put them online. “So I would, and she would be excited and she would explain the whole dining room had to change because of the screens.”

Two months later, as he recalled, Ms. Vanderbilt would phone him once more about that particular purchase: “‘Do you have room for those screens?’”

For a Tony Nominee, an Apartment With a Sense of Drama